Democracy is possible only if people are free--engagement for reconciliation 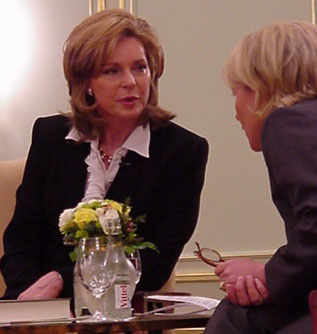 Queen Noor of Jordan in conversation with Marina Ruperti from the German television channel ZDF (Mona Lisa) on April10, 2003 in Berlin

Berlin/Washington (bpb) The Jordanian ex-Queen Noor has described as her greatest wish at this time that the war in Iraq should end soon, and the reconstruction would begin for a future of peace and freedom. "Naturally, also we in Jordan have been frustrated by the events", said on Thursday, April 10, 2003 the wife of the late King Hussein II, who had died of cancer. She has arrived the the German capital in order to introduce her new book, "In the Spirit of Reconcilliation."

"It is a long road to create democracy in a country like Iraq", said the American-born Queen, who had been married to King Hussein for 21 years and who gave him four children. People have to be prepared for democracy through education and economic progress. Without voluntary cooperation of every individual, and that means also of the women, no strong democracy can be built.

With her book, the 51-year old cosmopolically inclined Queen works toward long-term understanding and cooperation of the West with Arab countries. "In these times full of crises, I feel obliged to continue the engagement of my husband for peace and the Arab world", said Queen Noor in the hotel Adlon on the boulevard 'Unter den Linden' in Berlin. 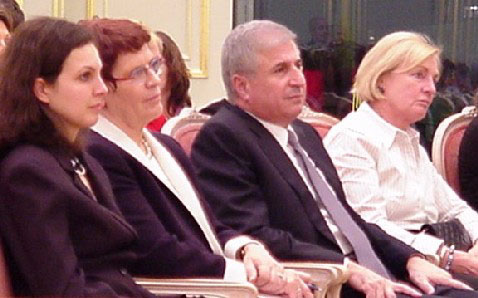 To the meeting with Qeen Noor came the former German President of the Parliament, Dr. Rita Süssmuth (center) and the Jordanian ambassador.

Queen Noor has information available on an official web site (http://www.noor.gov.jo/) about the work of the foundations which she established. The main themes are women and children rights, as well as international fight against poverty and cancer. She is a leading member of the American Cancer Society, which is similar to the German organization Deutsche Krebshilfe. "In the Arab world, cancer is still tabu as a topic for public discussion", she said. There is still much to be accomplished as far as education about health is concerned.

Queen Noor continued her public life after the tragic death of her husband due to cancer. She speaks English, French and Arabic. In order to be able to better manage all her international activities, Queen Noor has houses near Washington, D.C. and in London.