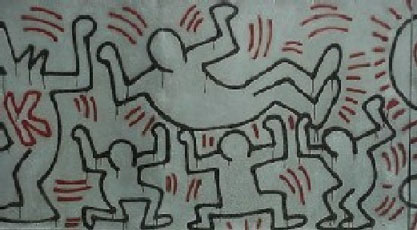 Keith Haring: Untitled, 1984. Detail from the work, one of the anti-war paintings by the US artist. Photo taken on March 28, 2003 accompanying the German Chancellor Gerhard Schroöder.

Berlin (bpb) The German Chancellor Gerhard Schröder has visited in Berlin on March 28, 2003 a new exhibition of paintings. To the exhibited works also belongs a monumental painting of the US painter Keith Haring; the work belongs to the group of his anti-war paintings. It was created in 1984 and due to the Irak War under the leadership of USA the artwork has regained a new validity. The painting now hangs in the Skylobby of the Chancellery, where Gerhard Schröder has his office.

Keith Haring made a name for himself on the international art scene with his match-like little men. First made in the style of a happy comic-book illustrations, later on he took on themes like war and exploitation until his death due to Aids in 1990. Often he left his paintings untitled, so that the observer can interpret them individually, he explainted once.

In the selected exhibition of paintings in the Chancellery are further included work by Georg Baselitz, Max Uhlig, Bernhard Schultze, Albert Oehlen, Walter Stöhrer, Emil Schumacher, Karl Horst Hödicke, Dieter Hacker und R.A. Penck. The works of art are on loan from the collection of Ulla and Heiner Pietasch. With this exhibition in the Chancellery, the art-collector couple has reached socially the highest ranks of art patrons. 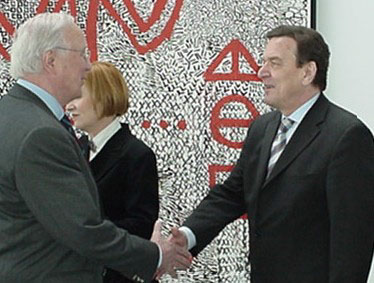 The German Chancellor Schröder (right) thanks the art collector Heiner Pietzsch on Friday, March 28, 2003 in the Chancellery in Berlin for loaning the works of art.

At the end of the tour, the German Chancellor Schröder Bundeskanzler Schröder thanked the art-collector couple for making the paintings available. He liked them very much. It is right to show also works of well-known German contemporary artists in the Chancellery, said Schröder. The international visitors can thus have a glance into what Germany has to offer in this area. Schröder was guided on the exhibition by Professor Peter Klaus Schuster, director of the State Museums in Prussia. He informed the Chancellor about the various styles of the artists.

According to his own words, the businessman Heiner Pietzsch from Berlin has used his profits from his art-dealership and investments also to put together a collection of modern art, with predominantly abstract and surrealistic art. He bought his first painting 38 years ago. In the meantime, it has grown into a collection of several hundred works and objects, worth millions. The businessman, born in Dresden has shown some 100 works from his collection in the fall of 2000 in the Dresden Castle. With this, the couple started in the footsteps of the greatest and most important German art-collector couple, Professor Dr. Peter Ludwig and his wife, Professor Irene Ludwig. The two enterpreneurs and art-historians have founded several museums, among them also the Museum Ludwig in Köln. The sculptor Arno Breker has immortalized Professor Ludwig and his wife in several portait busts.