Irak and USA: "About the origin of time" in the Gallery Ruf

Warnings about destruction of cultural heritage by war 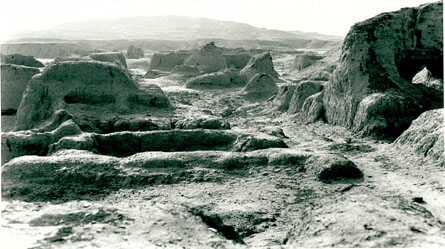 Haunted landscape with a long history: View of the remains of a thousands-years-old culture. The Enna area of Uruk, south of Bagdad, approximately 2,200 B.C.

Munich (bpb) The art gallery RUF in Munich has opened an exhibition with photographs of the artist Karl Weibl in March, 2003, which relate to the international conflict in the fight against terrorism between Iraq and the wolrd power USA. The exhibition is directed against a war in Iraq, because it would irreparably destroy the mankind's cultural heritage. At the same time, he opposes the destruction of historical areas in Iraq by the planned construction of a dam in the ancient settlement area of the land of the two-rivers of Euphrat and Tigris.

Emil Ruf, one of the leading art experts in Germany, made his gallery available for this idealistic project (Oberanger 35, 80331 München, www.galerieruf.de). für das idealistische Projekt bereit gestellt."The preservation of the cultural heritage of mankind challenges us all to become actively involved", says Ruf. The artist Karl Weible gives the following explanation about the peaceful initiative:

"In the time of great political conflicts between Iraq and the Western world, I would like to draw attention to a common cultural heritage: The art project "About the origins of time" should bring into our consciousness the threatened cultural treasures, which are being threatened by the impending war as well as by the planned Kakhul Dam, and maybe point the decision-makers to re-thinking of the situation.

The political dimension is an important part of this art project. It should contribute to the efforts to overcome the silence, arguments and agression by the means of a dialog about the things we have in common. "About the origin of time" should point to a future of mutual tolerance.

When thinking about Iraq, at once we have Saddam Hussein in front of our eyes. But our mental picutre of the country is one-sided and incomplete. The long, great history of the land, its unbelievable cultural treasures, the every-day life of its inhabitants--all that is hidden from us.

For years, I have been involved in my artistic work with making the course of time and the various time periods visible. A special eyecatcher is the glance at the cultures which lie in the past, and their continuing influence on our lives even today. For me as an artist, these ancient cultures are important roots in my own artistic understanding. Already years ago, in 1991, I have been working on Ur, the legendary city on the Euphrat. In "The Enki Temple of Ur", the time-period of these cultures were made visible.

In the framework of my work, at this time I would like to bring into reality my work "About the origin of time". The amazement at these rich treasures of our culture stands in its center. The power of these long-gone cultures will become ankered in our consciousness within the spiritual and political context.

Just in this time, in which our focus has been narrowed only to the conflict between the world power USA and the ruler of Iraq, it is necessary to turn our glance at our common cultural heritage. 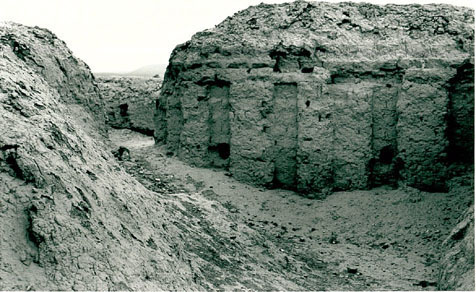 Glance at the remains of the royal palace of Kish, south of today's capital Bagdad. The building is from the early Sumerian Dymasty, approximately 2,500 B.C.

In the 18th and 19th centuries, all kinds of traces of the past have been dug out. Thus, the clay fragments of the Gilgamesh Epic came into the British Museum, the Diutu sculptures came to the Louvre in France, and the Ischar Gate of Nabuchadnezar II came to Berlin. It was, and remaint to be even today, a common culture of a civilized, global society.

The goal: to make us aware--using the medium of art--of this very likely loss of ancient cultureal treasures, due not only to the dam project, but even more so due to the possible invasion by the US troops. Today, in March 2003, one can only have the faintest idea, how great this loss will turn out to be.