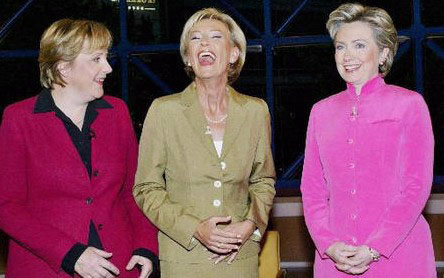 Hillary Clinton (right) was the guest-star of the political talkshow of Sabine Christiansen (middle) in the German TV station ARD. Together with them was the most prominent female politician Angela Merkel. At the meeting on July 6, 2003 there was the best atmosphere.

Berlin/London (bpb) The US Senator Hillary Clinton has introduced her memoires "Living History" in London and Berlin. In Germany she was treated like a superstar. The former first lady was the center of attention on the ARD-TV talkshow of Sabine Christiansen, who presents political themes of current interest. Together with them was the German opposition leader Angela Merkel, who has a very good relation to the US President George W. Bush.

Hillary Clinton was very statesmanlike. She answered in clearly and with courage, and according to the viewers of the TV show, she made an impression "like a diplomat". But she did not answer the question whether some day she would like to become the US President. Earlier, during her visit to London she made it understood that she does not plan to take part in the 2004 presidential elections. To the question, how does it look with respect to the year 2008, Clinton said on July 5, in the radio station BBC: "2008 is an eternity in the American politics." But she hopes to live to see the day, when her country elects a female president.

Hillary Rodham Clinton was supposed to come to Berlin already last December. She was invited by the President of Boulevard Metropolis, the Berlin publisher Stephan Vogel. The occasion was the first illumination of the linden trees on the historical avenue 'Unter den Linden', which runs between the Brandenburg Gate and the Castle Square of Berlin. For this, the lights of New York City were the example. The visit of the former First Lady reflects the concept of 'Boulevard Metropolis'--to connect the cities of Berlin, New York, Paris and Moscow through a network of cultural and social events, said Vogel in an interview with "Prometheus". 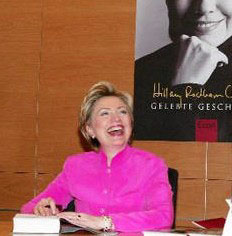 In good mood and full of patience, Hillary Clinton signed her memoires in Berlin. "Living History" is a bestseller both in Germany and England.

In Berlin Hillary Clinton presented her bestseller in the cultural bookstore Dussmann. But only 200 men and women who bought in advance admission tickets, had the chance to meet her. The senator did not answer any political questions during the signing. The enchanted book-buyers received an autograph and and look into the radiant eyes of the successful American.

Happy were on July 6, 2003 not only the Clinton fans and the ex-First Lady herself, but also above all the Econ-Publishers, who published the book. Out of the 150,000 copies printed, in four weeks about 120,000 copies were sold. In Germany, further editions will be printed. It is said that worldwide, the book has sold already some 3.5 million copies. Hillary Clinton was talking about the many friendly people she has met during her tour of Europe with stops in Amsterdam, Paris, London, Oxford and Berlin. "They said that they enjoyed not only my life story, but even more the depiction of the 40 years of American history."