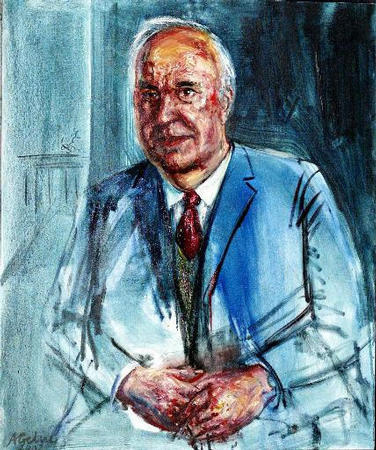 A shock for a visitor is the new painting of Helmut Kohl in the Ancestors Gallery of the German Chancellory in Berlin. The painter Albrecht Gehse from eastern Germany portrayed the statesman "fat and dumb-looking", criticized those who have seen the painting.

Berlin (bpb) An oil portrait of Helmut Kohl has been hanged in the Ancestors Gallery of German heads of government in the Berlin Chancellory. It is the ugliest painting among the series of his predecessors in office--Konrad Adenauer, Ludwig Erhard, Kurt-Georg Kiesinger, Willy Brandt und Helmut Schmidt. The painter Albrecht Gehse from eastern Germany painted it as a state commission. He described himself as a student of Bernhard Heisig, who had belonged to the leading and privileged state artists in the former communist German Democratic Republic.

Without any politically motivated thoughts, the art critics stated: Gehse has no talent for the historical portrait. From the sympathetic, strong-willed and intelligent statesman, Gehse portrayed the 'political grandson of Adenauer' as fat and dumb-looking. Both the fans and the critics of Kohl agree, that the Chancellor of the German Unification does not deserve this.

The German Chancellor Gerhard Schröder has not at all appeared at the hanging ceremony of this odd painting on the first floor of the Chancellory. He was working several stories up in his office. His State Secretary Frank-Walter Steinmeier said at the brief official ceremony on November 28, 2003 in the Chancellory, more from politeness that conviction, a few words. And Kohl did not come at all, since his successor Schröder did not want to see him at all. So, the former Minister of the Chancellory Anton Pfeiffer said a few words to praise the Kohl era. 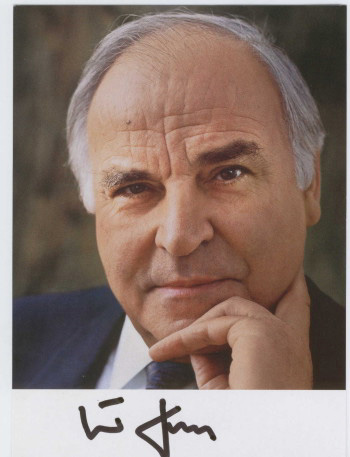 Helmut Kohl, the German Chancellor from 1982-1998. Just as he is: a dynamic, courageous and visionary statesman.

And now the painting, 130 x 110 centimeters in size, hangs on the wall on loan. According to information from Kohl, he himself paid for it. This way, a future Chancellor can later one exchange this monstrosity for a more worthy painting. This was done already once before, in the case of the SPD Chancellor Willi Brandt. The blood-red abstract painting by George Meistermann was exchanged for a realistic portrait by Oswald Peters. With the other artists, Hans-Jürgen Kallmann and Günter Ritter there were no objections. Also their works lie in the realm of quality, which has to be upheld in the portraiture: the immediate recognition of the model's personality, whether done as a painting or portrait in stone, bronze or marble.

It is odd to hear that Kohl himself has found this artist from eastern Germany. As it may be and whoever may have been his advosors: it was an absolute mistake. The result is a laughable carricature of Kohl in depressing and gloomy colors. Without a description, the painting could very well portray a blood-splattered butcher after slaughtering a pig. It is said that the former Berlin Senator for Culture, Christa Thoben (CDU) has advised Kohl to commission this painter. And the ex-Chancellor fell for it.