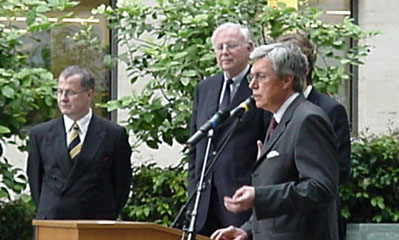 The Russian ambassador Sergei Krylov at the opening of the art exhibition on July 3, 2003 at the Foreign Office.

Berlin (bpb) The German Foreign Minister Joschka Fischer is the host of an exhibition "Russian artists see the German capital", which was opened on Thursday, July 3, 2003 at the Foreign Office in Berlin. The Russian ambassador Sergei Krylow describer the bilateral cultural relations as very good. "The common thousand-year old history of Russians and Germans has been influended by many encounters of the two cultures," said the diplomat in front of numerous invited guests. Fischer's State Secretary Jürgen Chroborg wrote in the exhibition catalog: "For us Germans, the look at the city through the eyes of Russian art provides an exciting perspective." 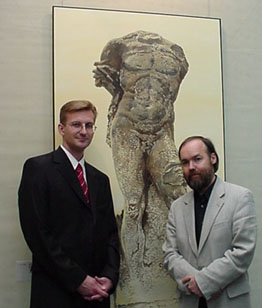 The Russian diplomat Michael A. Grabar (left) with the painter Genia Chef in front of one of his new paintings.

Much attention drew the new paintings of the painter Genia Chef. He is known as the most prolific among the participants of the show. After art objects, now Genia CHef turns his attention to painting. For this he has selected as motiv the ancient statues of Berlin, which have survived not only the end of Word War II with its gruesome destruction of the city, but also the post-war Germany and the communist DDR.

The European Art Foundation Berlin (EKS) has expressly welcome the engagement of the Foreign Minister Fischer for the promotion of the artistic dialog. Consul B. John Zavrel, as the director of EKS for international relations, said: "The cultural potential of Russia and the former east block states is very large. The mutual cultural exchange must became still stronger, above all with the Czech Republic. That would be very good for improving the relations of the people of both countries."

The sculptor Kurt Arentz, representing artists on board of directors of the EKS, in a message encouraged the public to buy more works of art by contemporary artists. "Culture can remain alive, only if the creators of art also obtain appropriate income for their works. An artist cannot live from praise alone." Government organizations should make an example by making such purchases. 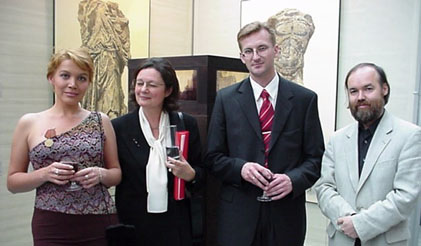 The gallery owner Dr. Marina Sandmann (with the white scarf) at the exhibiton opening with Genia Chef (right), the diplomat Michael A. Grabar and a Russian artist.

The concept for the exhibition came from the Sandmann Gallery in Berlin. The owner, Dr. Marina Sandmann is born Russian, who married a German and settled in Berlin. She is successfully engaged in the promotion of artists from her old homeland. The excellent photos in the exhibiton catalog came among others from Sascha Tschernij and Peter Noever. The Foreign Office, the Russian Embassy and the Commerz Bank have all supported the exhibition. "A good cooperation, which should be emulated by others", said Consul Zavrel.