Monumental sculpture at the Kleist Gymnasium in Berlin 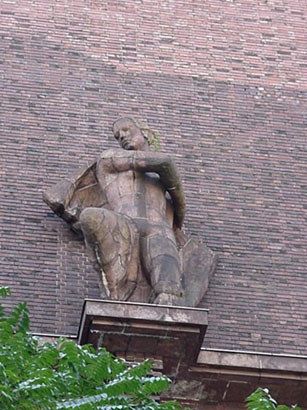 The sculpture of Penthesilea, the Queen of the Amazons by Josef Thorak has survived the bombing of Berlin and the war. Photograph from July 19, 2003. The light-colored bricks at the upper edges remind us of the bombing attacks during the war. The damages reached up to the sculpture by Thorak.

Berlin (bpb) The sculptor Josef Thorak created in 1927/1928 the larger-than-life sculpture of the Amazon Queen Penthesilea for the main facade of the Kleist Gymnasium in the Levetzow Street in Berlin. On this long, stretched out brick building, the sculpture has survived the bombing by the USA and Great Britain, as well as the Russian conquest during the heavy fighting for Berlin.

"Penthesilea" is one of very few sculptures of the Austrian sculptor Josef Thorak, which is still to be seen in the public. Thorak, who like Arno Breker and Georg Kolbe obtained public commissions during the Third Reich, belongs since 1945 to the publicly outlawed artists of the 20th century.

Penthesilea was discoverd by art historians in search after missing works of well-known artists. This sculpture is a larger-than-life figure of the legendary Amazon Queen in terra-cotta. The exact technique has not been identified yet. The Thorak Archives (www.meaus.com/josef-thorak-archiv.htm) request information about this artistic technique. The sculpture is composed from a number of sections.

Josef Thorak (1889 bis 1952) was, like his German-French colleague Arno Breker, a well-known sculptore already before the National Socialist times. While Breker works after the war again in Paris, Thorak lived in isolation in Bavaria and Austria. The commission for the sculpture Penthesilea for the Kleist Gymnasium, which was built in 1928, was a great public recognition for the artist. The builders have selected the sculpture of the Amazon Queen with a shield, in honor of the poet Heinrich von Kleist (October 18, 1777 - November 21, 1811). This tragedy Penthesilea appeared in 1808. It belongs till today to the great classical theater pieces of the Western culture.

Jewish memorial in the Levetzov Street 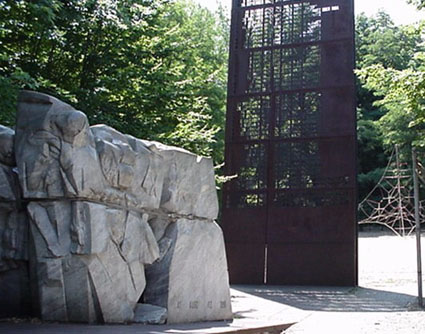 The Jewish memorial in the Levetzov Street in Berlin, in close vicinity to the Kleist building. The Penthesilea by Thorak can be found there. During the National Socialist times, Hitler's architect Albert Speer supported the Austrian scuptor Thorak.

The discovery of the Thorak sculpture makes plain, how in Berlin one can come across the memories of the high and low points of German history. In the Levetzov Street is located also a memorial which reminds about the deportations of Jews during the National Socialist times. The site is on the place of where the synagog was formerly located. The synagog was build between the years 1912 and 1914. According to Jewish sources, it had 2,120 seats and was one of the largest religious buildings in the German capital. It became a victim of the antisemitism during the Third Reich, and was largely destroye by the allied bombing raids on Berilin. Finally, it was razed down in 1955. Today stone monuments and memorial plaques remind about the National Socialist crimes. Next to the memorial stands the Kleist Gymnasium with the Thorak sculpture, which has miraculously survived the bombing raids.