The man who cremated Hitler's corpse died at 86 in Germany 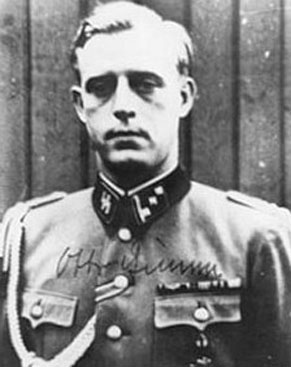 Berlin (bpb) Hitler's last adjutant Otto Günsche has died at the age of 86 years. According to confirmation from relatives, Otto Günsche's heart failed already on October 2, 2003. Günsche belonged to the closest circle around Hitler. He also spent the last hours with the German Chancellor in the Führer Bunker on April 30, 1945. After Hitler's suicide, Günsche set his corpse on fire, in the presence of the Chief of the Chancellory Martin Bormann.

Günsche lived in the most recent years withdrawin, as a widower in Nordrhein-Westfallen near Düsseldorf. According to a report from his close circle of friends, at the celebration of his 86th birthday on September 24, 2003 Günsche said that he felt "very well under the circumstances". Eight days later he died in his house in Lohmar. The corpse was cremated. It was announced that the ashes would be strewn into the North Sea, by the closest family. Günsche leaves behind two sons and one daughter.

Otto Günsche was born on September 24, 1917. In the German Army he made his carreer in the Waffen SS. As personal adjutant and SS Captain, Günsche was also in Hitler's vicinity at the assassination attempt of July 20, 1944 in the Wolfsschanze. From this day on, the adjutant was constantly assigned at the Führer's Headquarters.

After the suicide of Hitler and his wife Eva Braun and their cremation in the garden of the Reich Chancellory, the then 27-year-old Günsche left the Führer's Bunker on the evening of April 30, 1945, together with Hitler's #1 private secretary Gerda Christian. According to the description by Günsche, the two of them were able to escape from the bombed out Chancellory, under fire from the Soviet soldiers fighting in Berlin, through the undergound metro all the way to the station on the Friedrichstraße. There the ways of the long-time colleagues in Hitler's team separated.

Günsche spent several years as a prisoner in Russia. Gerda Chrisitan moved to Bavaria. There she was arrested and interrogated by the US miliraty police. Both of them found later work in the Rhineland area in private businesses. They stayed in constant contact.

Günsche lived very withdrawn. He did not participate in telling his stories from the Nazi times. In the circle of his friends he spoke openly about what he experienced. As a close eyewitness of important events with and around Adolf Hitler, he refused to talk to the so-called historians who just wanted to commercialize the times of the Third Reich. Only to a very close circle he gave important facts and information. These facts are still asleep in the archives of the former officer. Those who have personally spoken with Günsche had the impression that he was a correct, fine and reliable person. He was purposeful, yet modest, a good comrade and ready for sacrifice.