Olympia 2002: The Day when the Torch came 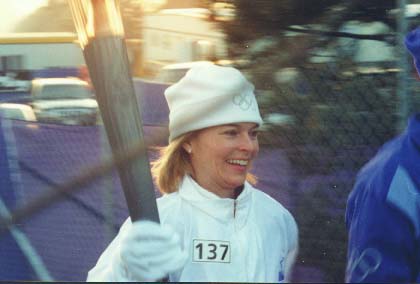 The Olympic Torch leaving the Olympic Village (where the athletes stayed) the day before the Opening Ceremony.

Salt Lake City (mp) AAAAAAhh, The Olympics…the last 2 days before the Opening Ceremonies on the 9th were rather quiet, everyone was just going abut their business. There wasn't a noticeable difference in security. The day before, the torch came through campus and the Olympic Village (where the athletes stayed). That was very cool. I felt like a photojournalist, especially at the gate and next to the media truck. I knew I was in awesome positions. The notes I wrote immediately after the torch came through the Olympic Village follow:

The torch came through the Olympic Village today. I was kicked out of my photo spot by a cop (right at the entrance to the Village). Shot the torch going into the village and then as it came out, crossing the Olympic Memorial Footbridge. The whole crowd, fans, cops and cameramen had sprinted from the village entrance to the footbridge exit. It then came through a gate, where I was standing. The torchbearer came through the gate. I was right there sticking my camera in her face. I was so close to her I could have lifted the torch out of her hand without moving an inch (Then I would've been the torchbearer!). She stopped right in front of me to turn and look around for a moment, that's when I realized just how close I was to her and the torch. I could see the details of the handle and I wanted to hold it to examine it more closely. The guy in charge of that leg of the relay was right there barking orders at everyone. I think I got some awesome shots of a lady in a wheelchair carrying the torch. I was crouched right next to the media truck carrying all the TV cameras, immediately in front of her.

The day of the Opening Ceremony was pretty quiet. Not in a weird way, but in the sense that everyone was quietly killing time until it was time to get things going. I sat in my room by the open window that faced the athletes' corridor (which was adjacent to my dorm) reading 'Ghost Soldiers'. I left the room at about 3:30 and headed towards Ian's apartment. Earlier that morning I'd walked the perimeter behind the library and talked to a Tucson border patroller through the fence for 20 minutes. Apparently a couple people had already tried to jump the fence early that morning. It was pretty calm except for two cops on 4-wheelers racing to attach something to the fence. They were very tense and in a huge hurry. --- Talked to another security guard around the corner along the side of the stadium, he said that the roadway in front of the stadium would be completely closed off.

'FF' to 3:30pm. Walking across campus, the athletes' corridor had been locked and flushed of deer early in the morning. It was full of cops. Passing by the Student Union there were maybe 20 soldiers and a couple of trucks. Behind the library there were maybe 25 soldiers on the steps facing the back of the stadium. I walked past, no problem. I walked through the media entrance area; a cop lifted the yellow tape for me, no problem. I got to Ian's and hung out with Ben and Jim for a while.

The final leg was a big secret

At about 6:00 (Opening Ceremony start time) we started walking towards Alyssa's apartment, but ran into Kevin and some other guys along the way.

Someone saw a torch relay truck pass by. From there we walked all over the neighborhood surrounding the stadium trying to determine the torch's path to it. Cops were on two street corners at every intersection. We talked to one cop. He was really cool and joked around about how he "doesn't know anything about the torch route." The final leg was a big secret. We found some of the President's security crew parked in driveway, tucked behind a pizza joint. Walking down University Avenue, right behind the stadium, the tourist bus "shuttle busses" were lined up everywhere, the length of the street. We walked all the way up to the main entrance of the stadium, right in front of the building that Tom Brokaw was doing his broadcast from. His set up was on the roof, with his back towards the stadium. Snipers were on many of the rooftops and cops were everywhere. This all took place during the first hour and a half of the show. Then, we went to Alyssa's (2 blocks from the stadium). From there 14 of us watched the Opening Ceremony on TV.

Throughout the broadcast we could hear the helicopters above the house as they expanded and contracted their perimeter around the stadium. We watched the fireworks launched on TV, heard them explode behind us, then we went out on the porch and watched all of the fireworks, launched from both ends of the stadium. One helicopter looked like it was right in the middle of the explosions, I thought it would get hit.

As the torch made its way into Rice-Eccles Olympic Stadium, Laura and a couple others ran to the front of the stadium and saw the Olympic Cauldron being lit &endash as the flame travelled up the spiral and into the cauldron. They were on the sidewalk directly in front of it.

After the cauldron was lit we headed to the apartment of a German post-doc, which was across the street form the stadium, and went to see the cauldron ourselves. &endash Beforehand it didn't seem like the Olympics were happening right here, it felt like any other sporting event. There weren't huge crowds in the streets around the stadium as I thought there'd be and traffic seemed non-existent. There were just cops everywhere, in their yellow jackets. Standing in the area in front of the stadium it was exciting to know that we were in the middle of a world-watched event, with Tom Brocaw broadcasting directly above our heads.

The next day I took TRAX into downtown. The security around the stadium was gone, moved elsewhere for the time being. I went to the Olympic Square to scope it out. It wasn't much different from other street festivals. The food booths were typical; there were some sponsor product display places.

The Coca-Cola sport simulators were cool, hockey, bobsled, and luge. I did the luge and met two girls from California in line. They'd driven into Salt Lake as the fireworks at the end of the Ceremony went off. They said the whole sky just lit up. It was kind of cool to see people from all over the world in their broadcast, team, and National Olympic Committee jackets.

Later that night I decided I'd try to get hockey tickets.

Early on Sunday morning, the 10th February 2002, I went to the Walker Center where the licensed ticket "brokers" were set up. Between them and Canada House, single $45 tickets were going for $210-350 (I'm not a very good bargainer).

Using my Buffalo connection to sweet talk the Canadians didn't help much. But I was offered a chance to mingle with the Canadian Women's Hockey Team in the hospitality room at Canada House, which I later passed up partially because I was scrounging around for tickets, partially because I'd lost the idealistic feeling about getting hooked up with tickets and at that point I "knew" I wasn't going to get any favors. It was all about the money, which is too bad because Andy, who was working at Canada House, had invited me to their hospitality room to meet the women's hockey team, but I didn't think the other workers would let me in, as it had gotten much busier when I returned and Andy wasn't around. In hindsight I should've tried anyway.

But I was also shooting the building banners that day and wanted to get back to campus. At 1:00, on the way back to TRAX, I stopped in one of the little restaurants to grab a bite but they were charging $8.95 for wings and $8.50 for mozzarella sticks. The Olympics are not friendly to college kids' pocketbooks. This day put a sour taste in my mouth regarding the Games, so far I'd had my fill of the downtown scene, it was all scalpers and pins.

My Olympia Diary of Salt Lake City, by Wesley Zavrel 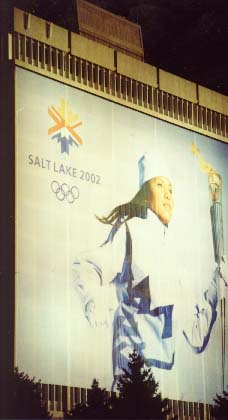 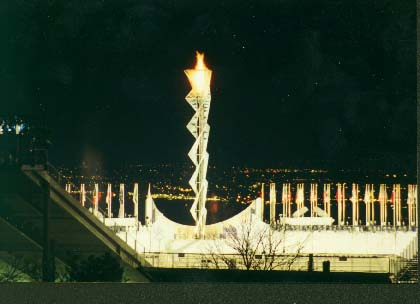 Olympic Cauldron viewed through the back end of Olympic Stadium. 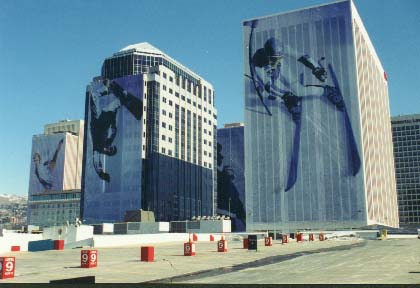