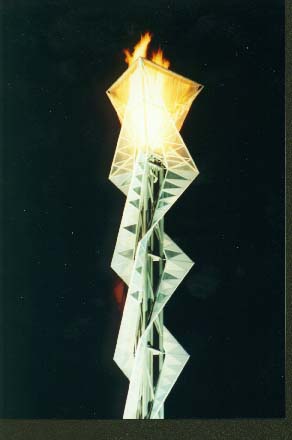 Olympic Cauldron viewed from sidewalk in front of Olympic Stadium.

Salt Lake City (mp). During the Olympic Winter Games from Febryary 8 to 26, 2002. Wesley Zavrel observed what was happening in the mountain city. The graduate student at the University of Utah at Salt Lake City went around with college friends and enjoyed the extraordinary events. He young American wrote in his diary as follows.

Today, Monday. 14th 2002, I got my first shots back. Those of the cauldron same out pretty well. Well enough that I'm considering getting slide film to catch it at sunset. The big news of today is the fact that I scored a major coup!! And did so purely by accident. About 10pm I called Alyssa's to see if any of them would want to go downtown tomorrow night to watch the moguls an TV. It turns out that they're going to it and have an extra ticket!

BINGO!!! Wes is going to the moguls after all!! I didn't pay scalpers' prices either just face value.

Woke up at 5am to get to Deer Valley for the moguls event. Went with Kevin, Laura, and her visiting friends John, Jeremy, and Jessica. Traffic went well, it was 4 degrees at 8:30 and warmed up to 24 degrees. Our seats were in the top row of the bleachers and the venue was great. We watched the first 1/2 of the Qualifying Round then I went up to the General Admission area for close-up shots of the bottom jump. At the end of the Qualifying Round, which was won by Springville/Buffalo native Travis Meyer, we hung out by the stage where a band was playing. After that we mingled around the finish area and saw one of the Japanese athletes, an American athlete passing out Rice Crispy Treats, and extreme skier Glen Plake.

Watching the final round from the grandstand was awesome. We watched the runs live, Jeremy shooting with a video camera and I shooting still pictures. We watched the replays on the large video screen. The camera work was awesome. Those guys really hauled and went big. Moseley pulled out his new trick, the dinner roll; it was a huge hit with the crowd. A Japanese guy goofed on the 2nd jump, caught an edge or something, and pulled off the save. Jeremy or John called it the 'egg roll'. That was a huge hit with the crowd. It got even funnier with the replays. That skier was greatly acknowledged by the crowd.

While we were leaving, American Evan Dybvig, who'd gotten hurt in qualifiers, was being carried past the NBC cameras on a snowmobile stretcher and John ran up and gave him a high five and shook his hand. We're hoping that it's on TV tonight. Today was such a great day. It was awesome. I realized a dream of mine. I say my favorite Olympic event and photographed it on a perfect day.

--- I just watched the moguls event on TV, they only showed 3 of the qualifying runs and 4 of the finalists. It was really pretty lame coverage.

They spent the same amount of time on Dybvig's injury as on the whole competition. There were a lot of little things that were missing: the injured Japanese skier, the guy who crashed, hiked back up a ways and hit the jump again, the near crashes that were impressively saved.

The coverage was less than satisfying, I'm very glad that I was a part of the largest crowd ever for a moguls competition. Tomorrow when I'm rested I'm sure that I'll really feel the excitement and satisfaction of having been there when I read about it in the paper.

I didn't know what to expect to from the Games, as far as what was going to happen that would define them. Only 5 days into it I've begun to see, mostly through reading the paper, what I believe to be the true Olympic Spirit coming through. Each day I've read stories of athletes who have won unexpectedly (young, inexperienced), proven veterans who hold numerous medals and are gold medal favorites losing very graciously and just enjoying the experience, and the athletes from non-traditional winter sport countries showing up without any expectations of winning anything and competing for the sake of living a dream, representing their country and having fun enjoying the experience. Athletes in mind are: the U.S. snowboarders sweeping the 1/2 pipe competition, the young British ski jumper following the steps of "Eddie the Eagle", cross country skiers from equatorial countries, the Japanese moguler who crashed, sidestepped back up to hit the last jump "...because it is the Olympics and I did it for pride and dignity", the German luger "The White Sausage" &endash (a 4 time gold medallist expected to become the first 5 time single event gold medallist) losing, then along with another luger, holding up the Italian winner on his shoulder, Picabo Street's classy acknowledgement of the crowd's support and her final race with a huge smile, the young Swiss ski jumper taking gold in both the K-90 and K-120 meter jumps, Jonny Moseley "just having fun being here on a glorious day with friends and family" and jumping into the crowd after his qualifying run. The only scar is the figure skating pairs scandal between the Russians and Canadians involving a French judge pressured into voting for Russia. But what's an Olympics without a scandal? I know I was waiting for this year's scandal. So far, no doping! The hockey tournament gets under way tomorrow…and the moguls crowd cheered for every skier on every run and just had a good time.

The surprise highlight was that KISS played. Talk about getting away from the Utah storyline… The absolute best part about it was the fireworks display at the end. It was awesome. Fireworks were launched around the stadium from 10 different areas of the valley. The whole sky had fireworks in it and all the smoke glowed in the light. It was very loud and very cool to hear so many simultaneous explosions going off all over. I was unexpectedly sad when the Olympic Cauldron was extinguished because I had enjoyed the drama of the Games and made a strong connection between the Olympic Spirit and the image of the Olympic Flame. The Olympic Cauldron very quickly became a significant sight in my view of the landscape as well as a permanent landmark in my memory. 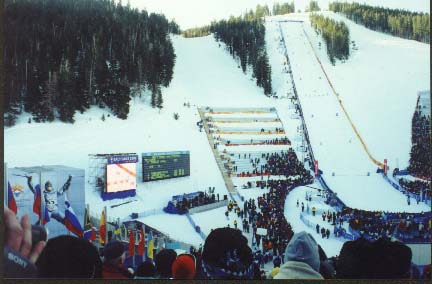 Freestyle Moguls course with scoreboard and replay screen. The crown to the right is practically touching the Aerials kickers. Looking at the general admission area, between the scoreboard and course, I took some shots from the second yellow banner from the top, all the way to the right. 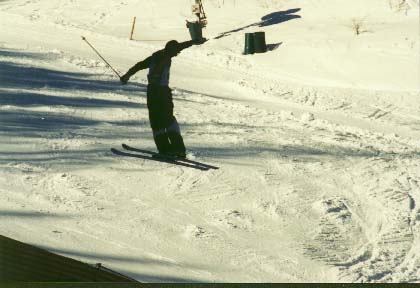 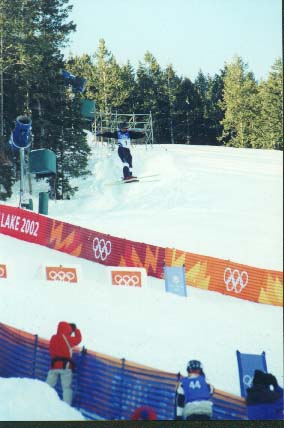 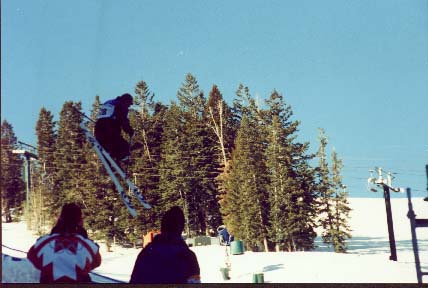 The closest you could get without a press pass. 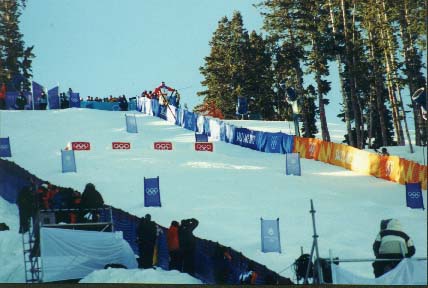 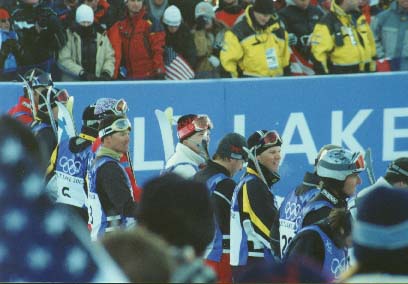 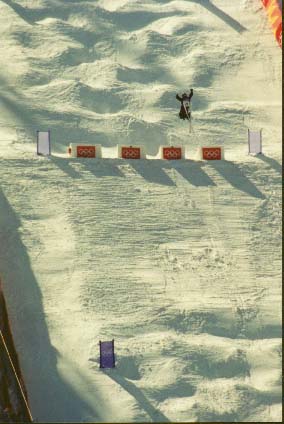 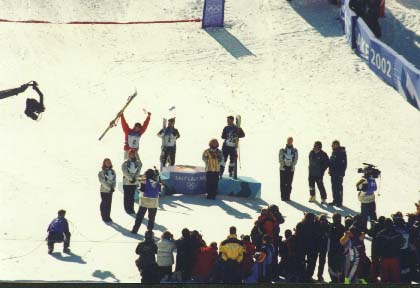