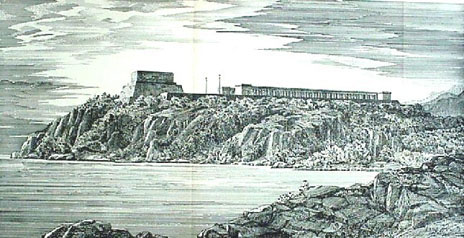 Temple Monument and Military Cemetery at Drontheim. Pen and ink drawing by Wilhelm Kreis from the year 1940

Berlin (bpb) The architect Wilhelm Kreis had in the 20th century the commission from the German government to set up monuments and military cemeteries to honor the soldiers who fell in the war. The large complexes in the form of temples and tombs of heroes were to be set up in North Africa, Greece, Poland, Russia as well as in northern and western Europe. Well-known scuptors like Arno Breker and Josef Thorak, as well as unknown, young artists were invited to take part. The projects were under the supervision of Hitler's architect Albert Speer.

Architekt Wilhelm Kreis wrote in 1941 in an article titled "About my drawings" about his ideas and plans. Following are some excerpts from it.

"These drawings from my hand are to serve to inspire my co-workers for the establishment of German military cemeteries. Up to now I myself have not taken up a complex as my own project, rather I plan to realize a great part of it by dividing the work among indepenent co-workers. A number of valued artists are working on this already. Beside older artists like Tischler and Thorak, also younger artists are included.

As far as the method of the work is concerned, with which I prepare such preliminary sketches, this can be said: the most significant suggestion and stimulation I get from actual physical observation of the battle-fields, where I drew at once by hand simple sketches by hand. At other times, I drew sketches also from memories and from recollection of what I had seen earlier.

At drawing, I do less thinking than I used to do at the first works of my youth. Before i can have an idea for a building, I must first know the grounds. But before I can bring an idean for a building on paper, I must virtually see it in my mind, with eyes closed. Only thus an idea for a building comes down on paper in only a few strokes, without corrections, drawn the the correct perspective. But it would be false to assume from this that the work is easy for me. That is not the case. But what agonizes me is the idea, which will not take a form. Then, in spite of all the long deliberations, it remains inaccessible..

Since I very strongly oppose original inspirations and am cautious toward the new, I search for a long time for a form of the thought about the building, until the end of the deliberation leads to a great simplicity. To compare these forms with the forms of the tradition is a benchmark. I consider this comparison the only possibility to find a standard for the authenticity and good quality of a new form. Most of the so-called good inspirations soon turn out to be illusions.

As a young student and a beginner I used to have many such inspirations, whose originality caused sensation, but in the end I myself came to recognize that back then only the novelty in it brought me joy, but with time neither the society nor I have come to obtain much joy from it. So I became mistrustful toward my "originality", and therefore first studied thoroughly and most seriously the sources of the ancient art, its origin, its first simple works as well as its last and most ripe works of art.

(An excerpt from the original text. Copyright 2003 Kreis-Archiv/Marco, Bonn) 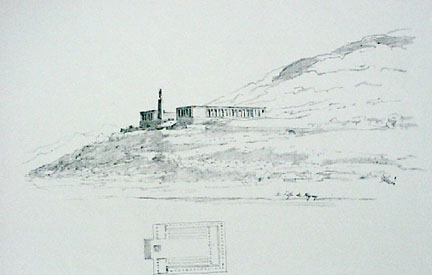 Wilhelm Kreis: At the foot of Mount Olympus. Proposal for a temple of honor near Olympia in Greece, 1941.