Jean Cocteau is a great success

After Paris, now Montreal presents the genius of poetry and art 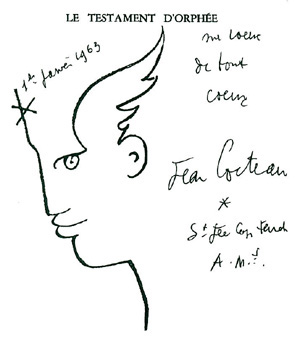 Montreal/Paris/Berlin (bpb) After the great success of the exhibition Jean Cocteau at the Centre Pompidou in Paris in 2003, the Montreal Museum of Fine Arts is presenting a show in honor of Cocteau, from April 15, 2004 to the end of August. The exhibition JEAN COCTEAU, THE UNIVERSAL CREATOR is held on the occasion of the 40th anniversary of his death. Cocteau died of a heart attack at age 74 at his chateau in Milly-la-Foret, France, on October 11, 1963 after hearing on the radio the news of the death of his friend, the singer Edith Piaf.

The director of the US-Museum of European Art, B. John Zavrel, welcomed this exhibition. "Our Museum and the European Art Foundation support all activities to bring European Art to USA", Zavrel said. "It is important to give the young generation a chance to come to know about artists from Europe. Their work and spirit have influenced most of the important artists in America. This exchange of inspiration should be kept alive."

Many institutes and museums care for the artist work of Jean Cocteau, first of all the Europäische Kultur Stiftung in Berlin. Together with the Coctau-Archive they have arranged the exhibition "Jean Cocteau &endash Illustrator and Author" in the Museum Europäische Kunst at Nörvenich Castle. (info@europaeische-kulturstiftung.org) On display are the great bronze portraits of Jean Cocteau, created by his friend, the sculptor Arno Breker. The bust exists in two version: life-siz,e and in a smaller version. Very precious objects are the beautiful hands of Jean Cocteau, made in bronze. (The exhibits are from the www.museum-arno-breker.org. Unfortunately, these important and most attractive works and objects are missing in the Montreal Museum. 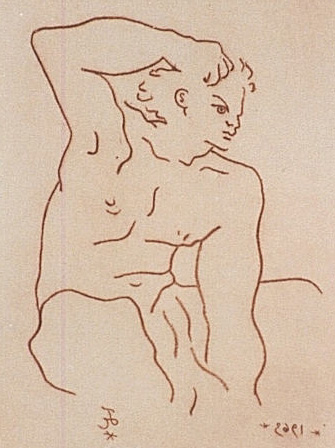 The beauty of youth: Apollo in front of the mirror.

Original Etching by Jean Cocteau, published in the deluxe edition by Marco-Paris. (marco-vg@gmx.de)

From Proust to Andy Warhol

He spanned the twentieth century from Proust to Andy Warhol. The exhibition at the Museum will reflect the abundance of Cocteau's oeuvre, in which disciplines and personalities cross-fertilized and influenced each other. As they did with the exhibition Hitchcock and Art, the Cogeval-Païni team has chosen a multi-disciplinary approach to the show, presenting a number of recreated décors and stage sets alongside the paintings and drawings. The exhibition will also feature a festival of Cocteau's films.