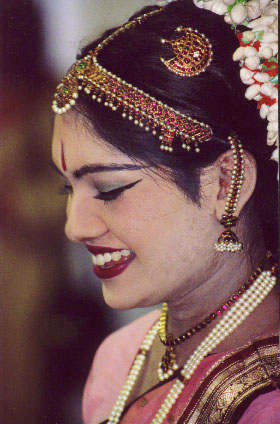 The 16-year old Suhasini Sumithra before the annual performance in Buffalo, New York. Her guru is Mrs. Tejaswini Rao.

Buffalo, New York (mea) NATYA, the school of Indian Classical Dance had the 2002 annual performance of the students of the guru Tejaswini Rao.

The performance of some 30 students, ranging in age from 5 to 17, was opened by the performance of 'Ganesha Kavuthvam', invocation to Lord Ganesha, the remover of obstacles. The dance was performed in the Kuchipudi style by the 16-year old Suhasini Sumithra, one of the most accomplished students in the group, who has studied this ancient Indian dance since the age of four.

This was followed by 'Ganesha Kavuthvam', prayer to Lord Ganesha this time performed in the Bharata Natyam style of dance by four dancers. 'Alarippu' was a dance demonstrating the basic techniques of the Bharata Natyam dance style.

Next was 'Natesha Kavuthvam'--a dance describing the Lord of Dancers, Nataraja. In Indian mythology, Shiva, a supreme being of many forms and natures, is Lord of both reproduction and destruction. One of his thousand names and forms is the Nataraja, the god of dancers, whose footsteps represent the endless cycle of creation and destruction.

In accordance with the tenets of Indian classical dance, an elaborate system of classification based on strictly specified combinations (karana) of hand gestures, head and eye movements, footsteps and body movements enable the dancers to express a wide range of feelings: heroism, sadness, wonder, laughter, fear, disgust, anger, peace, and so on.

Another dance depicted the ten incarnations of God Vishnu. In the Indian religious concept, the impersonal cosmic Brahman is personified as three gods: Brahma (the Creator), Vishnu (the Preserver) and the great Lord Shiva (the destroyer), the god of yogis and the husband of Parvati, who dwell on the top of Mount Kailas in the Himalayas.

In this dance, it is Lord Vishnu the Preserver, who reincarnates on earth when evil forces and unrighteousness oppress gods and men too much. He is shown in this ten incarnations: as fish, tortoise, boar, man-lion, dwarf, Parashurama, prince Rama--the ideal human being, Krishna, Budha, and Kalki--the rider on a white horse, the tenth incarnation who is yet to come to establish righteousness on the earth once more.

The performance concluded with 'Thillana', a pure dance with footwork executed in a fast rempo, interspersed with sculptural poses by the dancers Subanthini Fernando and Suhasini Sumithra.

The young performers were applauded by the proud parents and guests. At the conclusion of the dance, all the dancers were introduced by name, and each one presented a rose to their surprised and happy dance teacher--their guru--Mrs. Tejaswini Rao. 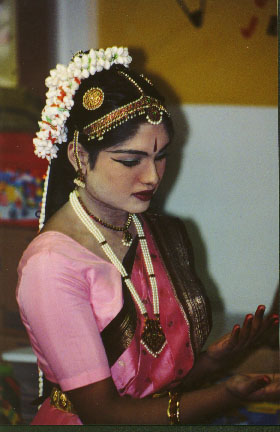 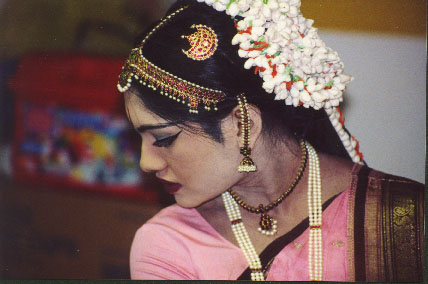 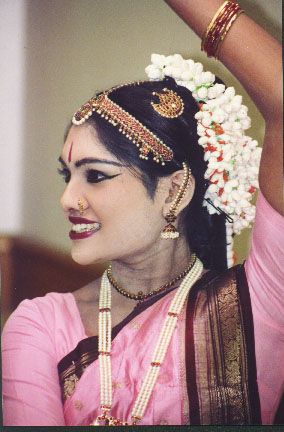