Rolf Dupuis on the trail of a century's fate 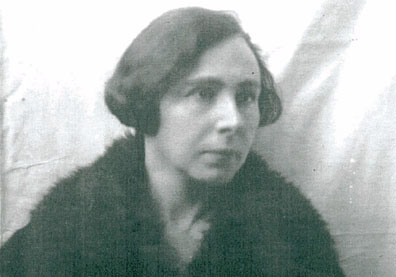 An intellectual artist, with talent for languages: Harriet Ellen Siderowna von Rathlef-Keilmann. Photographed in Berlin around 1927/1928.

Berlin (bpb) The life and work of the sculptor Harriet Ellen Siderowna von Rathlef-Keilmann is both a suspenseful and dramatic fate of a female artist in the 20th century. She was born in Riga on December 20, 1886 according to the Julian Calendar (the old style). After the russian November revolution of 1917, the Gregorian Calendar was introduced and with it the birthdate was moved to January 3, 1987 (the new style). After a life full of changes, the artist died on May 1, 1933 in Berlin, due to complications with her appendix.

The Berlin art historian Robert Alexander René Dupuis has been now for a long time on the search trail to discover more information about this talented, as well as beautiful woman. The purpose is a monograph about the life and work of this sculptor, said Dupuis in an interview with Prometheus. But this research is not simple. Nearly the whole work of the artist has been destroyed or lost due to the war and the political upheavals. For this reason, any information about this sculptor would be welcome, by e-mail to Rob.Dup.@gmx.de

Harriet Ellen Siderowna Keilmann grew up in a wealthy Jewish family with literary background in Litonia, which was till 1897 a province of the Czarist Russia. Litonia consisted of Kurland, Semgallen and Estland.

Already since her early youth she had an artistic vocation clearly in mind. Already at the age of 21 years she participated in art exhibitions in the Baltic Art Society in Riga. In 1913 she took part in an exhibition in Haus der Frau ("House of Women") in Leipzig. At the breakout of the First World War her husband Harald von Rathlef, who was a leutenant in the Regiment of the Alexander Hussars, was sent to the front in Finland. She stayed with her children living with her youngest brother in Russia. After years of insecurity, Rathlef-Keilmann managed to escape with her family on December 28, 1918 from Riga to Berlin. That way she was able to escape the consequences of the Bolshevik Revolution.

Already in 1919 she studied at the Weimar Art University, and was student in the art class of Prof. Richard Engelmann. In 1922 she got a divorce from her husband, because she saw no future with him for her artistic carreer. The following decade till her death was filled with activities, urges to create and social and cultural engagements.

Before that she received, on the recommendation of Walter Gropius, a tuition-free place at the school. But since her Professor Engelmann, together with some other old professors withdrew from the Bauhaus, she also left with them. In the year 1923 she went to Berlin-Charlottenburg. She moved there into an attic atelier of a large house with a garden, in the Kantstrasse 77. This place became her starting point for her new artistic work, with taking part in exhibitions in many cities.

The art historian Dupuis found out during his researches among others this: "Rathlef-Keilmann was also known for her unselfish engagement on the behalf of the alleged Czar's daughter Anastasia Nikolajewska Romanowa, after whom she looked from 1925 to 1927, as arranged by the interreligious philantropic circle around the Catholic theologian Dr. Carl Sonnenschein." Anastasia surfaced in Berlin, and eventually spent the rest of her life in the USA fighting for recognition as the Czar's daughter.

Yet the artistic work of Rathlef-Keilmann did not suffer on account of all her other engagements. This is proven by the list of names, places and institutions, which have been collected for the archives. So the name of Harriet Ellen von Rathlef-Keilmann surfaces among others in various connections with: Alfred Flechtheim, Käthe Kollwitz, Ernst Barlach, Moissey Kogan, Domgalerie Köln, Folckwang Museum in Essen, Kaiser Wilhelm Museum in Krefeld, the Getty Research Institute in Los Angeles, and others.The scultor belonged to those artists, who from the start refused the National Socialism and the politics of Adof Hitler.

The sculptor Rathlef-Keilmann in her last atelier in Berlin, at the address 'An der Apostelkirche 14', in the year 1932.

The last special exhibition of Rathlef-Keilmann took place in January 1933 in the Gallery Neumann-Nierendorf in Berlin. In the spring of 1933 she took part with her sculptures in an exhibition of the Society of Berlin Women Artists, and was a member of the jury at an art fair exhibition. Due to the political developments, she resigned from the Society of Berlin Women Artists. She wanted to emigrate from Germany, in order to avoid possible persecution by the National Socialist regime. After the sudden death of the artist, her studio was closed down and her works were sold in an auction. Some parts of her expressionistic sculptures and graphics were allowed to be given as presents to her artist friends and personal friends.