Over 175 U.S. Events Planned--Protests in More Than 50 Countries--Over 500 Groups Endorse Call to Action 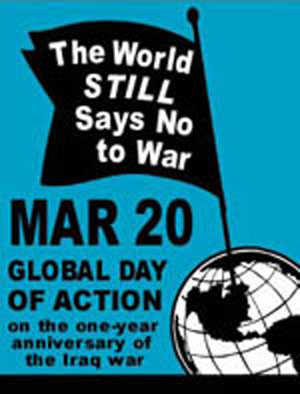 Momentum is building around the world for the Global Day of Action against War and Occupation on March 20, 2004--the one-year anniversary of the U.S. bombing and invasion of Iraq.

On that day, people on every continent will take to the streets to say YES to peace and NO to pre-emptive war and occupation. Joining with growing numbers of military families and soldiers, we will call for an end to the occupation of Iraq and Bush's militaristic foreign policies, and highlight the linkages between the occupations of Iraq and Palestine. March 20 will be the first time the world's "other superpower," as The New York Times described us, will take center stage since February 15, when more than 15 million people across the globe expressed their opposition to Bush's looming war on Iraq.

The March 20, 2004 Global Day of Action has been endorsed by the Global Assembly of the Anti-War Movement, the World Social Forum, and the 3rd Hemispheric Forum Against the FTAA. A vast and diverse array of organizations worldwide are hard at work mobilizing for the day.

In the United States, there will be a massive protest in New York City plus dozens of local and regional demonstrations across the country, including a major protest in Fayetteville, NC, the home of Fort Bragg.

Politically, the U.S. protests will also take on the domestic impact of Bush's foreign policies&emdashwhat some people call "the war at home." We will express the growing opposition to the USA PATRIOT Act, which has authorized political arrests, indefinite detentions, domestic spying, and religious and racial profiling. We will call for an end to the mass detentions and deportations of innocent immigrants in the name of fighting terrorism. We will say no to massive military spending amidst vast cuts in vital domestic social and economic programs.

HAVE YOUR GROUP ENDORSE MARCH 20