From the Venus from Willendorf to Birgit Sewekow

Women in the arts in the course of time 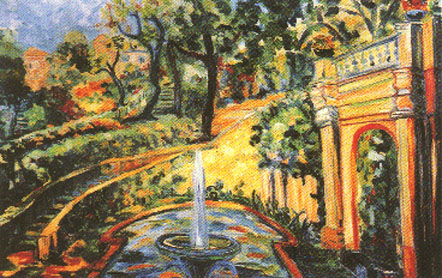 'Park at the Villa d'Este', an oil painting by Birgit Sewekow.

As long as human memory, women have been the object of depiction in art. As a popular example we can name the Venus of Willendorf. The limestone figure of a corpulent, naked woman, eleven centimeters high, was created about 25,000 years before the birth of Christ. It is one of the best known archeological finds. The miniature was discovered on August 7, 1908 at the dig at the remains of a settlement from the Palaeolithic Age near Willendorf, on the left bank of Danube, where the Willendorf brook joins it.

In all of the high cultures of mankind, women have been desired as art objects of sculptors and painters. In antiquity, a special rank was granted to them. The gods of Greece, the Germans and the Romans give the woman great importance in the artistic depiction. This applies also to the culture of the Egyptians, the Sumerians and the Hittites, as well as to the Asian and South African peoples. From the cultures of the Aztecs, among others, pictures of the goddess Coatlicue are well known. The discovery of a giant monolith in the year 1790 was sensational.

But there are hardly any traditions about what women themselves have achieved as artists. What remains is only suppositions and speculations. It is common knowledge that women in all the cultures developed special skills of the crafts, which again are stepping stones for higher development. Whether the recently discovered cave paintings etched in stone and colored with paints were created also by women or only by the hunting men of the prehistoric time is not known.

The woman as a creating artist begins to enter into the public consciousness in the 18th century. This continues in the 19th century. There were times when women were not admitted at all into art academies. At last, the emancipation in the 20th century finally brought greater acknowledgement to women in the fine arts. Women still continue to stand in the shadows of male sculptors and painters due to the traditional male society. However, in the history of art there has been no woman who has achieved -- by official commissions from church or state -- to remain in the public consciousness as an artist after her death. A comparison with such art giants of history as Michelangelo, Leonardo da Vinci, Albrecht Dürer, Arno Breker (1900 - 1991), Auguste Rodin (1840 - 1917), and Aristide Maillol (1840 - 1944) is therefore not possible.

In the great time span from Venus of Willensdorf to the painter Birgit Sewekow in the 21st century, lies a fantastic development of women in art. Every woman artist, who like Birgit Sewekow works seriously and intensively, is an encouragement for young talents to become independent and to go their own way.

A fascinating, but also tragic example of the dependence of a woman artist on her mentor is the sculptor Camille Claudel (8.12.1864 - 19.10.1943). At the age of 17 years, she came to Auguste Rodin (1840 - 1917). She became his best student and lover, until she found the strength to separate from him. Her sculptural work shows the influence of Rodin, and occasionally there is complete similarity of the works. That she eventually also worked on Rodin's sculptures, is from the viewpoint of art history not very publicized. A Hollywood film from 1989 remembers this admirable artist. Isabelle Adjani lends Camille her likeness in the film, and Gerhard Depardieu plays Rodin.

I would like to bring forward here in my contemplation about women and art a great painter: Bethe Morisot (14.1.1841 - 2.3.1895). In short: She was the first and the most significant woman among the Impressionists in France. Together with the American arists Mary Cassat (22.5.1844 - 14.6.1926), she is one of the most important women in the art of the 19th century. The friendship of Bethe Morisot with Edouard Manet (1832 - 1863) was inspiring for the creative work of both of these highly talented artists. In the circle of Impressionists with Claude Monet, Camille Pissarro (1830 - 1903), Alfred Sisley, Armand Guillaumin (1841 - 1927) and Frederic Bazille, she also met Auguste Renoir (1832 - 1863). He honored her with one of his most beautiful small etchings: "Madame Morisot".

If one glances back at the art scene, then the impression arises that in the 19th century and at the beginning of the 20th century the activities of men and women artists were especially strong. Above all, their names today fill the reference books. Yet it is quite correct to say that from 1900 not only men, but also women made names for themselves in the arts. But in comparison with the artists of the previous century they had it more difficult, since due to war and economic difficulties in Germany and Europe, fewer people could afford art. In the course of decades up to the present, the circle of art conscious citizens has become smaller. Therefore, those collectors who enjoy contemporary art have become more important today. They contribute to the preservation art and culture. "Artists and collectors are a unity," Picasso's art dealer Henry Kahnweiler in Paris told me.

In the 20th century, there were some outstanding women artists in Europe. To them belong the Germans Käthe Kollwitz ( + 22.4.1945), a sculptor who was born on July 8, 1867 in Königsberg in East Prussia, and Renee Sintines (1888 - 1965). The painter and graphic artist Gabrielle Münter (1877 - 1962) who from 1903 became the partner of Wassily Kandinsky also remained in consciousness. In the year of 1911 in Munich both of them formed with Franz Marc and Alfred Kubin (1877 - 1959) the heart of the association "Der Blaue Reiter." They represented, together with the exclusively "men's club" of the "Brücke Maler" the art movement of German Expressionism. In connection with "Der Blaue Reiter" stood the Russian painter Alexej von Jawlensky (1864 - 1941), whom consecrated an artist friendship with the painter Marianne Werefkin (1860 - 1983). She was born in the Russian town Tula, and in 1880 became a private student of Ilja Repin, who belongs to the most significant painters of the Russian realism. 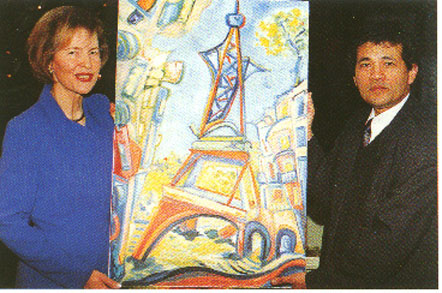 The painter Birgit Sewekow in her atelier in conversation with the editor Marco Bodenstein from Bonn, Germany.

A woman conceived the teacup from fur

Among the exotic women is the Mexican painter Frida Kahlo (1907 - 1954). Her unusual love affairs caused a sensation as well as her paintings. I count also the American Georgia O'Keefe (1887 - 1985) to the strong women in the arts. She enchanted us among others as the painter of flowers, blossoms and plants.

Among the vanguard women artists of the avant-guard, the Swiss painter Sophie Taeuber-Arp (1889 - 1943) takes a leading position. Although she stood in the shadow of her husband Hans Arp (1887 - 1966), after her death she was honored by being portrayed as the first woman on a Swiss bank note. Meret Oppenheim (1913 - 1985), who was born in Berlin, was a leading surrealist. Her most known object is 'Le Dejeuner en Fourrure' ('Breakfast in Fur Tea Cup) from 1936. This tea cup and a spoon of fur equally excites and raises indignation till today.

Among the German women, the painter Paula Modersohn-Becker (1876 - 1907) has above all provided for the exceptional reputation of the artist colony in Worpswede. She first moved into the village in 1898, where artists like Fritz Mackensen (1866 - 1953) had withdrawn as protest against art academies and the life in big cities. In Worpswede a friendship began between Modersohn-Becker and the sculptor Clara Westhof (1875 - 1954), who was married to the poet Rainer Maria Rilke. She is a pioneer among women sculptors in Germany.

Encounter with Leonor Fini and Stendar-Feuerbaum

Many women artists who can assert their place are known to me from personal encounters. Above all, I remember the painter Leonor Fini (1908 - 1996). The cosmopolitan is the only diva of painting in the 20th century. She was friends and acquainted with popular artists of her time like Jean Cocteau, Max Ernst, Salvador Dali and Ernst Fuchs. In Paris I also often met Marie-Elisabeth Wrede. She belonged to the circle around the poet Paul Valery and the literary couple Ivan and Claire Goll (1891 - 1977). She was also friends with the painter Robert Delauny and his wife Sonja Delaunay-Terk. This Ukrainian-French painter was a significant artist of the abstract style, and leading pioneer of geometric abstraction. In her works she stressed colors and light, after the famous example of Vincent van Gogh from the Netherlands.

In Switzerland I met the sculptor Renate Stendar-Feuerbaum. A great artist, who in her painting and sculpture shows the broad spectrum of her talent: It comprises abstract interpretation as well as realistic depiction according to the classical tradition. The European Art Foundation preserves her work in a separate "Renate Stendar-Feuerbaum Collection".

As for Germany, I would like to call special attention to the portraitist Helga Tiemann. She has captured in her paintings important contemporaries, from Konrad Adenauer to the American President Ronald Reagan and Queen Elizabeth II of England. Yrsa von Leistner remained an independent sculptor. She managed to bring into public places in Italy, Russia and Asia large sculptures and reliefs with sacral themes. Two more highly individual women are to be pointed out: the painter Elvira Bach, whom I visited in Berlin. She is the only woman worth mentioning from the group "Jungen Wilden" for being able to maintain her place. Both artist and manager is Marianne Pitzen. She founded the Women's Museum in Bonn, an establishment of this kind unique to the world. She wants to give a forum primarily to women.

And it is a pleasure to observe the work of Birgit Sewekow, which is full of vitality. In her atelier radiate colors, which even transcend the magnificence of the rainbow. In the gallery, landscapes and paintings of flowers hang harmoniously next to one another. The summer studio of the artist is ideal for her. It is a hothouse, with view of the garden with the manifold flowers. Here "stands" Birgit Sewekow often for hours at her easel. It is her peculiarity while standing to bring out the motifs lively and full of fire on the canvas. At this creative act the artist prefers tranquility. But Birgit Sewekow is never alone in her studio. As a silent observer in the room, her portrait in bronze watches her. The sculptor Kurt Arentz has made the portrait.