'Foxes in the henhouse' 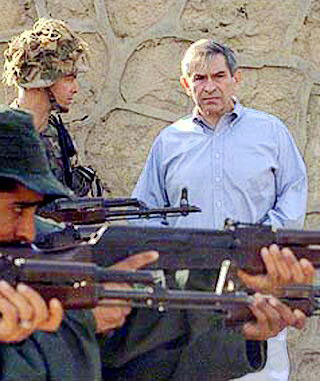 Nearly loses his life on an inspection in Baghdad: Paul Wolfowitz, one of the main architects of the disastrous US war against Iraq. With no end in sight, American soldiers are getting more and more disillustioned with a war that was started by the Bush administration on false pretenses and in spite of massive, worldwide protests again it in the spring of 2003. The renewal of MILITARY DRAFT of America's youth is only a matter of time...but for what??

(YellowTimes.org) &endash There have been many questions raised over the past few years concerning George Bush's level of competence, or lack thereof. People joke about his numerous linguistic faux pas, with some even pointing to his bastardization of the English language as evidence of his being an ordinary Joe, just like the rest of us. He may appear to be harmless, but the truth is, he is as dumb as a fox, and he and his gang of marauders have taken over and are destroying this country for their own personal ego-trips and profit.

In three short years, the U.S. government has gone from having a budgetary surplus to having the largest deficit in U.S. history that promises to overburden our nation for many generations to come, from being a beacon of hope for the world to being seen as the world's largest rogue nation that perpetrates its own form of willful international terrorism via military violence, from being a free and just nation to becoming more and more akin to a fascist state with fewer and fewer freedoms, greater government spying on its citizens and threats of endless incarceration based upon guilt by association to whatever arbitrarily labeled "terrorist" groups or organizations may be seen as a threat to those in power.

These wolves in sheep's clothing may talk about such nebulous, feel-good concepts as compassionate conservatism, but the only compassion they have shown thus far is towards the wealthy who lavishly support them and their bottom lines. They think nothing of flagrantly flaunting corporate cronyism by awarding political paybacks, most recently in the form of lucrative no-bid contracts in Iraq to the very corporations from which they hail and to which they themselves are financially bound. Such a practice under the watchful eye of a truly independent press would be exposed for the conflict of interests it is.

This administration is in the process of turning back decades of hard-won environmental progress either by failing to allocate the funds necessary to sue polluters, or by weakening or eliminating pollution rules altogether so that their campaign contributors can turn a hefty profit at the expense of the health and safety of the American people.

If it were up to Bush and Co., there would be no public programs of any sort -- everything would be privatized so that the wealthy few could then legally rob the public trust. Total privatization would mean that we the people would lose ultimate control over every facet of our lives -- from education to health care, from Social Security and retirement savings to workplace safety and living wages, from food production and labeling to the oversight of power production and the control of its costs and the access to affordable, clean drinking water. These corporatists would love to see the people reduced once again to serfs and vassals for the new age kings, the wealthy few who own and run these mega-corporations for their own profit. Their mantra of free, unencumbered trade is nothing but a smokescreen offering a free ride to the privileged elite at the expense of the poor, working majority.

Look around you as more and more American jobs, both blue and white collar, are sent overseas to exploit the slave wages and lack of environmental protections and labor laws of developing countries. We ourselves are slowly becoming a third world country, as defined by a tiny group of wealthy elites, many of whom live in gated communities, a large majority of citizens living in or on the margins of poverty, a soaring budget deficit, dysfunctional social programs, and a crumbling infrastructure.

These thieves think nothing of devouring one of their own if they feel they have been slighted, thus their unapologetic, not to mention highly unethical and unlawful, exposé of the identity of a CIA undercover agent whose husband was an outspoken critic of the administration's blatant misuse of bogus intelligence in its attempt to sell the Iraq war to the public. Columnist Robert Novak claims that it was not one, but "two senior administrative officials" who were eager to blow this woman's cover. Considering her crucial role in uncovering illegal sales and transfers of weapons of mass destruction around the world, one must question just how serious the claims are that this administration makes about combating terrorism and halting the spread of such destructive weapons.

If Bush were Clinton, Congress would have begun impeachment proceedings against him long ago. Clinton's lie about his affair with Monica ultimately hurt no one but himself and his family. Bush's lies about Iraq have cost us the precious lives of hundreds of American soldiers and thousands of innocent Iraqi civilians, with no end to the costs of the current quagmire in sight, in terms of both money and lives. If that's not grounds for impeachment, I don't know what is.

The truth is, our spineless Congress is a large part of the problem by aiding and abetting Bush in his escapades and giving him virtually everything he asks for. If Bush and Co. are allowed to continue on their rampage, there will be nothing left but a trail of hardship and destruction as far and as wide as the eye can see. It seems everything this current administration undertakes turns into a major fiasco.

The foxes are devouring everything we hold dear in this henhouse of ours. When are the American people finally going to wake up and drive these destructive egomaniacs from power?

Doreen Miller lived, studied, worked and traveled abroad for several years, and is currently a Senior Lecturer and educator of international students. She dedicates part of her time to serving the elderly and Alzheimer patients. Mother, musician and poet, she pursues an avid interest in Buddhist and Eastern philosophy. She advocates human rights, social justice, fair trade, and environmental protection. Doreen lives in the United States.

YellowTimes.org is an international news and opinion publication. YellowTimes.org encourages its material to be reproduced, reprinted, or broadcast provided that any such reproduction identifies the original source, http://www.YellowTimes.org