Prince Felipe on a visit in Germany 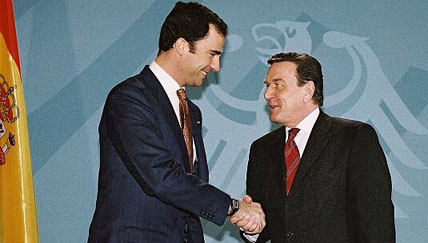 The German Chancellor Gerhard Schröder greets in the Chancellor's office Spain's heir to the throne Felipe on an official visit in Berlin.

Berlin (bpb) The Spanish Crown Prince Felipe made a visit to Germany from March 11 - 20, 2003. It was the second official journey of the 35-year old to Germany. During his first visit in 1991, Felipe the Prince of Asturias opened the exhibition "The Royal Dali Collection" of the European Art Foundation in the Art Museum at the Nörvenich Castle near Köln.

In Berlin the Prince was also received by the German President Johannes Rau at the Bellevue Castle. In addition, the Prince met the German Chancellor Gerhard Schröder on March 19th in the Chancellor's office for an exchange of political opinions. "I am very happy to be able to greet here the Spanish heir to the throne. I had already the honor to meet him, as well as the royal family in Spain", said Schröder. On the Prince's program was also the visit to the German Parliament, a concert in the Philharmony, the opening of the Spanish Cultural Institute Cervantes in Berlin and the signing of the Golden Book of the City.

The current Mayor of Berlin Klaus Wowereit appreciated the visit of Felipe: "The German capital pursues intensive and many-sided contacts to Spain. Berlin has been a sister-city of Madrid since 1988.

The European Art Foundation greeted the opening of the largest Spanish cultural institute by the Prince. This institute will enliven the cultural dialog between Germany and Spain, and will serve European unification, wrote the President of the EAF John G. Bodenstein to the Prince. "We like to remember your visit with the German Foreign Minister Hans-Dietrich Genscher in 1991 at the Nörvenich Castle for the opening of the Dali Collection, whose patron we value you ever since that time", was written in the letter. "In this solidarity the Foundation will arrange a Homage on the occasion of the 100th Birthday Anniversary of Salvador Dali in 2004. 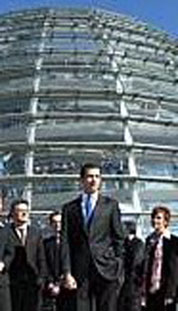 Prince Felipe in front of the Reichstag, the German Parliament.

On his visit to Berlin the Prince Felipe said he liked it. Naturally, one cannot see everything one would like to see in such a short timespan. The stay Prince's stay in Berlin was for him also the first encounter with the history of his family. The Spanish heir to the throne has actually German blood in his veins. His German grandmother on his mother's side, the former Queen Friederike of Greece was the granddaughter of the last German Kaiser Wilhelm II. Felipe's grandparents, the late Greek King Paul I (1901-1964) and Queen Friederike (1917-1981) were the protectors of the international Alexander Order for Art and Science, which was re-affirmed during the state visit with German President Prof. Theodor Heuss on the Petersberg near Bonn on September 18, 1956. In 1991, Prince Felipe was awarded honorary membership.

The journey to Germany in 2003 stood under the shadow of the threatening Iraq war. Considering the start of the war, the planned final trip to the east German city of Dresden was cancelled. The Prime Minister Georg Mildbradt (CDU) and the city of Dresden were looking forward to welcoming the sympathetic Spaniard. The had a rich program prepared for the Bourbon Prince. But the post-communist PDS threatened demonstrations again the American Iraq war during the visit of Prince Felipe. The PDS criticized Spain for standing on the side of USA. Due to the expected war, Prince Felipe has returned from Berlin to Spain. 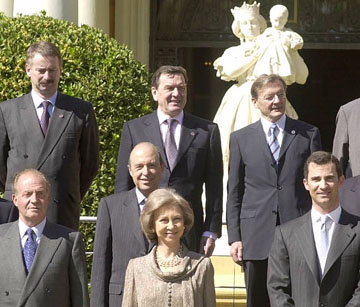