Europeans see the US as the biggest threat to world peace 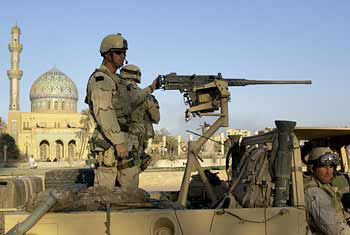 US occupation army in Iraq: seven months after "victory" was proclaimed by President Bush, American soldiers are coming under escalating attacks. The result: US soldiers feel betrayed and want to go home. The Bush administration is calling up over 120,000 reservists for duty in Iraq and are looking at plans to resume DRAFT of the young Americans.

EUOBSERVER / BRUSSELS - According to a poll requested by the European Commission, the majorityu of Europeans in the many various countries across the European Union believe the United States contributes the most to world instability along with Afghanistan, Iran, Iraq and North Korea.

The specially commissioned poll which asked citizens 15 questions on "the reconstruction of Iraq, the conflict in the Middle East and World peace", has caused controversy in Brussels.

Gen William "Jerry" Boykin, the newly promoted deputy undersecretary of state of defence for intelligence, who is in charge of leading the hunt for Osama bin Laden and Saddam Hussein has publicly declared that the Christian God is "bigger" than Allah, who is a false "idol", and believes the war on terrorism is a fight with Satan.

Gen Boykin has repeatedly told Christian groups and prayer meetings that President George W Bush was chosen by God to lead the global fight against Satan.

In January 2003, he told Baptists in Florida about a victory over a Muslim warlord in Somalia, who had boasted that Allah would protect him from American capture. "I knew my God was bigger than his. I knew that my God was a real god and his was an idol," Gen Boykin said. He also emerged from the conflict with a photograph of the Somalian capital Mogadishu bearing a strange dark mark. He has said this showed "the principalities of darkness. . . a demonic presence in that city that God revealed to me as the enemy".

On the Middle East, Gen Boykin told an Oregon church in June that America could not ignore its Judaeo-Christian roots. "Our religion came from Judaism and therefore Islamic radicals will hate us forever."

In the same month, Gen Boykin told an Oklahoma congregation that Osama bin Laden and Saddam Hussein were not the enemy. "Our enemy is a spiritual enemy because we are a nation of believers.. His name is Satan."