The simple, irreducible truth that the key place to fight terror is in your own country and its policies towards the world. 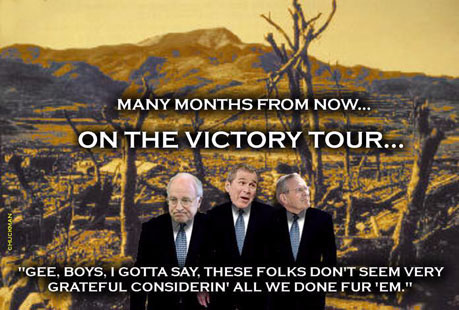 A cartoon by John Chuckman published before the US invasion of Iraq on March 20, 2003. A year later, it could not be more true. Americans are dying in Iraq every week.

There are a few special moments now and then in world affairs that lift your spirit.

One of these came with the fall of Romania's Ceausescu, former chum of Richard Nixon, known appropriately to his own countrymen as "the Dracula." His fall was, for me, the most poignant symbol of totalitarianism's collapse in Eastern Europe. When Romanian revolutionaries waved their national flag with its center torn out, I made a small copy and posted it on my office bulletin board.

Another such moment came with a speech at the United Nations just over a year ago by France's Dominique de Villepin. Behind the scenes, the U.S. had been using powerful dirty tactics to exert pressure on every member of the Security Council to approve and legitimize its threatened invasion of Iraq--a loan forgiven here, another called there, a project promised, a project withdrawn, and the Secretary General's office bugged. It did not seem possible the pressure could be resisted. But M. de Villepin spoke eloquently for the great majority of the world's people opposed to an illegal war. So when Bush started blowing up civilians in Baghdad, he was uncomfortably alone (Tony Blair counting for little either at home or abroad), and his acts were seen for what they were, a violent tantrum by America's neocons, serving no worthy purpose and loaded with unpredictable consequences.

Now we have the Spanish election and newly-elected President Zapatero's words about the Iraq invasion, words like "lies" and "stupid" that are inspiring for their honesty and directness. Truth in world affairs is rare, and Zapatero's comes after three solid years of numbing, depressingly-obvious dishonesty from Bush.

Zapatero has made the very reasonable demand, if Spanish troops are to remain in Iraq, that the United Nations must assume responsibility there. This is not only reasonable, it would serve the best interests of all involved in the mess the United States has made of the country--all, that is, but the madmen who created the mess.

Those Americans now busy building heated, Olympic-sized swimming pools with the proceeds of new defense contracts and their political allies of convenience, evangelical illiterates who hold that a fifteen-billion year old universe was created six thousand years ago--two pillars of Bush support--will now start their voodoo imprecations about Spain's giving in to terror. Democratic nominee Kerry, almost pathetically, has joined the mumbo jumbo, asking Spain's new government "to reconsider [its] decision [to withdraw troops] to send a message that terrorists cannot win by their acts of terror."

Nothing could be less accurate or demonstrate more backward logic. The appalling act of terror in Madrid rather has focused Spain on the simple, irreducible truth that the key place to fight terror is in your own country and its policies towards the world. It has brought Spain's people back to where they were before the previous government betrayed their interests to Bush.

What do I mean by "in your own country"? Few Americans recall that the nineteen men responsible for 9/11 entered their country on American visas. Little stealth was involved. A twentieth man with a visa was stopped by a single alert INS man suspicious of his frightening manner.

Americans forget that their 30-billion-dollar-a-year-plus intelligence apparatus failed to detect what these men were up to, even though there was some awareness of their presence. The failure is thrown into strong relief by the discovery that a large group of Israeli spies in the United States were on to the nineteen conspirators, and these Israeli spies should themselves have aroused American interest.

Americans seem unaware that such simple measures as re-inforced cockpit doors and/or upgraded security inspection at airports would have made 9/11 impossible. Saying this is not hindsight on my part. After years of new threats from Western Asia and after America's hurling a whole fleet of cruise missiles at Afghanistan, these changes were modest precautions advocated at the time. A quibbling, petty Republican Congress bears no small responsibility for the terrorists' success on 9/11.

No, for America's right wing, a pound of cure always is worth more than an ounce of prevention, especially where the cure involves blowing people up abroad. Chests swelled like bull walruses in mating season, they relish a demonstration of America's capacity for destruction, and, when you combine that with an exciting new opportunity for local defense contractors, it makes an irresistible legislative package. I recall a comedy skit by the late John Candy with Toronto's Second City before his success in films in which he and another comedian played backwoods types watching explosions and exchanging comments like, "That blowed up real good!" "Yeah, real good!" The skit brutally sums up the response to 9/11.

You don't learn a lot by blowing people up. After killing thousands of people and destroying the livelihoods of millions of others, what has Bush learned about the perpetrators of 9/11? Not much. To this day, there is no proof that bin Laden was even involved in 9/11. His guilt has been assumed and repeated, over and over, in the American press to the point where it is taken for granted by the public. I don't deny the possibility or even the likelihood, I just remind readers that we genuinely do not know more than two years on.

As for Saddam Hussein's dealings with 9/11 terrorists, we know to a certainty he never had any. His secular outlook on the world was utterly incompatible with religious fundamentalists like bin Laden. They hated each other, just as the Muslim clerics of Iran's revolution and the secular Shah hated each other. Bush and his grotesque band of armchair killers know this as well as I do, yet they have lied countless times suggesting otherwise.

So I am heartened by Zapatero's step onto the world scene speaking truth. I know the silk-suited Christian warriors in the White House will do everything they can to discredit him, because his words starkly reveal the nakedness of their emperor. He can be sure the CIA will pour resources into Spain's opposition party. No niceties about democracy will hold them back, any more than they did in Haiti.

As for the man who would be emperor, voters in the great American democracy get the splendid choice between Bush and a more polite "me too."