David Hasselhoff supports a Charity Gala for children with cancer 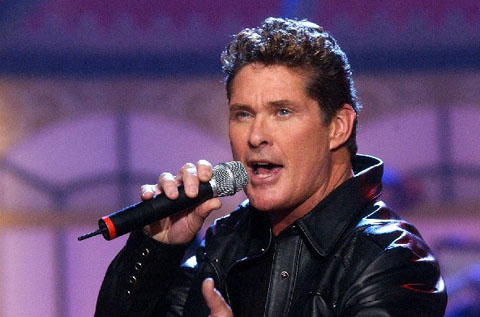 The American movie star David Hasselhoff appeared in the television show to support children with cancer. One of his songs is "Rhinestone Cowboy." He and Pamela Anderson are among the most popular American actors in Europe.

Erfurt / Bonn (bpb) Help for children with cancer: this is one of the main goals of the leading German Cancer Aid (Deutsche Krebshilfe) in Bonn. In the national television show "Melodies for Millions" (Melodien für Millionen) the president of the organization, Prof. Dr. Dagmar Schipanski, achieved a new success in the international fight against cancer.

Schipanski was supported in the charity show by international artists such as David Hasselhoff (Baywatch Hawaii) from USA, Vicky Leandros (Greece), the Comets band of the late rock star Bill Haley (Great Britain), and famous continental singers such as Michelle, the Flippers and the MDR Ballet.

Two things were important for the success of the event on March 13, 2004: the show-master Dieter Thomas Heck and the subject he was talking about: "Children suffering from cancer." This is a great problem not only in the so-called rich European countries, but also as in USA.

Dr. Schipanski reminded the viewers that much more must be done for these sick children. Germany is a good example of what can be accomplished by the engagement of the Deutsche Krebshilfe, a non-government organization.

The new fundraising campaign will help support the establishment of new hospitals specializing to help these sick children and their parents. "All those who donate money to our organization can be sure that we will spend each and every dollar as soon as possible for the various useful projects for the benefit of the sick children", said Schipanski.

During the TV show, people donated laready over 1.7 million Euros (about 2 million dollars) for the Children Cancer Aid (Kinder-Krebshilfe). After the show, president Schipanski herself remained at the telephones in the call-in center of the ZDF television channel to talk with people and accept their donations. Director Gerd Nettekoven, member of the Schipanski Team underscored that "We are interested in good, direct contacts with those for whom we work."

The televison star David Hasselhoff was knew personally Dr. Mildred Scheel, the late founder of the German Cancer Aid. „I like to engage myself for good goals." Hasselhoff said: "Cancer is a disease which any of us can get. Dr. Scheel was a woman of vision. She became a pioneer in the international fight against cancer."

The Deutsche Krebshilfe (German Cancer Aid) was founded in 1974, reminded the press spokesman, Dr. Eva Kalbheim. "The goal of this non-profit organization is to fight all forms of cancer", she said.

Donations for the Children Cancer Aid can be made by sending a check to: