A Dali Morphosa of the Royal Dali Collection 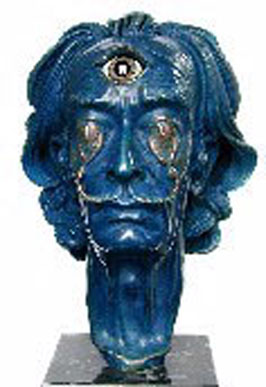 Dali Morphosa Dali-Eye: A transformation of the portrait into a new form. Dali added his own imaginations to the portrait by Breker and transformed it.

New York (bc) A 'Dali Morphosa' is one of the most attractive works reminding us about Salvador Dali. Metamorphosis is a transformation of a subject into a new form. Dali used to practice this not only in his word combinations, but also in paintings and figures. To the authentic portrait bust which his friend Arno Breker did of him, he added some attributes from his own imagination, and called it 'Dali Morphosa'.

The fine bronze is one of a cycle of the private Royal Dali Collection. The work was seen for the first time in public at the inauguration of 'Homage a Salvador Dali' exhibition by Prince Felipe of Asturias at the Noervenich Castle.

Salvador Dali (1904-89) was a very educated person. He was interested in Greek mythology and familiar with the legends. Among them he became interested in Morpheus, the son of Hypnos, the God of Sleep. Morpheus is the God of Dreams, and has two brothers, Icelus and Phantasus.

Dreams were sent out to man passing through one of two gates: a gate of horn from which true dreams came; and a gate of ivory, from which false dreams came. Icelus gave man dreams of birds or beasts. Phantasus gave man dreams of inanimate objects. And Morpheus had the wonderful ability to assume the form of any and every human being, and his father sent him out into the night to appear as a loved one in the dreams of the mortals.

Dali, the Spanish painter, sculptor, graphic artist, and designer belongs to the most fascinating personalities of the 20th century. After passing through phases of Cubism, Futurism and Metaphysical painting, he joined the Surrealists in 1929. His talent for self-publicity rapidly made him the most famous representative of the movement.

Dalí's works included sculpture, book illustrations, jewelry design, and work for the theatre. Although he is undoubtedly one of the most famous artists, his status is controversial. Maybe that is just what he wanted to be.