The US war on Iran has already begun

Scott Ritter is a former UN weapons inspector in Iraq, 1991-1998, and author of "Iraq Confidential: The Untold Story of America's Intelligence Conspiracy", to be published in October 2005. 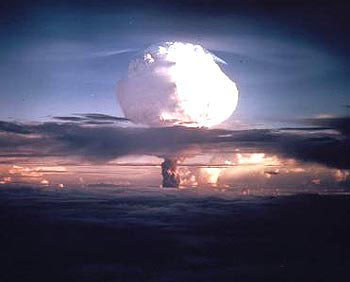 The Neocon cabal led by Richard Cheney and Donald Rumsfeld, which has hijacked the foreign policy of the George W. Bush administration, is making plans and looking for an excuse to use "small" nuclear bombs against Iran. There is concern that an all-out war on Iran will start in August, 2005 -- starting with massive, prolonged bombings. That, after all, is the favorite way in which the one and only 'Global superpower' likes to wage war against its enemy of the current year.

Americans, along with the rest of the world, are starting to wake up to the uncomfortable fact that President George Bush not only lied to them about the weapons of mass destruction in Iraq (the ostensible excuse for the March 2003 invasion and occupation of that country by US forces), but also about the very process that led to war.

We know now that this statement was itself a lie, that the president, by late August 2002, had, in fact, signed off on the'execute' orders authorising the US military to begin active military operations inside Iraq, and that these orders were being implemented as early as September 2002, when the US Air Force, assisted by the British Royal Air Force, began expanding its bombardment of targets inside and outside the so-called no-fly zone in Iraq.

These operations were designed to degrade Iraqi air defence and command and control capabilities. They also paved the way for the insertion of US Special Operations units, who were conducting strategic reconnaissance, and later direct action, operations against specific targets inside Iraq, prior to the 19 March 2003 commencement of hostilities.

President Bush had signed a covert finding in late spring 2002, which authorised the CIA and US Special Operations forces to dispatch clandestine units into Iraq for the purpose of removing Saddam Hussein from power.

The fact is that the Iraq war had begun by the beginning of summer 2002, if not earlier.

This timeline of events has ramifications that go beyond historical trivia or political investigation into the events of the past.

But the facts speak of another agenda, that of war and the forceful removal of the theocratic regime, currently wielding power.

As with Iraq, the president has paved the way for the conditioning of the American public and an all-too-compliant media to accept at face value the merits of a regime change policy regarding Iran, linking the regime of the Mullah's to an "axis of evil" (together with the newly "liberated" Iraq and North Korea), and speaking of the absolute requirement for the spread of "democracy" to the Iranian people.

"Liberation" and the spread of "democracy" have become none-too-subtle code words within the neo-conservative cabal that formulates and executes American foreign policy today for militarism and war.

By the intensity of the "liberation/democracy" rhetoric alone, Americans should be put on notice that Iran is well-fixed in the cross-hairs as the next target for the illegal policy of regime change being implemented by the Bush administration.

But Americans, and indeed much of the rest of the world, continue to be lulled into a false sense of complacency by the fact that overt conventional military operations have not yet commenced between the United States and Iran.

As such, many hold out the false hope that an extension of the current insanity in Iraq can be postponed or prevented in the case of Iran. But this is a fool's dream.

The reality is that the US war with Iran has already begun. As we speak, American over flights of Iranian soil are taking place, using pilotless drones and other, more sophisticated, capabilities.

The violation of a sovereign nation's airspace is an act of war in and of itself. But the war with Iran has gone far beyond the intelligence-gathering phase.

President Bush has taken advantage of the sweeping powers granted to him in the aftermath of 11 September 2001, to wage a global war against terror and to initiate several covert offensive operations inside Iran.

The most visible of these is the CIA-backed actions recently undertaken by the Mujahadeen el-Khalq, or MEK, an Iranian opposition group, once run by Saddam Hussein's dreaded intelligence services, but now working exclusively for the CIA's Directorate of Operations.

It is bitter irony that the CIA is using a group still labelled as a terrorist organisation, a group trained in the art of explosive assassination by the same intelligence units of the former regime of Saddam Hussein, who are slaughtering American soldiers in Iraq today, to carry out remote bombings in Iran of the sort that the Bush administration condemns on a daily basis inside Iraq.

Perhaps the adage of "one man's freedom fighter is another man's terrorist" has finally been embraced by the White House, exposing as utter hypocrisy the entire underlying notions governing the ongoing global war on terror.

But the CIA-backed campaign of MEK terror bombings in Iran are not the only action ongoing against Iran.

To the north, in neighbouring Azerbaijan, the US military is preparing a base of operations for a massive military presence that will foretell a major land-based campaign designed to capture Tehran.

Secretary of Defence Donald Rumsfeld's interest in Azerbaijan may have escaped the blinkered Western media, but Russia and the Caucasus nations understand only too well that the die has been cast regarding Azerbaijan's role in the upcoming war with Iran.

The ethnic links between the Azeri of northern Iran and Azerbaijan were long exploited by the Soviet Union during the Cold War, and this vehicle for internal manipulation has been seized upon by CIA paramilitary operatives and US Special Operations units who are training with Azerbaijan forces to form special units capable of operating inside Iran for the purpose of intelligence gathering, direct action, and mobilising indigenous opposition to the Mullahs in Tehran.

But this is only one use the US has planned for Azerbaijan. American military aircraft, operating from forward bases in Azerbaijan, will have a much shorter distance to fly when striking targets in and around Tehran.

In fact, US air power should be able to maintain a nearly 24-hour a day presence over Tehran airspace once military hostilities commence.

No longer will the United States need to consider employment of Cold War-dated plans which called for moving on Tehran from the Arab Gulf cities of Chah Bahar and Bandar Abbas. US Marine Corps units will be able to secure these towns in order to protect the vital Straits of Hormuz, but the need to advance inland has been eliminated.

A much shorter route to Tehran now exists--the coastal highway running along the Caspian Sea from Azerbaijan to Tehran.

US military planners have already begun war games calling for the deployment of multi-divisional forces into Azerbaijan.

Logistical planning is well advanced concerning the basing of US air and ground power in Azerbaijan.

Given the fact that the bulk of the logistical support and command and control capability required to wage a war with Iran is already forward deployed in the region thanks to the massive US presence in Iraq, the build-up time for a war with Iran will be significantly reduced compared to even the accelerated time tables witnessed with Iraq in 2002-2003.

America and the Western nations continue to be fixated on the ongoing tragedy and debacle that is Iraq. Much needed debate on the reasoning behind the war with Iraq and the failed post-war occupation of Iraq is finally starting to spring up in the United States and elsewhere.

Normally, this would represent a good turn of events. But with everyone's heads rooted in the events of the past, many are missing out on the crime that is about to be repeated by the Bush administration in Iran - an illegal war of aggression, based on false premise, carried out with little regard to either the people of Iran or the United States.

Most Americans, together with the mainstream American media, are blind to the tell-tale signs of war, waiting, instead, for some formal declaration of hostility, a made-for-TV moment such as was witnessed on 19 March 2003.

We now know that the war had started much earlier. Likewise, history will show that the US-led war with Iran will not have begun once a similar formal statement is offered by the Bush administration, but, rather, had already been under way since June 2005, when the CIA began its programme of MEK-executed terror bombings in Iran.