James Simon and the Nefertiti in Berlin 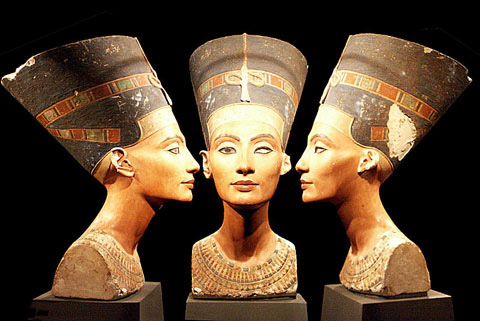 The portrait NEFERTITI is the main attraction at the Ägyptisches Museum in Berlin. But the Egyptian Museum in Charlottenburg is closed since March 1, 2005. It will be re-opened in the Old Museum (Museum Island) on August 13, 2005. In the meantime, Nefertiti can be seen in the special exhibition "Hieroglyphics around Nefertiti" from March 1 to August 11, 2005 at the Exhibition Hall Kulturforum on the Potsdamer Platz in the German Capital.

Berlin (bpb) Nefertiti, the world-famous bust of the Queen from the Nile, has found a new home in Berlin. For the 3,200 years old find we are thankful to the Jewish art patron James Simons (1851-1932). He transferred the ownership of the artwork from antiquity, which is 47 centimeters high, to the Ägyptische Museum in Berlin on July 21, 1920. To this was added the whole share of the find of the architect and Egyptologist Ludwig Borchardt in Armara (1907, 1911-1914).

This was made possible thanks to the archaeological digs of the Deutsche Orientgesselschaft (German Oriental Society), and above all the businessman James Simon. He was one of the main financial backers of the Society, which was very successful with its digs in Babylon and Palestine. The discovery of the bust has been entered into the diary of Borchard on December 6, 1912. Therefore, it is no wonder that in 2005 people are finally requesting that a streei in Berlin should be named after the generous James Simon. "It is about time to honor this man", said Dr. Ulrich Sewekow, a member of the board of directors of the German Oriental Society in an interview with "Prometheus". Simon is an example of the public spirit. "Making a lasting memorial to him should also encourage wealthy citizens of our time to use a part of their wealth to promote art and science, so that also the future generations can also benefit". 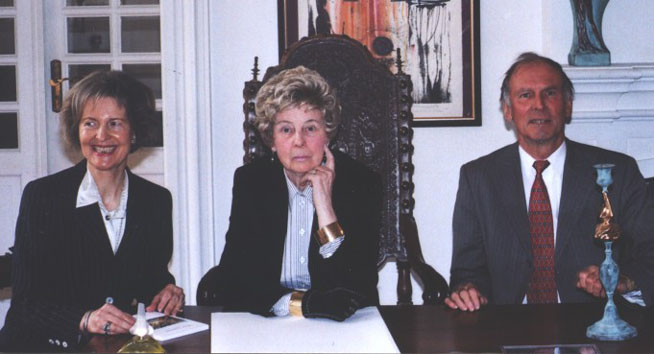 Engagement for the Jewish art patron James Simon: Dr. Ulrich Sewekow (right) from the board of directors of the German Oriental Society, the theolog Prof. Dr. Uta Ranke-Heinemann (Alexander Order) and the painter Brigitte Sewekow (left). The photo of these personalities engaged in art and culture was taken in 2004 at the Nörvenich Castle near Köln in Germany. The Nörvenich Castle is the meeting place of the international "Order of Alexander the Great for Art and Science", which was renewed by the Frenchman Roger Peyrefitte.

It was really a glorious moment for archaeology, when German Egyptologists made the discovery in 1912, some 300 kilometers south of Cairo, in Tell el-Amarna. Nefertiti has been resting for 3,200 years in the desert. According to the records, she was found in Building P. 47, Room 19 of the atelier of the sculptor Thutmosis. The sculptor Thutmosis is mainly known for his bust of Nefertiti, the wife of the "Heretic Pharao" Ekhnaton. Yet in his studio were found 30 additional realistic busts and plaster models.

This creator of portraits had already during his lifetime similar artistic significance as the sculptor Arno Breker in the 20th century, who in was unsurpassed in the way in which modeled portrait-busts of important personalities. It is fortunate that Thutmosis has been rediscovered by the Germans, and his famed has been reestablished after thousands of years.

Shortly after the discovery, the portrait was sent to Berlin, where it arrived at the end of February, 1913. At first, it was displayed for several months in the private residence of James Simon. Thus, the art patron is the only man in the world, who lived with this beauty for so long under the same roof.

The Jewish Simon family made their money in the trade of cotton. The was of secession in the USA led to a drastic shortage of cotton to Europe. The following cotton crisis in Prussia (1863/64) helped the Simon brothers to a huge rise in their wealth, thanks to the large quantities of cotton they had in their storehouses. From his love of art and passion for collecting, James Simon used most of his health to promote art. This way he was able to make generous donations. In this way he has rightly earned that among experts and in art history, his name remains connected with his good deeds.

For decades, the portrait of Nefertiti has been a favorite motiv for copies. One of the first copies Simon handed over on October 3, 1913 to the German Kaiser Wilhelm II. He was obviously as impressed as was the Egyptolog Borchard on the day he discovered it. About the original, he wrote into his work diary "It is useless to describe it, you must see it!"