Mother tips the balance against Bush 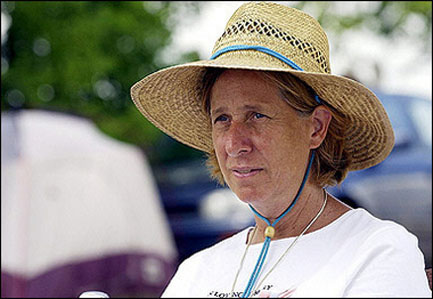 Cindy Sheehan: she has given people the confidence to speak out about the war that they didn't have before. Finally, its OK in America to be anti-war.

Candles were lit all across America last week in one of the largest single anti-war protests in recent US history. At more than 1,600 vigils tens of thousands of protesters gathered in solidarity with the woman who has been the catalyst for the rebirth of the anti-war movement: Cindy Sheehan.

Her remarkable one-woman stand outside George Bush's Texas ranch has turned into a national phenomenon--and one of the most vicious political slanging matches in recent US history. On the pro-war side, Sheehan has been derided as a traitor to America, betraying her dead soldier son's memory. On the anti-war side she has become a secular saint, laden with the powerful imagery of the avenging mother roused to action. For them, she is the lone soccer mom who is taking on Bush--and winning.

Either way, Sheehan is the most talked-about woman in American politics. She might also be Bush's worst public relations nightmare. For months Washington has been awash in speculation of a 'tipping point', when the majority of American public opinion turns finally and permanently against the war. Many now believe that Sheehan has provided that final push. 'It has definitely tipped now,' said Professor Steve Zunes, a political scientist at the University of San Francisco.

The power of last week's vigils was hard to ignore. They took place in areas as diverse as Grand Rapids, Michigan, and Oklahoma City. From outside the White House itself to tiny Concord, New Hampshire. From small towns in the Midwest to big cities on the coast, no state was left untouched. From Red States to Blue States, the effect was to galvanise the anti-war movement in a way nothing else has done since the American-led invasion more than two years ago.

Sheehan's protest began simply enough. Mourning the loss of her soldier son, Casey, in Iraq she camped outside the ranch where Bush is holidaying for the summer. She vowed to stay until he left or she spoke with him face-to-face. Pitting a lone protester against the President would seem to have been an uneven battle. But, as Sheehan's camp and cause swelled in numbers, she became the story of the summer. In Sheehan v Bush, it is the grieving mother who has landed the big punches so far.

Poll after poll shows that a majority of Americans believe Iraq has been mishandled. A Gallup poll last week showed 54 per cent believe it was a mistake to send troops to Iraq. Bush's approval ratings have slumped to the 30s. The analogy with Vietnam and the steady bleeding away of support for that conflict is a strong one.

'You can see that once support for the Vietnam war dipped below 50 per cent, it never came back,' said Professor Rick Stoll of Rice University. That has now happened with Iraq.

But questions remain on the political impact of the collapse in support for the war. With Bush in his second term and unable to seek re-election, there is no direct political pressure on him to change policy. 'A President can fight an unpopular war for years if necessary,' said Stoll. But many Republicans in Congress will be fighting tough elections in 2006. If the situation in Iraq has not improved by then, the war could become a millstone around the party's neck and inflict some serious losses. So far, however, there are few Democrat politicians advocating a swift withdrawal from Iraq.

But that could change as the anti-war movement spreads--and it is now attracting some powerful followers. Backing Sheehan in Texas are other parents who have lost children in Iraq. They have been joined by some Iraq veterans who have now left the military. FBI whistleblower Coleen Rowley has also arrived in Texas, as has Becky Lourey, another mother who has lost her son in Iraq and a state senator in Minnesota.

Many anti-war protesters believe their political clout can only grow as they start to run for office. They take as a lesson a recent local election in Ohio where an Iraq war veteran, running on an explicit anti-war platform, came within a whisker of defeating a Republican opponent in an area of the state where Republican support is strongest.

Republican analysts have responded with a ferocious attack on Sheehan and her supporters. This week an attack ad produced by a Republican strategist will start airing on CNN and Fox. It features Deborah Johns, whose son is serving in Iraq. Johns explicitly attacks Sheehan. 'Cindy Sheehan certainly does not speak to me,' Johns says in the ad.

Other attacks have been more brutal. Sheehan has been the subject of relentless assault by right-wing radio and TV commentators such as shock jock Rush Limbaugh and Fox TV's Bill O'Reilly. She has been accused of anti-semitism over remarks about America's policy towards Israel and dismissed as the dupe of left-wing groups.

The effect on Sheehan's personal life has been disastrous. She recently left her camp, vowing to come back, to visit her mother who has just had a stroke. Her husband has filed for divorce and members of her family have condemned her protest. Despite this, she has remained defiant. In a conference call with reporters last week she said it was worth it: 'I put myself out there and I'm willing to take it.'

She has certainly proved herself media savvy. It has helped that she has come to prominence in August when news executives are desperate for a running story and the White House press corps struggles to file stories during Bush's five-week stay at his ranch. She also has the practical help and backing of powerful liberal groups such as MoveOn.org. It is not every grieving mother who can organise national conference calls, appear regularly on national TV shows and run a sophisticated internet campaign that is probably now the anti-war movement's most powerful tool in organising events across America.

Sheehan has undoubtedly exposed deep fractures within the American public. But for every parent of a soldier in Iraq joining her, others have been swift to condemn her campaign. Some parents have travelled to Sheehan's camp to take down crosses commemorating their dead children.

One such was Gary Qualls, whose son died in Falluja. 'I find it disrespectful,' he said. A Crawford resident drove his truck over the field of crosses by the roadside. Yet another fired his gun over the heads of the protesters.

Yet Sheehan has become the lone voice that kick-started a chorus. Whether Bush agrees to her demand for a meeting (and it is unlikely he will) is now largely irrelevant. The political legacy left by her summer of protest will last far longer than the ramshackle tents of Camp Casey lining the roads outside Bush's ranch. 'This is now about far more than Cindy Sheehan. She has given people the confidence to speak out about the war that they didn't have before. Finally, its OK in America to be anti-war,' Zunes said.