A confident feeling for the connection between sculpture and architecture 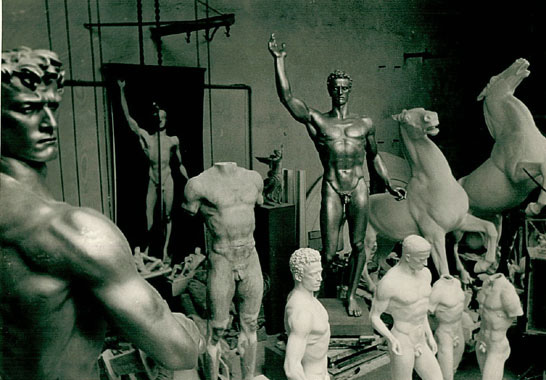 In the studio of Arno Breker in Berlin.

The unique success of the sculptor Arno Breker in the 20th century is also due to his abilities as an architect. As a young man, Breker (1900-1991) was master student of the famous German architect Prof. Wilhelm Kreis. Breker saw his studies of architecture in Düsseldorf on the river Rhein as an important complement for his ambitions to create sculptures for public spaces, as well as for churches, public and state buildings, and other structures. His visions have become clearer during his stay in Paris, then the world metropolis of Western art.

After professional stays in Paris and Rome, Arno Breker settled down in 1933 in Berlin. The painter Max Liebermann helped him to acquire the atelier of the deceased animal sculptor Gaul. For the Olympic Games of 1936, Breker created the large bronze sculptures „The Decathlete" and „Victory", which ornament as an eye-catcher the front of one of the representative buildings at the Olympia complex.

Shortly after the Olympic Games, Breker was invited to take part in projects regarding the architectural re-design of the Reich capital Berlin. The architect Albert Speer had begun the work on this enormous project, according to the conceptions of Adolf Hitler. The first building, which created a sensation, was the New Chancellery. At the main entrance stood two bronzes by Breker: The man with the torch, as a symbol of the flaming spirit, by whom a country should be guided. And a man with the sword, as a symbol of protection for the country and the readiness to defend its people. At an inspection shortly after the erection of the sculptures, Hitler gave the bronzes their official names: „The Party" (Die Partei) and „The Army" (Die Wehrmacht).

For the re-design of Berlin, Speer had enlisted also other leading artists of the time: Josef Thorak, Georg Kolbe, Richard Scheibe, Adolf Wamper and others. In the end, Arno Breker became the favorite. In 1972 Speer said about his cooperation with the sculptor: „The cooperation with Breker was smooth. He was intelligent, full of ideas and a great expert. He grasped the structural opportunities and architectural possibilities at the first glance. One often had to convince other artists, how and why a sculpture should be incorporated into the architecture. They were hard-headed, because basically they had no idea about the conformity of form and functionality."

Also Breker reminisced about this time of cooperation: „Speer took my advice without reservations. We both wanted to achieve that buildings and their sculptural ornamentation should form a harmonic unity, and bring joy to the viewer". In spite of all the harmony between Speer and Breker on the realization of the structural conceptions of Hitler, apparently Speer seemed to feel at times professionally threatened by Breker. The architect and Reich Minister said once jokingly to his close friend Breker: „If you ever start to design architecture, I'll kill you."

From success to defamation

The successful artistic engagement of Breker in the National Socialist times brought him much defamation in the public opinion after 1945. His fateful destiny, to stand in special favor of a dictator, was reproached to Breker by his critics until his death. Albert Speer, whom the victorious powers sentenced to 20 years in prison at the Nürnberg Processes, was able to publish his memoires after 1967, and then was much in demand by the media as an eyewitness.

Breker lived through the end of the Third Reich in 1945 in Bavaria, in the south of Germany. Back then, this region was under American occupation. He was prohibited to work as a sculptor. In spite of this, Breker again refused--just like he did in 1939--the offer of the Soviet dictator Josef Stalin to work in Moscow and Leningrad (now again St. Petersburg).

In the first years after the war, Breker earned his living as an architect. Most of the time he had to make his design in teams of architects and under an different name, in order not to be attacked and rejected. One such result is the building complex of the international insurance company Gerling in Köln on the Rhein, which was built during the government of the first post-war German Chancellor Konrad Adenauer. When it became known that the total concept was by Arno Breker, the building was named by the media the „New Chancellery" (Die neue Reichskanzlei). Eventually, Breker worked again in Paris and in Germany as a sculptor. He lived to see the opening of his „Arno Breker Museum" at the Nörvenich Castle near Köln. (www.museum-arno-breker.org)

In 1974, in an interview in Spain during a visit to his artist friend Salvador Dalí, Breker held the opinion that architecture and fine arts must harmoniously complement one another. Modern forms are not to be excluded, if they guarantee a humanistic space to live and work. „A building needs also sculptural ornamentation. The interplay of both elements gives the ensemble its own character. This is not so only with churches and monuments, but also with public buildings and public squares. The goal for both the architect and the artist should be: people must feel comfortable in this architecture", said Breker. He was of the opinion that aesthetics and beauty in architecture have timeless validity, because it appeals to the people most. „A healthy human being has the feeling for it in his inner self, or as one would say today, in his genes."