Europa on the Bull by Ernst Fuchs

A symbolically powerful artwork for the European Parliament and all citizens 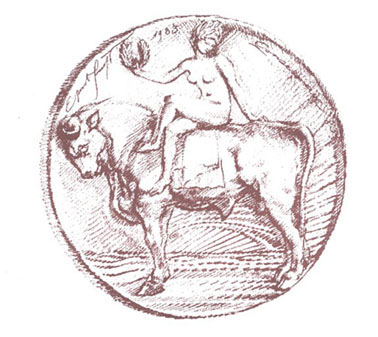 Berlin (bpb) The painter Ernst Fuchs has named the lithograph 'Europe on the Bull'. It was created in 1983 in connection with the design of a medal honoring Konrad Adenauer, the first Chancellor of the German Federal Republic. The artist-genius shows the Goddess Europe riding on the bull, into which Zeus, the father of Gods, has transformed himself, according to mythology and legends.

That means: Zeus arose from the sea in the shape of the bull. The beautiful Europe ornamented him with a laurel wreath, sat herself on the powerful animal and let it carry her. This motif has a great meaning for the European Parliament in Brussels, as well as the for European Union. Europe and the Bull is a powerful symbol not only for Europeans, but also for all educated people all over the world.

The lithograph is 29 x 22 centimeters in size, and served as an insert for a book. An exemplair is shown the the exhibition 'THE ARTISTS OF THE GOLDEN TRIANGLE', which includes the works of the artist friends Salvador Dalí, Arno Breker and Ernst Fuchs. It takes place in the Museum Europäische Kunst in Germany, www.museum-arno-breker.org

Ernst Fuchs belongs to the most significant painters of the 21st century. He is the founder and main representative of the Viennese School of Fantastic Realism. In his motifs, the European-Jewish artist turns also to biblical themes as well as illustrations of the Bible. The highly educated artist is also interested in the Ancient Greece and the classical era of the Western Christianity. To this belong among others paintings and stage sets for the operas of Richard Wagner. Fuchs lives in several places around the world, such as USA, Spain, Paris and these days mainly in Monaco. He is a Knight of the Alexander Order for Art and Science, to which belonged also the writers Roger Peyrefitte (France), Ernst Jünger (Germany/France) and Sir Peter Ustinov.