The film 'The Downfall' has Hollywood quality

Bernd Eichinger writes film history with his drama about Hitler 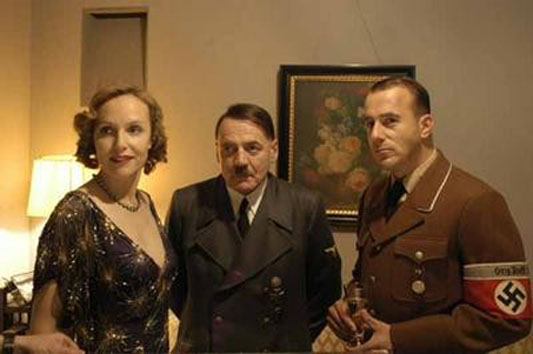 The last days of the Führer: Scene photos with actors playing Adolf Hitler, Eva Braun and Albert Speer in the Führer bunker in 1945 in the government offices area in Berlin.

Copyright for all photos: Constantin-Film, München

Berlin (bpb) Bernhard Eichinger has already written film history with his new film DER UNTERGANG. The historical drama about the last days of the dictator, German Chancellor and Führer in the Bunker of the New Reich Chancellory in Berlin in 1945 has the format of a Hollywood production. And yet, the production costs of only about $ 15 million would be for Hollywood only a low budget production.

The gala performance of the film, which is 155 minutes long, took place on September 12, 2004 at the Delphi Film Palace near the Berlin Zoo. The producer and script author Eichinger said with humility: "It is a work accomplished by many, and the success is due to all who took part in the film. He thanked the ARD Studio and other sponsors for their support, without which this would not have been possible.

Almost 60 years after the death of Adolf Hitler and the horrible events of the destruction of Berlin by the communist Soviet Red Army, finally has a German film director found the courage to address this delicate topic. The author and director stresses that he has made an effort to kept to the correctness and historical truth of these events.

But he has not always been successful in this effort, because he almost exclusively relied on the subjective depictions of the writer Joachim Fest. He is known in Germany as the "Pope" among the biographers of Hitler. Since the financially powerful publishers in Germany have been in the backgroud, the media in general have for decades accepted also the questionable depictions by Fest as being true.

Furthermore, Eichinger uses for the film memoires of the youngest of Hitler's secretaries, Traudl Junge. Her recently memoires, recently published also in English, were writte by the German journalist Melissa Müller. Even shorlty before her death, Traudl Junge was posing as the most important eye-witness of the "Untergang' -- the collapse. And yet, Junge was in the Führer Bunker thought of as a "kid" and even a "dummy from Bavaria". In spite of this, Eichinger builds her in his film a monument, as he has the highly talented actress Alexandra Maria play her part. But her Berlin dialect was not authentic.

For the insiders, the following are falsely presented:

1. The handing our of poisor pills personally by Hitler in the Führer Bunker,

2. The celebration parties in the crumbling Reich Chancellory,

3. The alleged chaos among drunk Wehrmacht soldiers in the Füher Bunker during Hitler's life,

4. The escape of Hitler's first private secretary Gerda Christian from the Reich Chancellory and Berlin.

Hitler's adjutant, the SS-Hauptsturmführer Otto Günsche, has denied shortly before his death in October, 2003 that Hitler had personally handed out the poison pills. Hitler's main secretary, Gerda Christian, whose maiden name name was Daranowski, stresses in her memoires "Behind the Gates of Powers" (up to now hidden under lock and key) that all this are only false stories. Both Günsche and Daranowski, who was affectionately called Dara by Hitler due to her Polish name, have always refused to speak with the writer Joachim Fest. 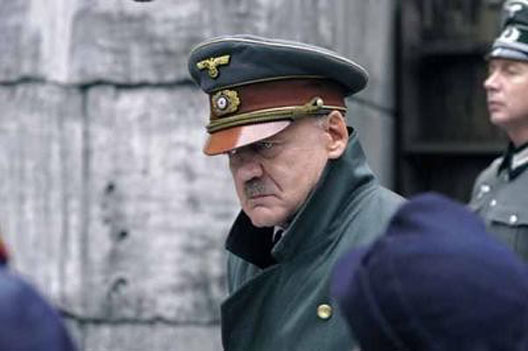 Film scene: Adolf Hitler (played by Bruno Ganz) at his last honor by young boys, ages 14 to 16. According to historical descriptions, during the street battles for Berlin, they destroyed Soviet tanks with hand-held granate launchers and were ready to die for "Führer, People and Fatherland".

The German Hollywood director Eichinger selected little known men and women to act in his film. At the gala opening, the guests saw on the runway people that one would not recognize on the streets. The successful selection of the actors by Eichinger and his advisors gives the viewers a powerful sense of authenticity of the events.

A fabulous contribution to the success of this film was made by Christine Rothe, the production director.Eine sagenhafte Mammutarbeit hat bei diesem Film Christine Rothe vollbracht, die Chefin der Herstellungsleitung. And what one can do with plain and homely people was magnificently shown by Waldemar Pokromski (make-up) and Claudia Bobsin (costumes).

The most difficult role had the Swiss actor Bruno Ganz as Adolf Hitler. He was obviously the best one, whom Eichinger could find. Despite this, his nose and cheeks were too big and fat, his hair was much too oily and the lascivious manner in which he moves his hair from the face in one of the scenes was rather embarrassing and historically incorrect. 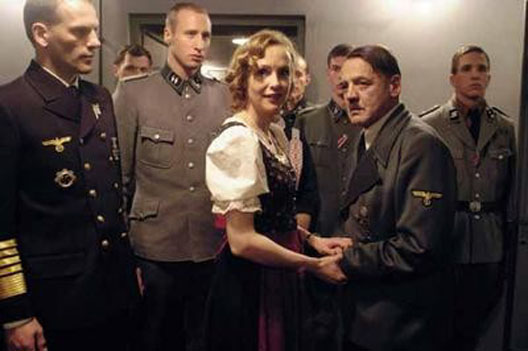 Film scene: Adolf Hitler and his newly married wife Eva Braun say good-bye to their co-workers in the Führer Bunker. Their suicide followed shortly. Hitler gave as his reason for the suicide that he did not want to fall alive into the hands of the Russians or the other victorious powers, and would rather go down with the German Reich.

In this film about the 'going down' of the "world's gretest monster, criminal and Jew murderer" Adolf Hitler -- people who have actually known at that time the personalities depicted in the film, or have met them later in life, will certify that the depictions were generally on the mark in the case of the Minister for Armaments and Hitler's architect Albert Speer (Heino Ferch), as well as Hitler's adjutant Otto Günsche. On the other hand, in the real life the elegant, slender and highly intelligent Gerda Christian was miscast by the script writer, who wanted to play up his star Traudl Junge (A. M. Laura), as a fat forced laborer.

Impressive was the acting of the Reich Propaganda Minister Joseph Goebbels (Ulrich Matthes) and his wife Magda (Corinna Harfouch). They both mastered the shattering depiction of the poisoning of their six children and their own suicide in a moving way. 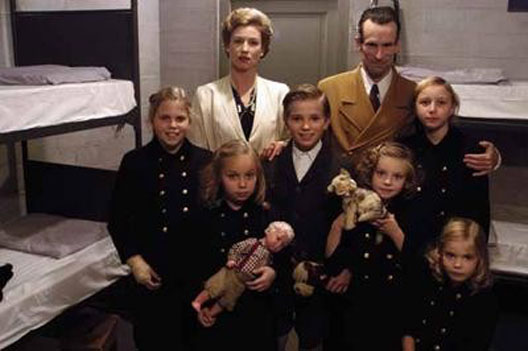 Scene photos from the movie 'Der Untergang': The family of Joseph Goebbels, which also said good-bye to life shortly after Hitler's death in the Führer Bunker. Magda Goebbels gave to the beautiful and happy children sleeping medicine and then the poison pills. Magda Goebbels, who had been decorated by Hitler as an exemplary and courageous mother, saw no future for her children's life after the end of the Third Reich.

After the movie premiere in Berlin there was a long, continuing applause for Bernd Eichinger, director Oliver Hirschbiegel, Rainer Klausmann (camera) and Christine Rothe (production). For the actor who played Hitler, Bruno Ganz there were even standing ovations. Among these were also many young people.