US unilateralism was a means of breaking the old order. Now it is building new alliances 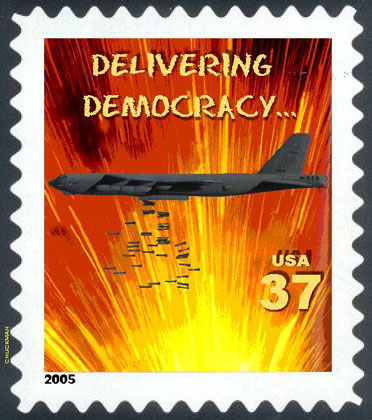 The new face of the US for the new century: Neocons against the world.

With any new political phenomenon, there is always a tendency to underestimate its novelty and treat it as some kind of short-term aberration. I vividly recall how long it took commentators and analysts, on the right and left, to recognise that Thatcherism [like Hitlerism] was something quite new and here to stay. Similar doubts greeted the Bush administration and the neocon revolution: its novelty would be short-lived, it would not last and it was just not viable. It is always hard to imagine a new kind of world, easier to think of the future as an extension of the past, and difficult to comprehend a paradigm shift and grasp a new kind of logic.

There was speculation last autumn that the second Bush term would be different, that the breach with Europe would be healed as a matter of necessity, that the US could not afford another Iraq, that somehow the new position was unsustainable. Already, however, from last November's presidential election it was clear that the neocon revolution had wide popular support and serious electoral roots, that it was establishing a new kind of domestic political hegemony. In fact, the right has been setting the political agenda in the US for at least 30 years and that is now true with a vengeance. All the indications suggest that the revolution is continuing apace.

The appointment of John Bolton as the US ambassador to the United Nations and the nomination of Paul Wolfowitz as president of the World Bank reveal a determination to place the cadres of the neocon revolution in key positions of power and influence and thereby create the conditions for its continuation and expansion. This was heralded almost immediately after the presidential election with the decision to replace Colin Powell, a man of very different political hue, with Condoleezza Rice as secretary of state.

During the first Bush administration, and especially in its conduct of the Iraq war, the neocon revolution was often characterised as unilateralist, but this was always somewhat simplistic. No nation can simply go it alone, certainly not one that seeks to dominate the world. However strong it may be, it is still required to pursue its power and ambitions through a system of alliances. The end of the cold war led to the realisation that the US was now the world's sole superpower. The period following 9/11 persuaded the Americans that they now had an opportunity to remake the world of the cold war, notably that with Europe, were no longer appropriate, certainly not on the old terms.

The US has similarly renounced, or chosen to ignore, many of the international treaties that it had previously been party to - Kyoto, the international criminal court, even the Geneva conventions - either because it no longer believed in them or because it regarded them as a threat to the exercise of a new kind of American power. But it would be more accurate to see this unilateralism as a phase rather than a permanent new condition, as a means of breaking the old order rather than a long-term strategy for the new.

The Bush administration has displayed a differential calculus. The heart of its strategy has been concerned with the Middle East where it has deployed a unilateralist policy of pre-emptive strikes and regime change as part of a wider attempt to remake the region. The Europeans were disregarded and relegated to the role of bystanders. In East Asia, the Americans have behaved quite differently. North Korea, like Iraq and Iran, was part of the axis of evil, but there has been no attempt at regime change. North Korea's nuclear weapons, the geographical proximity of Seoul, the opposition of South Korea towards precipitous action, and the role and interest of China, have obliged the Americans to move with caution. Far from unilateralism, they have vested their efforts in the six-party talks, and the hope that China might act as a restraining force on Pyongyang.

In the longer run, China remains the greatest global challenge to the US. But here again the Americans have moved with care and restraint. They sought to enlist China in the war against terror following 9/11, and since then relations between the two have been relatively calm. Meanwhile, the Americans will continue to give tacit support to Taiwan and quietly encourage Japan's growing nationalism as a bulwark against China and a means of protecting their own role in the region.

It is clear, in this context, that there are three main elements to American unilateralism: Iraq and the Middle East; the Atlantic alliance; and the US's attitude towards international treaties and law. Although the Americans flagrantly ignored the Europeans over Iraq, and have loosened the bonds that previously existed in a way that undermines the notion of the west as shaped in the crucible of the cold war, they will seek to build a new relationship with Europe, albeit one far less intimate and far more unequal than before. As for Europe, there would appear to be clear limits as to how far it is prepared to go to resist the Americans.

There are two small defining moments in this process. The Europeans may feel decidedly uneasy about Wolfowitz becoming president of the World Bank--with the exception, of course, of Bush's European lapdog, our prime minister--but they are evidently going to acquiesce. American and European dominance of the institutions of the international economy ensures that the two will continue to cooperate, even if the relationship is likely to be more tense and fractious.

The other example is the European Union's attitude towards the arms embargo with China. Under American pressure, the likely decision to lift it will now be postponed: the ties are still sufficiently strong for Europe not to wish to anger the Americans beyond a certain point. The prospects of a drift towards any form of triangulation in the relationship between the US, Europe and China, even at the edges, are still very distant.

The withdrawal of the US from international treaties does not condemn international law to the dustbin of history. It is evident, however, that the Americans are determined either to render these treaties redundant simply by ignoring them, force them to be renegotiated or perhaps both. In effect, what the Americans are intent on doing is reordering the world system to take account of their newly defined power and interests. Every part of the world is likely to feel the consequences of this geo-political earthquake, but some much more than others.

The restless determination of the Bush administration to reorder global affairs is well-illustrated by a classified document prepared by the US defence secretary Donald Rumsfeld as a prelude to a massive review of Pentagon spending. It requires the military to build a far more proactive force focused on changing the world rather than responding to specific conflicts such as the Korean peninsula. It sees the development of very differently trained troops who would be able to intervene on a much more widespread basis. "The idea is that you would have lots of teams operating in lots of places throughout the world," a senior defence official was reported as saying. At the same time, there is an absolute belief that the US must maintain such a large lead in crucial technologies that growing powers - in other words, China - will decide that it is simply too expensive to try to compete. Welcome to the new world order as seen from Washington.