Report and photos by Swami Jaidev Bharati and Ma Devi from India: 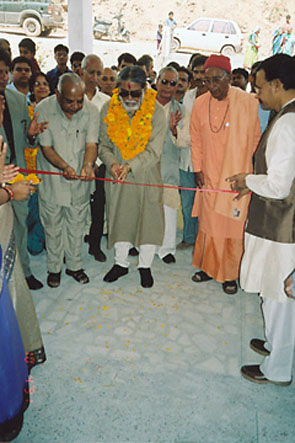 U.P. Singh cut the ribbon in the new college as Swami Hari, Dr. Mittal, and Dr. Upadhyay look on.

The cardboard sign was waving frantically as we walked past the inspection guards at Indira Gandhi International Airport in New Delhi. A tall, slender Indian with a broad grin was flashing the printed words "Swami Jaidev and Ma Devi" back and forth to catch our sleepy attention.

He introduced himself as Pradeep, whom we found to be chauffeur extraordinaire, and whisked us off to a small apartment where we managed to rest for four hours. Promptly at 5:00 AM we rose, ate a piece of toast and a quick cup of tea and headed north to the new state of Uttarranchal.

After six hours through heavy truck traffic and winding, roller coaster hills we stepped out of the auto into warmer temperatures, about a 30 degree increase from the Twin Cities. There facing us was the man himself with his irrepressible smile&emdashSwami Hariharananda, the Laughing Swami! 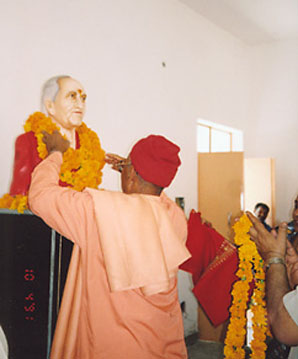 Swami Hari garlands the bust of Swami Rama inside the main hall.

Here we were at the Guest House of Malethi, the great project inspired by Gurudev Swami Rama for the mountain people of the Garhwal Himalayas. We met the staff and faculty, the supporters and workers, those faithful men and women who gathered with Swami Hari over many months to compose this unbelievable enterprise. We were especially keen to notice the dynamism of the group, their friendly interplay, their expectations for the immediate future as well as the practical, everyday running of this mammoth place&emdashSRIVERM&emdashthe Swami Rama Institute of Vocational Education and Research.

And the people came&emdashabout 2000 of them, from Dehradun, Rishikesh, New Delhi, Kampur, and all the mountain cities and villages. By car and bus and foot, some walking twenty miles to attend the grand inauguration on the bright, sunny day of April 13. 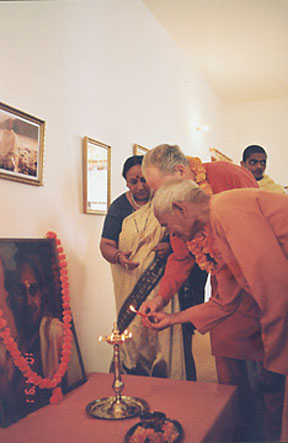 Swami Ananda and Swami Jaidev light the lamp in the meditation room as Mrs. Upadhyay assists.

Up at the main entryway, U.P.Singh, retired Chief Financial Minister of the Government of India, cut the ribbon to open the new vocational college to one and all. Swami Hari garlanded the statue of Gurudev, while Swami Ananda and Swami Jaidev lit the flame before the master in the beautiful meditation room above. We all inspected the school herbal section established by Dr. Vinod and Mrs. Kusum Upadhyay where students will learn the cultivation and processing of herbal plants into ayurvedic remedies. We saw the computer room filled with up to date equipment for universal communication. We learned about the woodworking, cooking, catering, food processing, medical lab technology, and hotel management programs being set up. It was a joy to see all the work completed and the wonderful future plans.

The group next went to the huge tent set up on the spacious sports fields and were inspired as the administration was thanked and praised, garlanded with flowers, and showered with gifts. Each major contributor, from college professor to business officer to medical personnel, both men and women, joined that day to launch a Himalayan first. 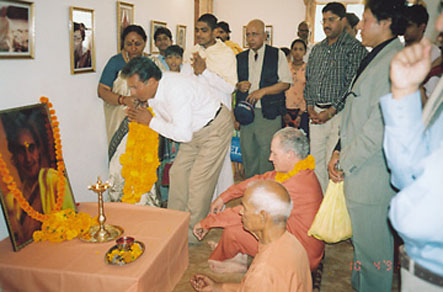 Some time earlier, Devi had come up with a secret surprise to help with the construction bills. We compiled and edited Swami Hari's lectures given in the West and Yes International published them, together with photos of the saint, in a little book titled The Laughing Swami. The books were now presented to Swami Hari and given to each of the faculty and administrators.

When Swami Jaidev was asked to talk, he spoke of his refreshed surprise of all before him. He said he could not help but recognize that here in the vast hills of Malethi all these efforts actually built a new 'Field of Dreams' for the Indian people.

We continued the celebration into the early evening with food and dance, laughter and warm greetings. No doubt the Gods of the Kumbha Melas were envious! Swami Rama's forest monk outdid himself. And why not? 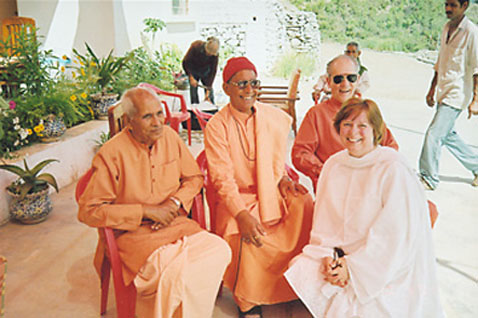