Constantin-Film 'The Downfall' was nominated for the Oscar 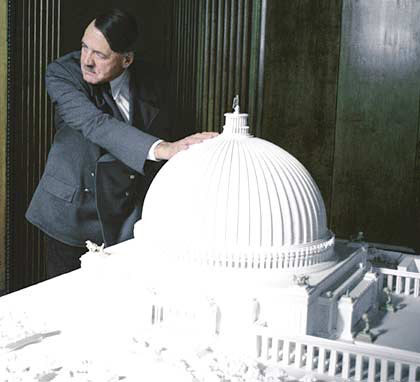 Hitler with a model of the Great Hall, as played in the film by Bruno Heinz. This project, designed by architect Albert Speer, was to be the highest building for the Reichshauptstadt Berlin. The famous sculptor Arno Breker was commissioned to create the lions on top of the building, as well the sculptures and reliefs for the architecture in the Governmental District in Berlin.

Los Angeles (bpb) Adolf Hitler, the German Fuehrer and dictator in the 20th century, came in the person of the movie star Bruno Ganz (Switzerland) to Hollywood. The reason was: the film saga 'Der Untergang' ('The Downfall') was nominated by the Academy Award Nomination Committee for the Oscar in the category Best Foreign Language Film.

But at the end, the German author and producer Bernd Eichinger and his Constantin-Film München did not win. The final announcement was: the winner is "Mar adentro". The jury preferred the suicide theme movie of the Spaniard Alejandro Amenábar.

Still, for Germany it was an honor to be nominated for an Oscar. The extraordinary film The Downfall tells the story of the last days of Adolf Hitler and his followers in the Reichskanzlei (New Chancellery). Film director Hirschbiegel pointed out that this was the first movie about Hitler ever made and financed totally by Germans. Bernd Eichinger's goal was to make a movie "as authentic as possible".

Eichinger was very careful in selecting the costumes, the designs and the right architecture for the film. He has even reconstructed the main entrance of the Reichskanzlei (which was destroyed by US bombs) with the two popular bronze sculptures "Die Partei" (The Party) and "Die Wehrmacht" (The Army) by the sculptor Arno Breker (Copyright www.museum-arno-breker.org).

This was the right background for the historical scene in which Albert Speer, Hitler's architect and minister for armaments and defence, said the final good-bye to his Fuehrer. 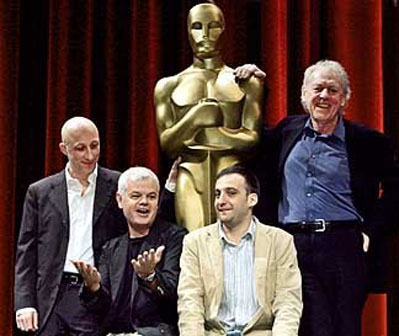 The German film director Oliver Hirschbiegel (left) with his foreign colleagues Darell Roodt, Alejandro Amenabar and Kay Pollak in front of a monumental sculpture of the OSCAR.

From the very beginning, the movie The Downfall was a financial success in Germany and in all other countries where is has been shown. A movie theatre in New York City received just during the first weekend about $ 30,000 in ticket sales. Most of the visitors said in exit interviews that it was worthwhile to see this fascinating film.

In spite of all the praise for the producer, actors and film directors, the Hitler movie has several parts which are not authentic. "It is not true that Hitler gave personally poison pills to his followers and faithful supporters until the last days in order to end their lives", said Otto Günsche. He was the last personal adjutant of Adolf Hitler. It was also Günsche who was in charge to burn the corpse, after Hitler committed suicide.

Producer Eichinger made another mistake in greatly overstating the importance of Hitler's youngest secretary Traudl Junge. She was not as important to Hitler as his close personal secretary Frau Gerda Christian. This young lady, with the maiden name Daranowski, was called Dara by Hitler in order to avoid using her Polish-sounding last name in the Chancellery.

60 years after the end of the Nazi empire, Adolf Hitler is still of great interest to the general public in many European countries, Asia and in the United States. He is seen as being responsible for the Holocaust and for the cruelties toward the Jewish people. The other dictators of this time, all of whom have blood on their hands, seem to be forgotten: Josef Stalin from the communist Soviet Union and Hitler's political friends Benito Mussolini (Italy) and General Franco, the late Fascist leader of Spain. This is our request to historians: the crimes of these dictators against human rights should never be forgotten.