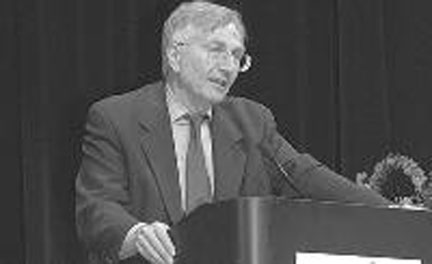 Seymour Hersh confirmed existing worries about Bush's next four years in office during a Tuesday night lecture in the Memorial Chapel of the Wesleyan College.

Hersh forecasted a protracted war in Iraq, an obstinate president who will remain indifferent to anti-war sentiments, and an economic collapse. In his talk "Chain of Command: From 9/11 to Abu Ghraib," Hersh criticized both Republicans and Democrats, stressing the need for new faces in Congress.

Hersh is one of America's most renowned investigative journalists, currently writing for The New Yorker on military and security matters. In 2004, Hersh helped expose the Abu Ghraib abuses.

Hersh began his lecture by describing Bush's vision of the war in Iraq and the effects his beliefs will have for the future of US intervention.

"Bush thinks he's doing the right thing in Iraq," Hersh said. "He's completely committed whether it's finishing his father's work, for divine reasons, or manifest destiny. Over 1,500 body bags have come back and another 1,000 or 2,000 body bags wouldn't stop him."

The justification for the U.S. invasion, he said, is not oil or Israel as many have thought; it is Bush's uncompromising beliefs.

"It's really terrifying," Hersh said. "Street marches and demonstrations wouldn't change what he's going to do. Even when Bush was asked by a high ranking government official if the US was losing the war in Iraq, Bush said 'you mean we're not winning?'"

"None of us know what motivates Bush," Crenshaw said. "There are some, Professor Gergen [at the Kennedy School of Government] at Harvard [who] see Bush as a good leader, someone who is flexible and pragmatic. You get a different picture of the president from different things you read."

According to Hersh, Bush's vision has presented several negative implications for the ear in Iraq. Bush has kept the American people in the dark about what is actually going on. There are no embedded journalists and few reporters in Iraq, which allow military activity to go unchecked.

The administration's use of the word "insurgents" in Iraq gives the wrong impression of militants, making them seem unorganized and barbaric. They in fact should be called "resisters," because they are simply resisting the US occupation.

These resisters are more methodical than Bush or the media have given them credit for.

"[The resisters] are letting the Americans have Baghdad," Hersh said. "Most of the Iraqis left the city before the U.S. invaded. And the attacks that occurred during that time seemed random to us. They were taking down their existing structures systematically."

According to Hersh, the insurgent violence, along with an upcoming presidential election, created the impetus for Abu Ghraib. Bush wanted to gain the most information he could in the shortest amount of time.

"While Americans value privacy, Arabs work on shame," Hersh said. "Men cannot see men naked, it's against the Koran. The photos that were taken could be used as blackmail against these prisoners.

The President and his administration knew what was going on, according to Hersh; they had inspected Abu Ghraib and praised its work.

According to Hersh, the American troops in Abu Ghraib were deeply affected by the torture they inflicted. He compared their actions to those of the US soldiers involved in the My Lai massacre in Vietnam, which he exposed in 1969.

"I gave them a good boy," Hersh quoted one mother of a soldier involved in the My Lai massacre. "And they gave me back a murderer."

Abu Ghraib is just one example of covert military behavior, Hersh said, but it goes deeper. In recent months, the military has even been hiding where U.S. troops are located. Most troops are being killed in Romady, not Baghdad.

The new plan of attack is to take over one city at a time with the goal of making Iraqis more afraid of U.S. troops than insurgents. The military believes that this is the best way to make Iraqi's safe. The marines, however, do not have the intelligence to make this mission successful and eventually, Hersh said, it will result in a civil war.

On the subject of Afghanistan, Hersh claimed that the violence was completely unnecessary.

"More than 70% of the Taliban didn't want bin Laden as a leader," Hersh said. "Meanwhile, we have declared victory when warlords control the military bases and a mafia society is in control."

Hersh's most recent articles in January 2005 revealed that the U.S. has been conducting covert operations in Iran to identify targets for possible strikes. While both the Bush administration and the Iranian government have denied these allegations, Hersh claims that the U.S. will not stand for Iran having nuclear power.

"We'll do something in Iran," Hersh said. "The Bush administration has long been planning it. This is the worst presidency and the worst war at the worst time in history that I can see. The Congress does not stand up to Bush. Their problem is that they're down 20 IQ points a man since the 1960's."

While his lecture gave a pessimistic view of the next four years, he did offer hope for the upcoming Congressional elections. In the last election, he noted an emerging pattern in the West, which he called community building. Our government needs new leadership, he said. The people need to support better politicians and than work to get these people elected.

Most students trusted Hersh's credibility but questioned his extreme negativity of the current political situation.

"It seems like he's well connected with very powerful people," said Josh Cohen '05. "He's credible--fame allows people to confide in him and so he becomes a great source of information."

"If anything good can come out of all of this mess, maybe it will be that people will develop a more critical perspective about those in power, and military recruiting will suffer," said Mark Bray '05.

Professor Philip Pomper of the History Department has been friends with Hersh since elementary school and invited him to speak at Wesleyan.

"You never can guess when you're playing softball with someone on the south side of Chicago, what they are destined to become," Pomper said. "But when you can balance advocacy with actuary, you can make a compelling case. And that's just the kind of man he is. A man of conviction."