Pope Benedict XVI and the 'Two Comrades' by Arno Breker

Bronze relief is the Art Work of the month 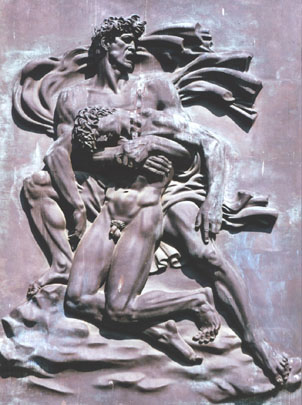 The new Pope Benedict XVI was only 14 years old, when the sculptor Arno Breker created this monumental relief of two friends. It is a work in the style of a Pieta (Holy Mary holds Jesus Christ). The Europaen Art Foundation has now recommended this masterpiece to be placed in the Vatican City, in order to continue the tradition of classical art, manifested by works or Michelangelo and Leonardo da Vinci.

Rome / Berlin (bpb) The Europaen Art Foundation EKS has declared the bronze relief 'The Comrades' by Arno Breker as the Art Work of the month in May, 2005. This month is especially dedicated by the Catholic Church to the Virgin Mary, the mother of Jesus Christ. 'This works symbolises the intentions and ideals of the new Pope: Fraternity, Help and Peace', said a spokesman of the Foundation.

The relief shows two men in a classical pose: The elder helps the younger, wounded man. Breker created this work in the style of the traditional motives of a Pieta: The Holy Mary holds Jesus Christ in her arms after the crucifixion. The only difference is that not a mother, but a friend--a comrade--is holding the helpless one.

No doubt this masterwork reminds us about the great wars of the 20th century, and the cruelties of these wars. Arno Breker, born 1900, had experienced both the World War I and World War II. He started to create this relief in 1941 in Berlin. In those days, Josef Ratzinger was an unknown boy of 14 years of age in Bavaria.

The COMRADES is an unique and authentic art-work of an ending epoch. It is an appeal to us all to learn from history, and to become personally engaged in the efforts for a better future of mankind. The Foundation suggested placing the relief in the Vatican City, either on a public place or in the Vatican Gardens. This way, the art-preserving papacy could continue the tradition of the classical art, manifested by the works of Michelangelo and Leonardo da Vinci. The relief has been preserved for decades in a museum. The first sponsors showed interest to donate this art work to the Vatican. 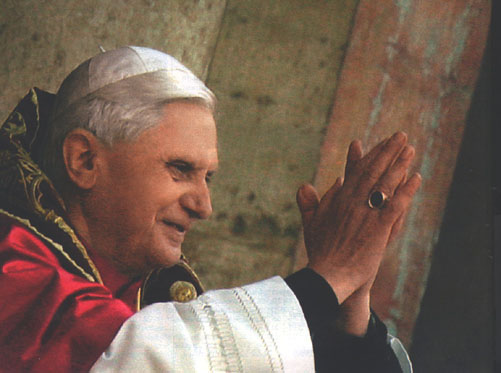 Pope Benedict XVI. In the 'Empire' of the Holy See, the sun is always shining. The German Joseph Ratzinger has now to take care of the Catholics on all the continents. He wants the dialog with all religions. Pope John Paul II has met many times H.H. the Dalai Lama of Tibet. The Buddhist leader continues to live in exile in India. This photograph shows the Cardinal Joseph Ratzinger. He was elected as Supreme Pontiff, the 264th successor of Peter, and has chosen the name Benedict XVI.