Dante and the Lustful 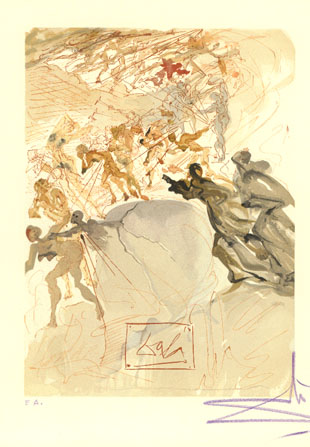 (25) It is 2:00 pm, as the three poets begin their ascent to the Seventh Circle. Dante is eager to find out how the Gluttons could give the appearance of advanced starvation despite the fact that they are just airy bodies, and do not need any food. And so Virgil encourages Statius to explain this mystery. By the time Statius finishes his explanation, the poets arrive at the Seventh Circle. They find there the souls of the Lustful, enveloped in sheets of flames. 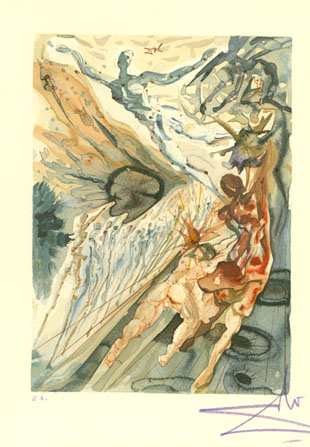 (26) Dante's shadow falls on the wall of flames, and it is noticed by the souls of the Lustful, who question him. But his explanation is interrupted by a second group of souls coming from the opposite direction: they are the Sodomites. 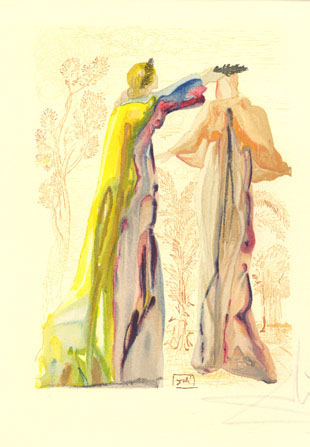 (27) A little before sunset of the third day in Purgatorio, the poets come to the further limit of the Seventh Circle and are greeted by the Angel of Chastity, who tells them that they must pass through the wall of fire. Dante recoils in terror, but Virgil persuades him to enter in Beatrice's name.

They are guided through the fire by a chant, which they hear coming from the other side. Emerging from the flames, they see that it is sung by the Guardian Angel of the Earthly Paradise, who is standing in a brilliant light.

The angel hurries them on toward the ascent, but night overtakes them. The poets lie down to sleep on the steps. And there, just before dawn, Dante has a prophetic dream. As the day arrives, the poets rise and race up the rest of the ascent, until they come in sight of the Earthly Paradise. Here, Virgil speaks his last words, since the poets have now come to the limit of Reason. Dante is now free to follow his every impulse, since all motion of sin in him has been purged away. 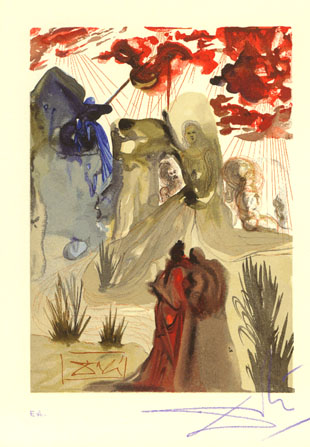 (28) It is the morning of the Wednesday after Easter. Having been crowned Lord of Himself by Virgil, Dante now takes the lead for the first time, wandering at his leasure into the Divine Forest of the Earthly Paradise. Then, his way is blocked by the river Lethe.

His feet stop, and his eyes suddenly see a solitary lady singing and gathering flowers. She is Matilda, who symbolizes the active life of the soul.

In reply to Dante's request, Matilda approaches to the other bank of the river. Standing only three steps away from him, she offers to answer all of Dante's questions. Dante replies that he is in some confusion about the sources of the wind and the water of the Earthly Paradise. Matilda proceeds to explain in great detail the natural phenomena of the Earthly Paradise--that is, the source of the wind, the vegetation, and the water. She also explains the special powers of the water of the river Lethe.