Dante's passage through the Needle's Eye 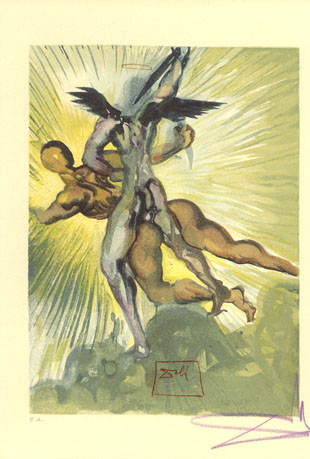 'THE VALLEY OF GUARDIAN ANGELS', woodcut # 42 by Salvador Dalí. After the encounter in the Valley of Flowers, the two Angels with fiery swords to guard the valley. The composition of the picture reminds of a heraldic image. From the animal kingdom, which is represented in the text by the description of a snake, the artist made an allegory of the demonic using a human-like figure instead.

(7) The spirit of Sordello offers to take the Poets as far as Peter's Gate. Since it is nearly sunset, Sordello explains that by the law of ascent no one may go upward after sundown. He suggests that they spend the night in the nearby Valley of Flowers, in which the souls of negligent rules wait to begin their purification. The three climb in the failing light to the edge of the valley.

(8) As the light fades, Dante, Virgil and Sordello stand on the bank and watch the souls below gather and sing a hymn asking for protection in the night. In response, two Green Angels descend from Heaven and take up their posts, one on each side of the valley. Full darkness now settles, and the Poets may make their descent into the valley. Dante soon finds a soul he knows, and has a long conversation with him. Afterwards, when Dante is talking with Virgil, the Serpent appears and is immediated chased away by the Angels. 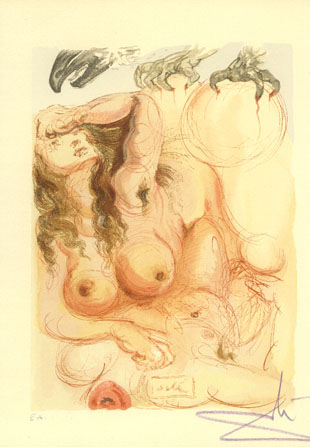 'THE DREAM', woodcut # 43 by Salvador Dalí. A voluptuous female figure, which reminds of a painting by Rubens, attracts the viewer's attention. To the dream image Dali adds an Eagle descending from Heaven, and a headless female body below.

(9) Dawn is approaching. Dante has a dream of a Golden Eagle that descends from Heaven and carries him up to the Sphere of Fire. He wakes up and finds that he has been transported in his sleep. It was Lucia who bore him, laying him down beside an enormous wall, through an opening in which he and Virgil may approach the Gate of Purgatory. Virgil leads Dante to the Gate and its Angel Guardian. The Angel is seated on the topmost of three steps that symbolize the three parts of a perfect confession. Dante prostrates himself at the feet of the Angel, who cuts seven P's in Dante's forehead with the point of a blazing sword. He then allows the Poets to enter.

(10) The gate closes behind them and the Poets begin the ascent to the First Cornice through a difficult passage that Dante describes as a Needle's Eye. They reach the cornice about 10 o'clock on Monday morning. Dante sees a series of three marvelously wrought bas-reliefs in marble of the inner cliff face. Three panels depict three scenes that serve as the Whip of Pride. As Dante stands in admiration of the carvings, Virgil calls his attention to a band of souls approaching from the left. They are the souls of the Proud, who crawl agonizingly round and round the Cornice under the crushing weight of enormous slabs of rock. Their punishment is so simple and so terrible that Dante can scarcely bear to describe it.

(11) As the souls of the Proud creep near, the Poets hear them recite a long and humble prayer. Then Virgil asks one of the souls--hidden from view under its enormous burden-- the way to the ascent. The sinner instructs the Poets to follow along in the direction the souls are crawling. His sin was the Pride of Birth. Another soul's sin was the Pride of Talent, the avidity of an artist for pre-eminence. And another's sin was Pride of Temporal Power, although it was alleviated a bit by the soul's single Act of Great Humility performed in order to save the life of a friend. 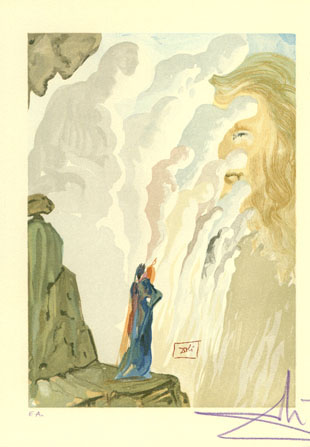 'THE BEAUTY OF SCULPTURES', woodcut # 46 by Salvador Dalí. As the Poets continue their journey, they come upon a group of sculptures, which come from Biblical events and from Antiquity. Dante thinks of the sculptures as being on the ground, but Dalí depicts them in a dimension of space, in a cloud-like consistency.

(12) Virgil instructs Dante to arise from where he has been walking and to move on. Dante follows, and soon Virgil points out to him the Rein of Pride carved in thirteen scenes into the stone beneath their feet. The scenes portray dreadful examples of the destruction that follows upon great pride. The Poets move on, and find the Angel of Humility approaching to welcome them. The Angel strikes Dante's forehead with his wings, and the first P instantly disappears, symbolizing the purification from the sin of Pride. The Poets pass on, up a narrow Ascent to the Second Cornice. As they climb up, they hear the singing of the Angel of Humility.