The Sculpture Garden of Alexander the Great

It will be 2,364th birthday anniversary of Alexander the Great.

The Town of Clarence will celebrate its 200th anniversary. 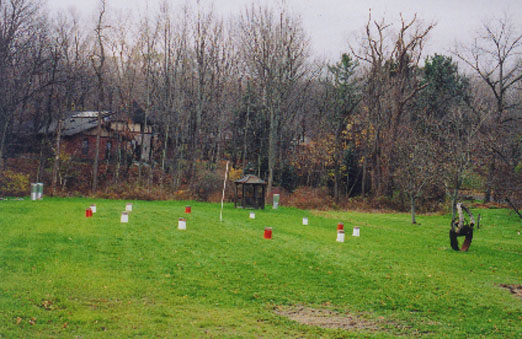 View on the Alexander Garden in autumn 2005. Photo shows the approximate locations of the first 15 sculptures to be installed by the inaguration on July 20, 2008.

The ALEXANDER GARDEN is located at 10545 Main Street in Clarence, New York. With the Museum of European Art, it will form a 21,300 square feet complex. The Museum is strategically located in the historical heart of Clarence. Its immediate neighbors are: the 'Romantic Inn' Asa Ransom House, the Clarence Historical Museum and the Clarence Town Park.

Initially, 15 bronze sculptures and portraits of world-known personalities will be installed, all created by prominent European and American artists. Further unique and interesting works of art will continue to be added annually.

Phase I of the development of the Alexander Garden was completed in 2005. The usable area for the display of sculptures was effectively doubled by extensive landscaping, and a gazebo was installed in the garden.

Wrought iron gate (15 feet wide) will be erected as the main entrance.

Security fence (over 600 feet) will be installed.

Additional landscaping will be addressed and designed.

Locations for the 15 sculptures will be selected.

Foundations and pedestals for the 15 sculptures will be built.

Additional landscaping will be carried out.

3 sculptures will be installed.

12 sculptures and portraits will be installed.

Remaining landscaping will be completed.

Inauguration will take place on July 20, 2008. By invitation only.

Inauguration of the Alexander Garden will take place in the presence of invited guests, members of the Order of Alexander the Great, public personalities and artist-friends from Europe, Canada, United States and other countries.

Alexander Dinner (for the members and dignitaries of the Alexander Order) will take place in the evening of July 20, 2008.

For invitations to the Inauguration and the Alexander Dinner, and for information how to support the Alexander Garden project financially, please contact the director, Consul B. John Zavrel at zavrel@meaus.com