St. Petersburg/New York (mea) To appreciate properly a painting by Oleg Korolev, it is necessary to understand that it manifests itself in several spheres simultaneously.

On the one hand, it is possible to consider it as an organic part of the Russian art itself. This way on the foreground comes that circumstance, that the most significant pieces by Oleg Korolev were created in a genre of the "Religious Art".

This genre has had appeared in the Russian painting in the middle or XIX century. Alexander Ivanov and Nicolay Gay have become it's founders on the Russian soil. Michael Nesterov and Nicolay Roerich appealed to the matter in the beginning of XX of century as well.

A Religious picture differs both from the painting on the secular themes, and from the icon itself. A "watershed" with the last one lies in the field of function: a "Religious painting" does not participate in the religious service, in the meantime for an icon this a basic assignment. Thus a religious picture, the same way as an icon, belongs to the sphere of the sacred, as we all know, it represents the characters of the sacred history (Christ, apostles, holy men), it's events (The Bible plots, the Eschatology ) or a mystical part of the human life.

A religious plot can be considered as a non-sacred only in case of it's interpretation denies the holiness itself, or brings it down up to the commonness (as it happens with a caricature, for example). A sacredness of the depicted in the religious picture should be recognizable ( and/or ) to be is designated in the context of the certain creed, that distinguishes it from the painting on some general mystical themes.

In the art life a religious picture is called to serve as a transferring part between a studio of the artist and the walls of a temple: the most successfully developed Christian plots, tasted on the canvases and exhibitions, were transferred to the church interiors, to icons. In the Soviet period the religious picture, by the obvious reasons, has established itself as a completely all-sufficient genre(1). In 1950-1990th Evgeny Spassky, Vitaly (Stephan) Linitsky, Alexander Kharitonov, Vladislav Provotorov successfully worked in the genre.

On the other hand, the paintings of Oleg Korolev belong to the generated in XX century, Visionary art movement. Visionary art - not a style, but rather a method, more reminding an individual psycho-spiritual practice, than art in it's cultural-aesthetic sense. In the West, the art of visionary, formally coming from the Catholic painting of Hieronymus Bosch, Grunevald, El Greco, mystical art of William Blake and European school of Symbolism, being transformed through Surrealism, has signified a cardinal reconsideration of the attitude to sphere of the spiritual.

Though, by the highest standarts, the given approach is not so new. A visionary with a necessity appears in those areas of art, where a task of the direct visualization of the spiritual experience is established. Thus some allegoric, hieroglyphic approaches and other similar methods are excluded, or they do gain a subordinated rank. The roots of the art visionary go to the Paleolithic murals of the Lascaux and La Madlen grottos (Altamira cave ). The totemic vision of the hunters of Paleolith, gave a birth to the ageless patterns of the high Animalism and underlie a method, attributed later to Realism. There is no doubt, that Orthodox Icon painting and Vajrayana Thangka painting of are methodically close to the Visionary art, where an artist-pupil reproduces the patterns of the approved spiritual experience, and the artist-teacher creates art pieces, which become the samples. The proclamation of the art Visionarism as a separate direction in the Fine Art, becomes a sort of a peculiar "revenge", which gains the Sacred from the Secular civilization of the West.

In the middle and end of 1940s in the different countries to the arena of the art life comes the whole pleiad of the artists: Ernst Fuchs, Moris Esher, Johfraâ¤| Later the world recognition have got Carlos Paes Vilaro, H.R.Giger and many others. Defining itself in the conditions of delimitation with the non-figurative kinds of painting, visionary art testifies, that the creativity is not determined so much by the social context or the aesthetic definitions, but mostly by evolution of the person, by the new opportunities of the communications, which overcomes the national borders and the confessional areas of the influence. Modern Visionary painters, using the classical approach of art techniques, as a rule, aspire to the personal technical perfection, that which so sharply contrasts with the moods reigning in Contemporary Art (2).

To the Visionary art pioneers of the Imperial Russia it is possible to ascribe a Lithuanian artist Mikalojus Ciurlionis. Therefore, it is twice interesting, that the childhood of Oleg Korolev has passed in Vilnius, where he could contemplate the same kind of the views of Lithuania with it's iridescent atmospheric suspension, as before it did Ciurlionis. Though, as confesses the artist, in that times he had much bigger interest to the canvases of the Renaissance masters, as well as Baroque and Realism artists of XIX of century. Later Korolev has got familiar with the art by Nikolay Klamakoff and Pavel Tchelitchew, - other greatest Visionary artists.

In the nowadays Oleg Korolev, perhaps, is the most consecutive successor of the ideas of the nationally oriented Russian Modern, refracted through the experience of Visionary art, one of the best masters, working in a genre of a Religious picture. To the painting of Korolev is inherent a high symbolical "resolution", a virtuosity of a harmonization of the uncountable details, which is not leaving even a slightest "seam" in the visual and conceptual perception.

A Contemplative art of Oleg Korolev translates the basic ideas of the Orthodox asceticism to language of painting. Though, many pictures of the artist have a complex theological underlying reason, they are quite accessible even to a perception of the external to the religious context, spectator.

Thus, a message of the painting " Peresvet, Oslyabya, Divine Gloom " (2006) comes from the Apophatic theology of Dionysius Areopagite. In the common philosophical plan, Divine Gloom it is a way to mark the Divine Being through a denying of all that which is not true. At the same time, the Divine Gloom expresses the moment of the entrance into the Ultimate Reality. In comparison with it any image and name, including an image of the holy man or a national hero, is only a product of a mental speculation, conditional and limiting.

A pathos of works by Korolev is in the overcoming of the duality of the perceived and perceiving. In this plan his art creativity puts the same task, as the practice of the "Mental ascesis" of the Orthodox monks - Hesychasts . However, it reaches not by a refusal from the technical arsenal, but, on the contrary, through a usage of all it's riches, developed by the all previous generations of the painters of Europe. Maximally sating the spectator perception, Korolev creates certain conditions for the opening of the "eyes of the mental vision", when as a subject of contemplation becomes not a distinction of the things, but their internal unity. A definitely Internal, as it is seized itself after a focusing of the attention on the exclusive property of every thing, which makes it to be itself. Having concentrated on the original quality of some subject, the spectator, unexpectedly gets into the layer of the eternity perception, receiving the internal proof of own affinity with the things depicted on a canvas.

It is a difficult method, which takes a lot of physical forces and requires a great skill. Johfra, Mati Klarwein, Roberto Venosa are recognized coryphaeuses of it in the Visionary art. Oleg Korolev is one of the few Russian artists, which managed to achieve here a virtuosity, not having broken off the connecting "navel-string" with the icon tradition of Orthodoxy. As we remember, a main argument for the acceptance of the exactly Eastern-Christian rite as a state faith in Xth age, has served an exactly aesthetic factor. The great prince Vladimir ambassadors being in the church service in Constantinople were struck with the unearthly beauty, discovered by them in the Byzantine liturgy. Their aesthetic perception organs have received the richest food. This annalistic story reflects one of the leading vectors in the Russian religiosity patterns.

One of the latest accomplished works--the large canvas "Michael" (2009), belongs to the Eschatological sphere, a teaching about the final destinies of the world. The picture shows one of the key moments in the pre-human cycle of Creation: a fall of the Lucifer and a victory gained above him by the Archstrateg Michael. Not casually the overthrown Satan and his demons are non-personified, as it is accepted historically in the Christian iconography. We are watching only the Angelic Host of the Archangel Michael, slashing the darkness by the lightnings weapon. However, the images of the angels (which are decided in the Neo-Hellenistic manner) obviously differ each from another by a degree of luminosity. Following after the line of the impact from the top to bottom, they, as if they are eclipsing , with an inevitability ceasing to reflect the divine light. According to aesthetics-philosophical canon, which Oleg Korolev's a painting asserts, the only an allowable way of depiction of evil is the shade on enlightened images of Angels.

(3) From the Greek word‚ which means "denying" - a theological method consistently denying all possible definitions of the God, as incommensurable.

Roman Bagdasarov from Moscow, Russia is a prominent expert on religious and visionary art. For more information, visit his website at 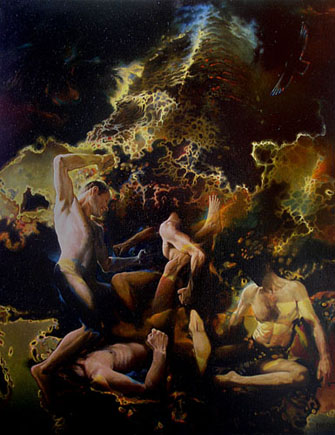 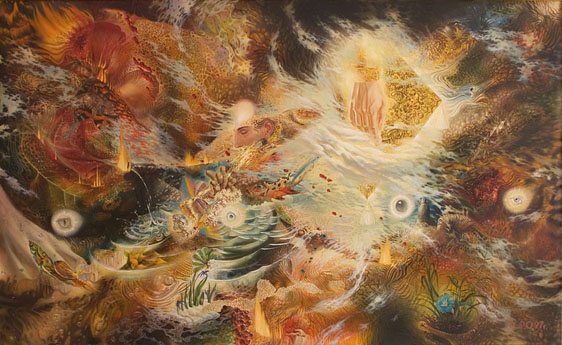 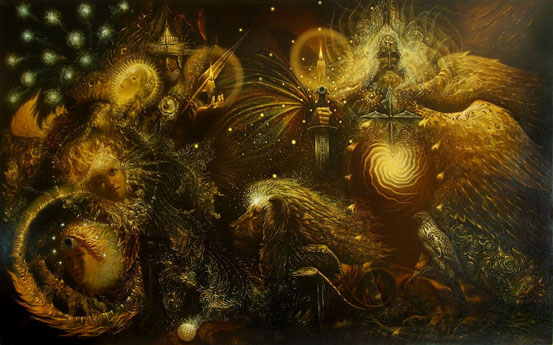 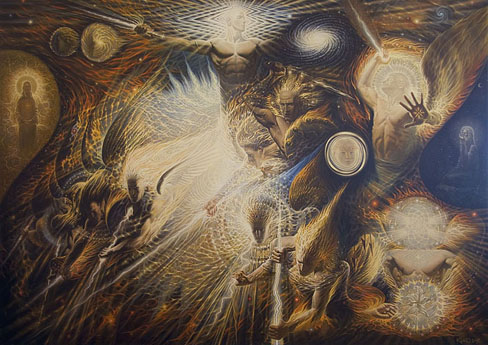 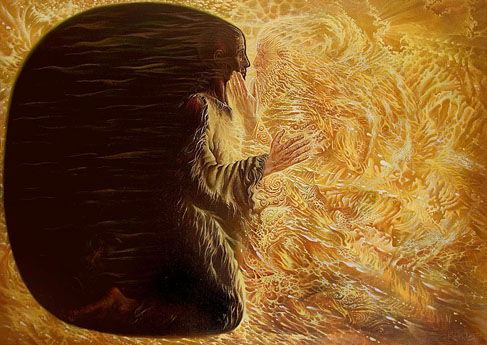 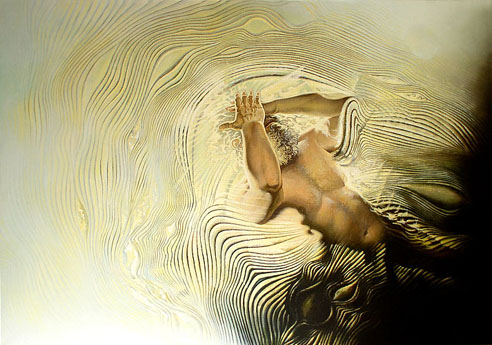 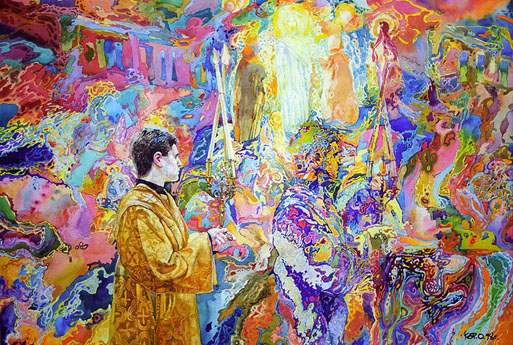 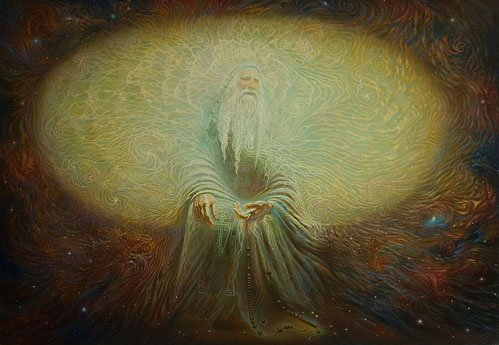 Oleg Korolev is a Russian Mystical, Religious and Visionary artist, painter. His art works have been on display in private and corporate art collections in Russia, Europe, North America and Australia.