SCULPTURE AND THE SACRAL GESTURE 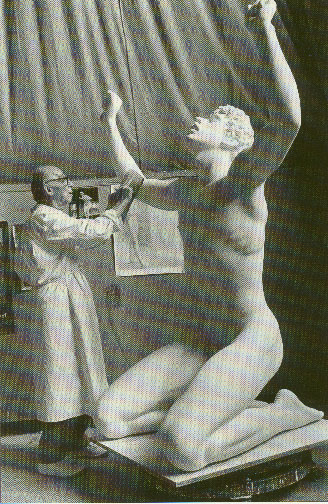 The sculptor Arno Breker working on the sculpture of the Olympic champion Jürgen Hingsen.

A few words about the sculpture DECATHLETE for which Jürgen Hingsen, the victorious decathlete, was the model.

There are moments in a human life, when expression and movement are so harmonious, that they are impressed on our minds as symbolic. It is actually the simple gestures which have a sacral effect, when they occur naturally, in the right place and at the right time.

One such happy meeting was witnessed by the millions of people who saw the conclusion of one of the many successful competitions of the athlete Jürgen Hingsen. His powerful body trembled with exhaustion and joy over his victory. Then, in a flash, came the gesture with the unforgettable effect: the athlete raised his hands toward the sky and spread out his arms in a pose of gratitude and joy.

"Hingsen was giving thanks to the gods of Olympus," many said. "It was a prayer," thought others.

I myself was fascinated by this pose. Jürgen Hingsen made it clear that sports, corporeality, and achievement form a triad in harmony with faith in the Eternal. My longing to capture this incident permanently found a positive echo in Hingsen. Thus, working with him, a larger-than-life sculpture arose. Through it I reveal that, as the twentieth century comes to a close, sports and religion have formed a new and positive relationship. The sculpture is also a tribute to the decathlon and to Hingsen himself.

It will teach future generations, who search for traces of their past, about the people of our time, about sports, and about the athletes through whose strength of will this achievement came about.

This sculpture stands at the forefront of an awareness of a new relationship between man and God. Sports and religion, sports and myth - these are well-known associates. We are familiar with pictures in which athletes kneel in order to receive their awards. With reverence and humility they bow their heads so that the laurel wreath can be placed upon it.

The sculpture of Jürgen Hingsen shows something new: he does not kneel with humility, awaiting recognition. Instead, he raises his head and does not shrink from looking upward. His powerful body is not introverted, but open and expressive.

In Hingsen's countenance, I have captured the moment immediately following his shout of victory. His eyelids closed over eyes radiant with happiness. He forgot everything around him, as he communicated with the divine. I cannot find words to elaborate further. Others must use their own sensitivity to grasp it.

I am often asked why I use athletes as models and whether this is not outmoded. My answer: That which is good never becomes obsolete. Athletes are the best models for sculpture. It is impossible for a sculptor like me, who loves the triad of beauty of the body, spirit and soul, to overlook either a male or a female athlete. Besides, I have always been interested in athletic achievement per se, as well as from an artistic viewpoint.

If the sculpture of Hingsen has a special significance in the new dialog between sports and religion, sports and art, and art and religion, then it is also representative of a new development. Hingsen's stirring behavior was certainly not premeditated. It came naturally, like a prayer from the unconscious. Nevertheless, it was and is an expression of a completed development and a new self-consciousness. The evolution of this new development and self-consciousness was similar to that of a maxim or a proverb. They were not "invented" or "imagined" in conformity with people's wishes. On the contrary. Maxims are the result of experience. They are formulated through practical use by the general public.

The sculpture of Hingsen was positively received by the public. This is true both for the initial, smaller version as well as for the large sculpture which is meant for exhibition in an open area. Not only decathletes and other athletes, but sports fans as well, can relate to this work.

Young people often ask why stadiums are not adorned with sculptures of today's athletic idols. Why shouldn't this wish be fulfilled? The desire for likenesses is as old as mankind itself. Man's love of beauty, form, and harmony is inextinguishable. My sculpture of Hingsen renews and strengthens this love.