Reminiscences in the days of the fight against terrorism 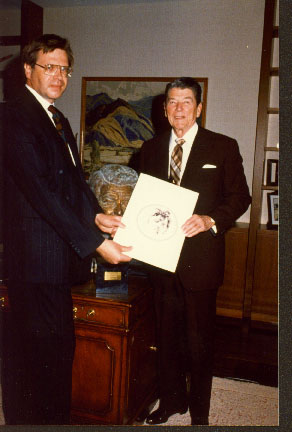 Chancellor of the Alexander Order, Consul B. John Zavrel presents President Ronald Reagan a document of the Order at a ceremony in the President's office.

New York. In these days of October and November 2001, in these days of the international fight against terrorism, it is good to remember one man, who is an American Hero: Ronald Reagan.

We recall his great epoch as the 40th President of the United States of America and his merits for global security. We remember his contribution to end the Cold War between the Western and the Eastern world--between Democracy and Communism.

And it was his wise leadership that brought about the fall of the wall in Germany. This symbol of confrontation in Berlin was at the same time a warning of the danger of atomic confrontation between USA and the communist Soviet Union. Many years later we recognise once more the value of Ronald Reagan's policy, not only what he has accomplished, but also what he has avoided. Instead of a Third World War between East and West, including the use of atom bombs and missiles, Reagan's policy brought the freedom for countries under communist domination such as Czechoslovakia. In the meantime, the independent Czech Republic and the Republic of Slovakia are trustful allies of the free world.

And his words are still in our ears. The words of the historical day of June 12th in front of the Brandenburg Gate in West-Berlin, when he asked the Soviet Leader Gorbachev to raze the Berlin Wall.

A new painting of the President for his 91st birthday

In these days of fight against terrorism, I recall my own meetings with President Ronald Reagan years ago. And suddenly I felt the urge to call his office. "The President is fine, considering the situation" I was told.

We know that Ronald Reagan said farewell in a public letter to the American people when his Alzheimer disease was discovered. This confession, supported by the First Lady Nancy Reagan, was another great true gesture of President--it never had happened before in any part of the world that a famous politician would make such a personal public statement.

On the phone I informed the President's Office of the good news that the painter Mary McAndrew is working on a portrait of the President. The portrait will be created with the help of a photograph taken in the President's office when he became a Knight of the Order Alexander the Great for Art and Science. The European Art Foundation commissioned the painting. It will be ready by the end of the year 2001. On February 6th, 2002 Ronald Reagan becomes 91 years old. The work of art is a precious birthday present of the European Art Foundation.

America--do not forget your Hero!