The Rising Star of the Maha Kumbha Mela 2001

A Tribute to Swami Veda Bharati.

Shri Swami Veda Bharati rose like a shining star into the sky of love, selfless service, joy and devotion of the Maha Kumbha Mela 2001. I was able to share with my beloved elder brother and dear spiritual teacher a lot of painful processes since the Maha-Samadhi of our Gurudev Shri Swami Rama.

I had criticized him for some of his worldly actions, but never his spiritual achievements and depths. I for myself was struggling to understand the initiation poem of Goethe &endash "The Secrets" where he says; "From the violence that binds all living beings, only that human being can free himself who conquers himself." But how to conquer oneself? Shri Swami Veda has been offering me teachings over the last four years. Blamed and humiliated by others so that I often wanted to hurt them, he never said an unfriendly or negative word. Often, I felt he was sad; but always he tried to understand and even lovingly supported his brothers and sisters, disciples and students.

The culmination of that conquest I experienced in the Maha Kumbha Mela. Swamiji's heart was overflowing with love, and from the heart of Swami Chidananda Saraswati (Muniji) issued so much love and devotion for him that I often felt tears in my eyes. When finally through the grace of the Himalayan Tradition, Swamiji was standing between the Shankaracharya and the Dalai Lama, and Muniji celebrated with all of us the Saumya Mantra, my heart felt a fullness like never before, because my longing was fulfilled to work together in a stream of mankind. It is an ever-flowing stream which does not distinguish between religions, cultures and differences, but which is living for the teaching of self-conquest as a necessary condition of peace for all human beings, sharing and respecting their own values and rituals, their honesty and authenticity.

Shri Swami Veda, the Shankaracharya, and the wonderfully humble and so powerful Dalai Lama invoked the presence of our Guruji and created a family of worldwide conquerors of their own little egos, guided by the love of the heart, by the deepest compassion, and by the voice of their conscience. The day after this joint ceremony, Swamiji invited the presence of the spirit of our Guruji through the recitation of the "Akanda Mandala Mantra" and gave wonderful initiations to eight brothers and sisters. The presence of our Guruji showed to me the conquest and the acceptance of Shri Swami Veda, and I remembered Swami Rama saying to me in 1994 at the Ashram in Rishikesh: "A man like Swami Veda, of his quality and wisdom, such an accomplished meditator you can search for in all India."

The experience of pure love and devotion, and the deepest respect for every living being vibrating from Shri Swamiji's heart all these days, and the deepest love and respect he received openly in public from the Shankaracharya, the wonderful Dalai Lama and Muniji, is evidence enough for me that the Himalayan Tradition has a worthy successor, whom I have had the pleasure and grace to serve for the last 20 years, and whom I will serve to the end of his life. Shri Swami Rama had always said that our path is the path of self-conquest; and Swami Veda has shown that he is presenting that path through his own conquest.

Seeing and experiencing the deep love Muniji showed Shri Swami Veda, my beloved brother Ingo from Berlin and I felt an experience of ourselves bathed in love, devotion and selfless service. On two occasions came the vision of our Guruji upon us, honoring us with grace and blessings. In deepest gratitude and reverence, and with all the love in my heart, I bow before my beloved elder brother and spiritual guide. 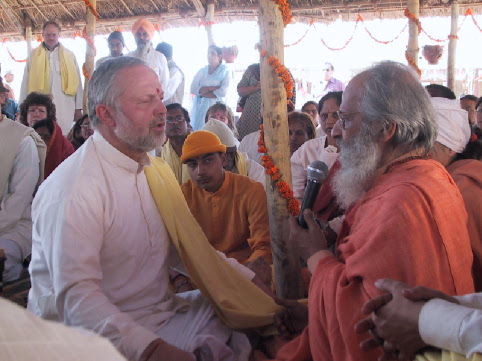 Mr. Bischoff is the founder and director of the very active and successful HIMALYA INSTITUT in Hamburg, Germany. He is a long-time student of H.H. Swami Rama and Swami Veda.