LET US BUILD CATHEDRALS OF PEACE

A few thoughtful quotes from Ronald Reagan, looking at America, Americans and the world at the end of the year 2001. 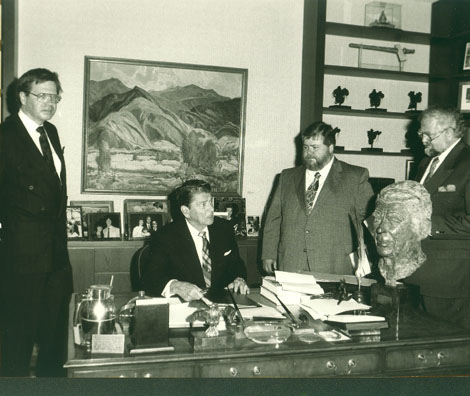 Ronald Reagan at his desk with Consul John Zavrel, Ron Voth and Kurt Arentz in Ronald Reagan's office in 1991.

"Let us build cathedrals of peace, where the people are free."

"In America, our orgins matter less than our destinations. And that is what democracy is all about."

"We believed then and now: There are no limits to growth and human progress when men and women are free to follow their dreams. And we were right to believe that."

"Some may try and tell us that this is the end of an era. But what they overlook is that in America, every day is a new beginning, and every sunset is merely the latest milestone on a voyage that never ends. For this is the land that has never become, but is always in the act of becoming. Emerson was right: America is the Land of Tomorrow."

"Freedom is the right to question and change the established way of doing things. It is the continuous revolution of the marketplace, and the understanding that allows us to recognize shortcomings and seek solutions."

"The explorers of the modern era are the enterpreneurs; men with vision; with the courage to take risks, and faith enough to brave the unknown."

"You know, when I called the Soviet Union an Evil Empire, I meant it."

"It's time we asked ourselves if we still know the freedoms intended for us by the Founding Fathers. James Madison said, "We base all our experiments on the capacity of mankind for self-government." This idea that government was beholden to the people, that it had no other source of power, is still the newest, most unique idea in all the long history of man's relation to man."

"I believe it is clear our federal government is overgrown and overweight. It is time for our government to go on a diet."

"We've gone astray from first principles. We've lost sight of the rule that individual freedom and ingenuity are at the very core of everything that we've accomplished. Government's first duty is to protect the people, not run their lives."

"Freedom is not created by government nor is it a gift from those in political power. It is, in fact, secured more than anything else by limitations placed on those in government."

"Freedom is a fragile thing and is never more than one generation away from extinction. It is not ours by inheritance; it must be fought for and defended constantly by each generation, for it comes only once to a people. Those who have known freedom, and then lost it, have never known it again."