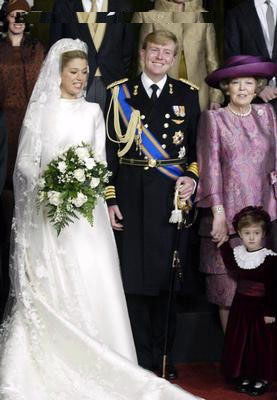 The wedding of H.R.H. Prince Willem-Alexander and Princess Maxima.

Den Haag/New York (bpb) The Order of Alexander the Great for Art and Science paid salute to the Crown Prince of the Netherlands and his young wife, Princess Maxima on the occasion of their wedding on February 2, 2002, in the city of Amsterdam. The Order has special relations to the Royal Families in Europe. In the past, many members of Royal families were admirers of Alexander the Great and member of the Order.

The Prince of Oranien received, in addition to his traditional Royal name William, also the classical name Alexander in memory of this great historical personality. This name was added by Queen Beatrix and Prince Claus of Amsberg, his German-born father.

The Chancellor and the Grandmaster of the Order have sent a message of congratulations to the Royal couple. The message of greetings reads as follows: 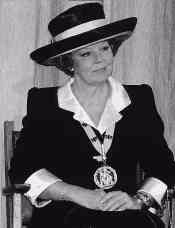 Queen Beatrix of the Netherlands in 1996 accepts the Award "Internationaler Karlspreis der Stadt Aachen". This Award honors statesmen for their engagement for European unity. Among the prize recipients are the former US President Bill Clinton, the Czech President Vaclav Havel and Henry Kissinger.