The Olympia Stadium in Berlin 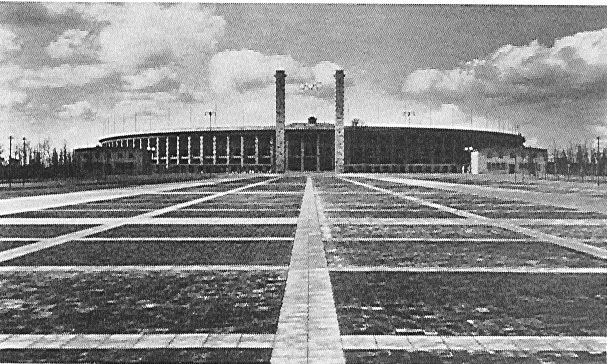 The Olympia Stadium in Berlin.

Berlin/Salt Lake City. It is a very long road from the place Olympia in the Greece of antiquity to Salt Lake City, where the modern winter Olympic Games 2002 will take place. When one has already visited the historical places in Greece, he is impressed by the stadiums and arenas, in which competitions took place thousands of years ago. Even today many of these places are used for sport, theater and music performances.

The architecture of these grounds remains unforgettably etched in the minds of those who have seen them. That makes clear to us that Olympic Games, and the architecture appropriate to them, exercise a special fascination on the people. And here we will see, whether the modern, lavish arenas of our time will prove to be so enduring over the centuries as the stone and marble blocks of the ancient cultures of Grece and Rome.

One of the most impressive grounds of the 20th century is in the German capital Berlin. There, the Olympic Games of 1936 took place, at which the people of the world--and also the United States--were guests of Adolf Hitler. How things went in Europe after this "Festival of Peace" -- with war, destruction and the bad ending -- we know in the meantime from the most recent history.

What is left are the magnificent grounds of the Olympia Stadium, its squares and buildings in Berlin. For many, this is the very best Olympic architecture of the 20th century. The Olympia area in Berlin was neither destroyed by the bombings, nor turned into wilderness by the angry people after the lost World War II.

The English protect the Olympic grounds for nearly 50 years

The Olympic grounds are located in western Berlin. That they exist to this day is primarily thanks to the British occupation forces. After 1945, they moved into some of the important buildings and protected the grounds from vandalism. During the 40 years of use by the British, the English also renovated a part of the Olympic buildings. During the years of their occupation, also Queen Elizabeth II was a guest here, among others. On the so-called "Reich Sport Field Adolf Hitler" the Queen inspected the parade of the British troops. Then, the victorious Great Britain had no problems with the most recent German history.

Today, the Olympia Stadium is used primarily for soccer matches, as well as sport events. There are public swiming halls and sport squares. In addition, there is a Sports Museum established here. The grounds are under state protection as a historical site. That means: no significant changes in the buildings are allowed.

The concept for the Olympic grounds in Berlin was made already before the National Socialists came to power. The architect of the grounds is Werner March (January 17, 1894-January 11, 1976). Already around 1900, the land of the present grounds was foreseen for sport use. After the National Socialist state seized power, the plans were revised by Hitler's architect Albert Speer. During the process, the preliminary drawings from 1920's were expanded. Everything was to be even more beautiful and greater. The grounds would be more representative and more classical. By shifting down into the ground the sports field and the grandstands, it was achieved that the Olympia Stadium, viewed from outside, appears smaller than it really is inside.

The largest Olympic grounds in the world

On December 14, 1933 Hitler gave permission to start construction. In the "Vossischen Zeitung" Number 560 (the leading Berling newspaper of the day), the project was introduced to the people on December 16, 1933. Hitler is quoted in the newspaper as follows: "On this day, I have given my final approval for the the beginning and completion of construction on the Stadium grounds. With it, Germany receives a sports arena, which is searching the whole world for its equal..."

The construction costs were then estimated at 14 1/2 million German marks. The fee for the architect and his colleagues amounted merely to a little over 300,000 marks. On the Olympia grounds 500,0000 can attend the various events. The number of people could be even higher, if we count the people who took part in the parades. The grounds were built by the Reich leadership also with the goal to show off the strength of Germany by staging propaganda events here.

It is to be noted with approval, that architect March and architect Speer have oriented their designs after the examples of the antiquity. To that belongs also the incorporation of works of art into the complex. So, even today bronze and stone sculptures are to be found here by the sculptors Arno Breker, Georg Kolbe and Josef Thorak.

Unfortunately, there is not enough space here to adequately describe these unique Olympia grounds. Instead, we recommend to the readers to visit by all means also the Olympia Stadium during their next visit to Berlin. It is a tourist attraction where antiquity, history and the present meet. 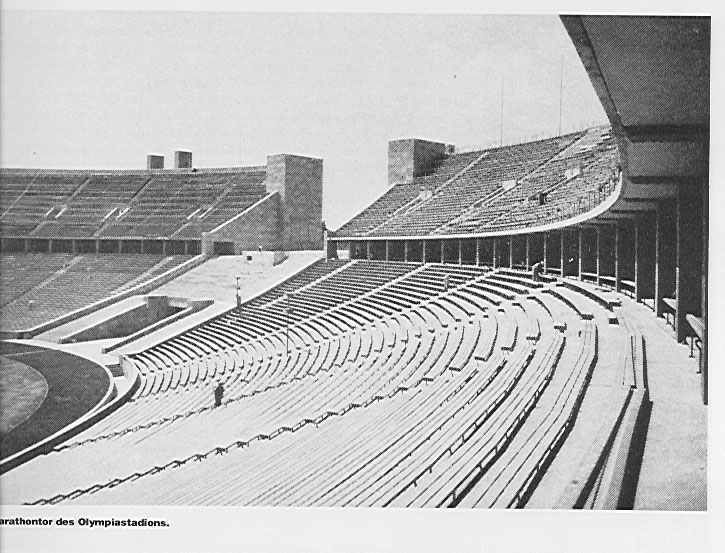 Inside the Olympia Stadium in Berlin, looking toward the Marathon Gate. 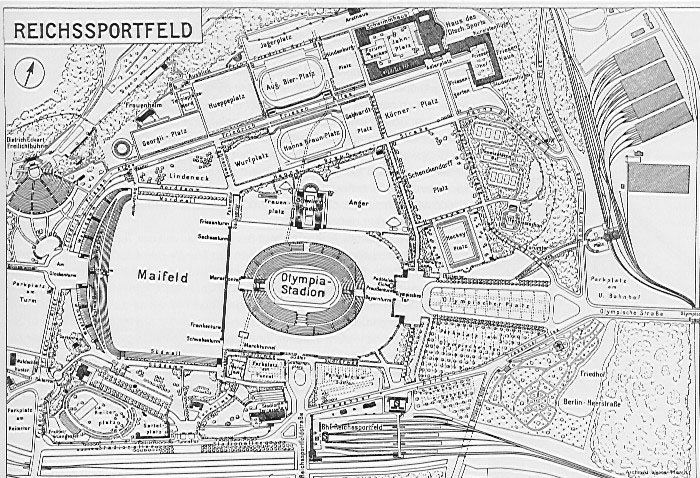 Map of the Olympia Stadium grounds in Berlin.