The portrait of Moissey Kogan

Memories of a Jewish Sculptor in Paris 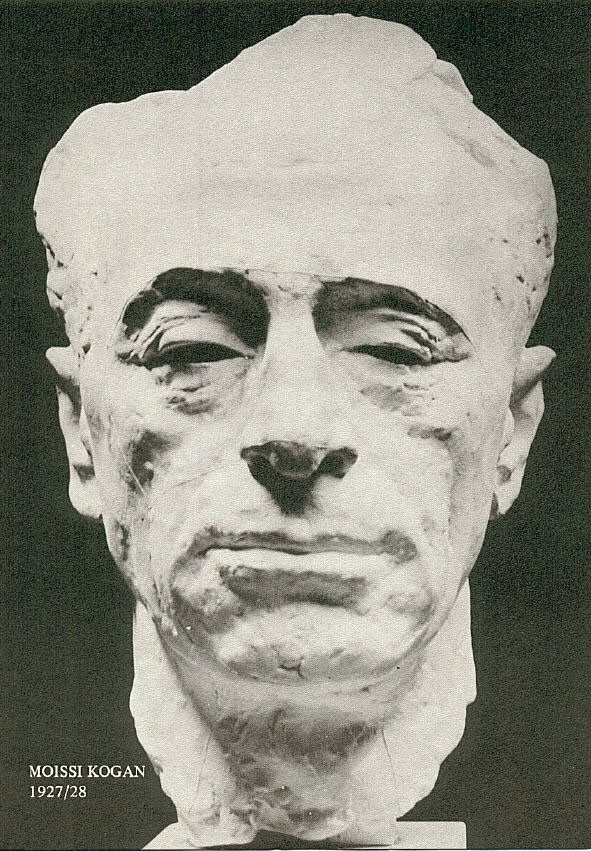 Moissey Kogan, Portrait of the artist by Arno Breker, 1927, Paris

Paris (bpb) When one goes through exhibitions and galleries in Paris, one can hardly find anything by an artist, who had once lived in this world metropolis: Moissey Kogan. Kogan was born in 1879 as a son of a small Jewish businessman in Orgjejeff in Bessarabia, today's Romania. Through the help of Jewish relatives he was able to establish himself in Paris around 1900. There he belonged to the highly talented, yet financially little successful artists.

Therefore, today the existence of a bust of Kogan, which the young sculptor Arno Breker created in Paris in 1927, is so much more valuable. Kogan was then already 48 years old, thus 21 years older than Breker. The bust is now in the collection of the Museum of European Art in the Bodenstein Castle near Köln. It was discovered there by the writer Dr. Hermann Lohausen and published in his publication "The portraitist--Arno Breker". Thus isthe evidence of this friendship publicly documented, like in the case of the bust of Max Liebermann and the death mask of Liebermann. Breker has taken it during the Nazi times in 1935 in Liebermann's house on the Pariser Platz in Berlin, near the Brandenburg Gate.

Moissey Kogan was a modest, earthly artist, recalled Breker (1900-1991). He had not noticed about him any kind of envious feelings toward other artists, who were commercially more successful, "Kogan was always hoping for the big breakthrough", described him Breker. After Breker left Paris to go to Rome and Germany, te two friends have lost sight of one another.

Picasso's art dealer Daniel Henry Kahnweiler described Kogan as "not easy". In a talk with Breker's publisher Joe F. Bodenstein, Kahnweiler said in 1975 that Kogan, in comparison to Picasso, worked very slowly. "Seldom had he ready what a buyer wanted. And that makes problems for art dealers", said Kahnweiler. One cannot do much for the career of artists who are not solidly dependable.

After his 50th birthday, Kogan retreated more and more from the public view. At the beginning of 1930's it was even rumored that he had already died. The Swiss art collector Edwige Soder heard that Kogan has retreated during the World War II, in order to avoid presecution as a Jew. At the same time it was rumored that he had joined the French resistance movement to fight against the Germans. It is also possible that Kogan died in a German labor camp in 1942. The historical research of his life continues.

His dream about large sculptures

It was Kogan's innermost wish, to be able to make also large sculptures. Like Auguste Rodin (The Burghers of Calais, the Balzac Monument) or like Aristide Maillol. Kogan expounded large, monumental female figures as monuments to important people. But for Kogan, there were no clients to fulfill his dreams. And he himself did not have the money to finance such works on his own.

So finally he did, what he was able to afford. He made drawings of his visions of sculptures on paper, up to two meters large. He was able to roll us these sketches, store them for later use, and sometimes even sell them. The preferred motiv for Kogan was the nude, above all the female. For drawings he used coal, chalk and red pencils. That was according to the tradition of Auguste Renoir, Maillol, Charles Despiau and Rodin.

For the sculptural works Kogan used above all clay and ceramic materials. Thus he was able to form his sculptural works with powerful eroticism. Like his countryman Constantin Brancusi (1876 Pestisani, Romania--1957, Paris) also Kogan tried to use wood. Such a sculpture was actually much cheaper, than one made from bronze. One did not have the expenses of making the forms and casting.

One day Kogan, full of pride, showed to his visitor Breker a huge tree trunk, which someone discarded in front of his atelier. Somewhere nearby, during a big storm, a tree broke in the strong wind Kogan grabbed the wood like a found treasure. Then he divided the trunk with lines into the sizes of the planned scultures, which he wanted to make from it.

As Breker came back to visit Kogan the following spring, the tree was gone. In joyful expectation Breker wanted to know, what has happened with the figures. Yet there were no artworks to be seen around. "Everything already sold?", asked Breker.

Kogan shook his head and pointed to the wood stove in his atelier. "The tree got away through this small door", said the sculptor. "But it has warmed up the winter months for me."