Misha Eingorn: The Master of the Xylophone visits the Museum of European Art

Born and raised in St. Petersburg, Russia--one of the best xylophonists in the world--performed for presidents, kings and others in 45 countries--his unique xylophone is over 100 years old 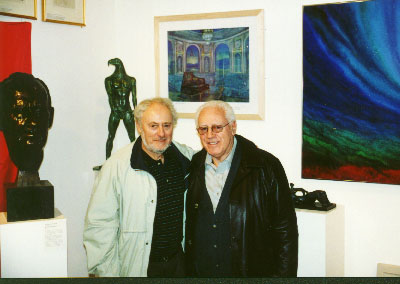 Toronto painter Edward Tabachnik (left) with his old friend Misha Eingorn, one of the best xylophone players in the world, visiting the Museum of European Art.

Clarence/New York (mea) "Tomorrow we will celebrate our 30th anniversary of leaving the Soviet Union, me and my friend Edward Tabachnik. We were on the same flight 30 years ago, on October 27, 1972, flying with our wives from Moscow to Vienna, Austria", remembered the 71-year-old musician. "That's how we met, and we stayed friends all these years".

The painter Edward Tabachnik from Toronto brought his old friend to the Museum of European Art in Clarence, New York to show him the interesting collection of 20th century European art. Above all the guests were interested in seeing the Museum's copy of the "Golden Bible" by the Viennese painter Ernst Fuchs, the only surviving member of the artist-friends Salvador Dali, Arno Breker and Ernst Fuchs.

Misha Eingorn was born and raised St. Petersburg (formerly known as Leningrad), Russia. He graduated from the St. Petersburg Conservatory and performed for years with the St. Petersburg symphony orchestra as a percussionist. After he won the First Prize at the 1958 International Music Competition in Moscow, he was recognized as one of the best xylophonists in the world.

Since becoming a xylophone soloist in 1959, Misha Eingorn has performed in over 45 countries. He gave performances in great concert halls, including Carnegie Hall and Avery Fisher Center in Lincoln Center, New York. As a star-musician he was invited to special receptions to entertain dignitaries such as Prime Ministers, Presidents and Kings. Often he performed together with the popular stars. Lately, he started to perform as Guest Entertainer on cruise ships. The xylophone on which Misha performs is a unique, valuable musical instrument over 100 years old.

He presented the Museum of European Art a CD of his music, a selection of 13 lively, happy and romantic pieces ranging from a 'Hora Staccatto' to Gypsy Dance, Hungarian Czardasz, Sabre Dance, Israeli and Russian songs, to 'Lara's Theme' from Dr. Zhivago and a selection from 'Fiddler on the Roof'. In one special piece, 'Evening Song', he was accompanied on the piano by the famous pianist Simon Kagan.

Misha Eingorn now lives in semi-retirement with his wife in Manhattan, New York City. Also his son Alex Eingorn, a prominent chiropractor, has his very successful practice there. Recently Misha published a small booklet of short anecdotes from his experiences during his years of performing and travelling around the world. "You know what was the most requested tune of the 20th Century? 'Lara's Theme' from Dr. Zhivago... and when I used to play it in some New York night clubs, I always charged $ 25 more, because Dr. Zhivago was a specialist', remembered Misha the xylophone player.