The secret life of Marc Chagall 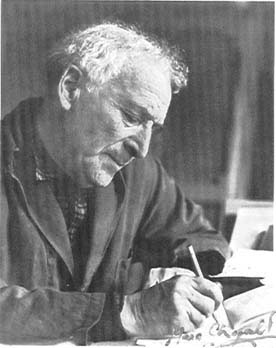 The painter Marc Chagall writing a dedication for his friend Arno Breker.

Paris. (aa)--The secret life of Marc Chagall --includes things which are highly interesting for the friends and art lovers of this fascinating painter. Unfortunately, it is a seldom discussed fact that the Jewish painter, who achieved world renown, had a special connection to Germany. The Germans, after the end of the war, from 1945 on, have bought more works by Chagall than all the art lovers in other countries. And that especially pleased him.

The unusual affair of Chagall with the Germans began actually already in 1920s. It was in Berlin where Chagall had created his first graphic works. He was promoted there by the Jewish art dealer Paul Cassirer, who had thrown also a few glances toward the young Arno Breker.

Chagall's world career led over Germany. And this is how it happened:

Chagall was born on July 7, 1887 in Witebsk, in the former White Russia. After his art education during the time of the Czar in St. Petersburg, he moved in 1910 to Paris. Chagall was 23 years old, as he began to create his first works on the Seine. A year later he moved into the atelier "La Ruche". The handsome young man with curly hair moved mostly in Jewish circles. Already back then the young bachelor met prominent people, who supported him. Among them were the poet Max Jacob and Guillaume Appolinaire.

"I knew a number of people, but had hardly any money to live on", remembered Chagall later. He told me: "It was good luck, that through Appolinaire I came to know the German friend of arts, Herwarth Walden."

That had to be in the year 1913. Already a little later--in April 1914--Walden arranged in his gallery "Der Sturm" in Berlin the first one-man exhibition of Chagall. That was a great privilege.

The stay in Berlin awoke in Chagall again his longing after his village home in Russia. Berlin was located, so to say, half-way between Paris and Witebsk. In 1915 Chagall married the Jewess Bella Rosenfeld in Moscow, and in 1916 their daughter Ida was born.

Arrangement with the communists did not work out

Chagall tries to come to an arrangement with the new people in power after the communist October Revolution in 1917. He was even an "Art Commissar" in the Witebsk area. This official position was an important post in the Soviet Union, with the task to root out the cultural achievements of the time of the Czars. But it came to tensions and quarrels with the officials. Chagall gave up. In 1920 he moved to Moscow. There he barely made a living for over a year as a drawing instructor in an orphanage near Moscow.

The miraculous rescue from economical poverty and political misery happened thanks to his emigration to Germany. Later, among his friends, Chagall called the year 1922 an especially lucky year, which was crucial for the future. It led over Berlin. Chagall had permanently left the Soviet Union.

The German capital Berlin, with a large, blooming Jewish community was the first place for his successful future. Now, the influential art dealer Paul Cassirer became really interested in Chagall. He gave him the very first commission of his career, to make at least 20 illustrations for Chagall's autobiography "My Life." Chagall had composed the text a year before in Moscow. In order to be able to fulfill Cassirer's wish, Chagall had to learn the graphic techniques. The expert at the time, Hermann Struck instructed him in the use of metal plates, corrosive liquid and engraving tools.

"I also used the opportunity to learn much about Germany", recalled Chagall later. He travelled by train to the south of the country. He liked especially the Black Forest. He had also good impressions from trips to Thüringen and to Bad Blankenbug.

On one such trip from the Black Forest to Berlin, there occured in 1922 from today's viewpoint an unusual encounter. Chagall recalls:

"A young man entered into the train, and he asked shyly, if there was a free space. There were only two old ladies in the compartment", wondered Chagall later.

"He sat across from me, and after a short drive the stranger took out from his bag a package with food. As if he were an old acquaintance, he offered me some. The fresh butter smelled so great. And I could not and would not refuse. Because I was hungry."

But Chagall returned the favor, according to his description, on the spot.

"I had a small bottle with vodka on me. We make a toast to our health." At that they introduced themselves.

"Aron?" asked Chagall. "No, Arno. It comes from Arnold", said the man across from him. Chagall mixed up the letters, and from Arno he made the familiar, biblical name Aron.

He answered: "I am Marc." Then he continued to speak in broken German and Yiddish. Chagell realized that the stranger also had a portfolio with him. It was clear to both of them at once, that they had similar professions.

Chagall told me this story in 1950, as he began to concentrate on the production of lithographs at the famous printer Fermand Mourlot in Paris. It was the story of the first personal encounter between the 22-year old sculptor Arno Breker with the 35-year old painter Marc Chagall.

"I showed Breker some proofs of my etchings for Cassirer", said Chagall. Among them were prints like "L'Homme aux Favoris" ("Man with sideburns") and "L'Homme barbue assis, avec une Violon sur le Bras" ("Bearded man seated with violin under his arm").

Breker asked: "Why is everything so dark and sad, why without colors?"

"No money, no colors. Too expensive", said Chagall.

"Just think about the sculptors. A bronze cast costs much more than paper and paint for a grahic", complained Breker. 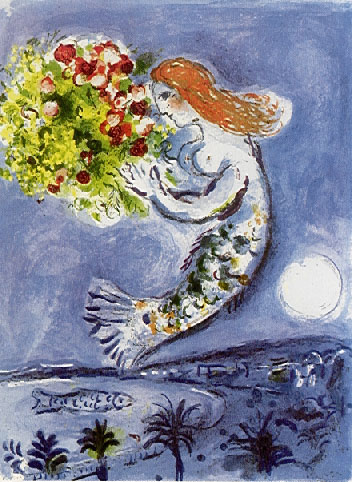 It could be due to the fact that the different careers of the two artists developed in two opposing political systems, that this relationship of the young years was kept secret by both, or was suppressed. Chagall made a career in the United States as a French citizen. He returned to Paris only in 1947.

After the Olympic Games of 1936 in Berlin, Arno Breker received state commissions for the reconstruction of the German capital according to the plans of the architect Albert Speer.

The connections of Chagall to Germany were never broken off. Before the war, he was in Germany repeatedly. In 1925 there was an important exhibition at the Art Society in Köln on the Rhine, where Breker was already established within the circles of important art collectors, and had contact with Max Ernst. In the same year, the Gallery Arnold in Dresden showed the works by Chagall.

A year before Chagall turned down Max Ernst, as well as the poet Paul Eluard and his wife Gala (who later became the wife of Salvador Dali), to join up with the surrealists. Chagall declined and wanted to be independent. "My stay in Germany and the first success have made me strong and self-conscious", told me Chagall in 1950s.

As with Henry Mooreand Pablo Picasso, relationship of Chagall to Breker was a conscious, long distance. Chagall found out from Mourlot in 1973 that Breker, at the age of 73, also became more interested in lithography. Mourlot as well as Chagall's master printer Charles Sorlier took care of the lithographs, which Breker made in Mourlot's atelier. There he saw the colorful works of Chagall, and he remembered the first graphic works of Chagall in Berlin, made for Cassirer in black.