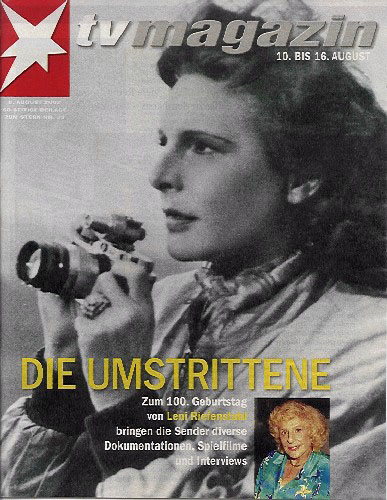 Leni Riefenstahl on the cover of the TV magazine Stern in August, 2002. Shown as the beautiful, young photographer and as an old lady, who at her 100 years would still like to realize many art projects.

München (bpb) Leni Riefenstahl will celebrate on August 22, 2002 her 100th birthday. She was born in 1902 as a daughter of a salesman and equipment installer Alfred Riefenstahl and his wife Bertha. She made her career as a dancer, movie director and photographer. Her films and documentaries made in the Third Reich are to this day cult objects. She has survived all the diffamation and discrimination, and also the accusations that she was Hitler's girlfriend or lover.

About that she would always say: "They kept asking me over and over again whether I was having a romance with Hitler. 'Are you Hitler's girlfriend?' I laughed and answered the same way each time: "No, those are false rumors. I only made documentaries for him…"

Much has been reported over the years about this woman of the highest artistic achievements, who in her young years was a stunning beauty. Here it is not necessary to bring more praises to her. She said already back in 1975 to Arno Breker's publisher Joe F. Bodenstein about herself: "From certain people I have been showered only with dirt. But let me tell you this: these people will not succeed to badmouth me to death!"

Riefenstahl admired the "magnificent work" of the sculptor Arno Breker. Also he was enchanted by Riefenstahl as a photographer after 1945. Breker belonged to the first collectors of her photograph volumes about the Nubas, which the media described as the "Aryans of Africa". On seeing the photos of the colored Africans, Breker said: "A wondeful body architecture."

On the occasion of the 100th birthday, especially the media in Germany are bringing out documentaries, films and interviews. To them belongs also the TV-edition of the leading magazine STERN.

Her friends worldwide can only say: Happy birthday, Leni Riefenstahl !