President Bush gets German support for his Korea policy

Koschyk: South Korea is an important partner of the free world--common suffering and common German-Korean interests in business and culture 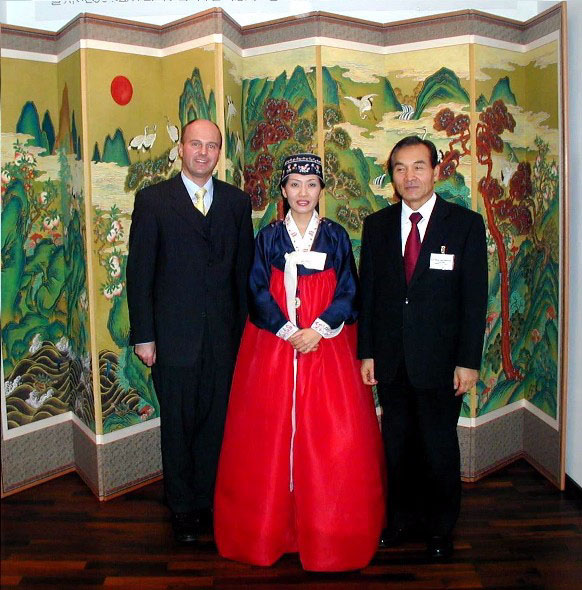 The South Korean ambassador Hwang Won-tak (right) in Berlin and the chairman of the German-South Korean parliamentary committee Hartmut Koschyk (CSU) with the musician Kwak Soo-eun. This master of classical South Korean musical instruments and music played at the cultural event at the Korean Embassy in Berlin.

Seoul/Berlin (bpb) The world-wide fight of the United States and their allies against terrorism at the beginning of the year 2002 distracts the public interest from other crisis spots. To them belongs the Asian country of Korea. It is divided into a communist North Korea and the free South Korea. The people of North Korea have been hoping for many years for a political help for a unification in freedom. The United States and Germany belong to the biggest supporters.

"Germany helps also the conceptions of the US President George W. Bush to advance the cooperation of both countries", said the German politician Hartmut Koschyk in an interview with Prometheus. The so-called "Sunshine policy" of the South Korean president Kim Dae-jung should contribute to a reconciliation between the two parts. A year ago, Dae-jung received the Nobel Peace Prize for his engagement.

"Germany and the United States support the "sunshine policy" of South Korea, with the goal to speed up the cooperation of the governments in the divided country", said Koschyk. He belongs to the Christian Social Union. (CSU). The politician comes from the city of Bayreuth in Bavaria, where the annual music festival of Richard Wagner takes place. He is an expert on expulsion. In the German Parliament, Koschyk is the speaker for the CDU/CSU on the question of Germans expelled after World War II. "As far as the forced division of the country is concerned, it can be very well compared to Germany", said Koschyk. "We were divided by the Iron Curtain for many decades. The faith in freedom and justice, as well as the clear championship of the unification ideal on the part of all the CDU/CSU governments since the time of the first German Chancellor after World War II, Konrad Adenauer, has finally led to the overcoming of the division of Germany," remembered Koschyk. And here, the German Chancellor Helmut Kohl was able to use this greatest opportunity for unification. Naturally, our allies, above all the United States, gave their political agreement.

In real life, history has shown us that dictatorships, also the communist ones, cannot permanently rule the people against their will. "The German example should encourage Korea to clean up its own errors of the past", advised Koschyk. "That lies also in the interest of North Korea. There are intelligent people who are able to carry on the progress in Asia", explained Koschyk. "A united Korea means naturally also an economic competition in Asia for the West. But we must pay this price in the interest of human rights and democracy."

Koschyk is also the chairman of the German-Korean parliamentary committee in the German Parliament. It has the task to keep alive the political interest in the Korean situation, and discuss current developments in the parliament. "Our sympathies are for all Koreans, both in the North and in the South", stressed Koschyk. "But now it is easier to cooperate with South Korea than with the North. There is a great deal of reserve in their attitude. But we offer our hand to the North Koreans." Despite the cautious stance, in the winter of 2001 Germany has sent as free donation large quantities of beef to North Korea, in order to reduce hunger.

In Germany, also the government of the SPD Chancellor Gerhard Schröder supports the "Sunshine policy" of the South Korean President Dae-jung. "This policy means to support all common grounds between North and South Korea, to develop trust and to improve the living conditions for the people in North Korea through economic cooperation", explains the Ambassador Hwang Won-tak at a cultural evening with politicians in the South Korean Embassy in Berlin. "It is a policy of open heart, and we are happy about the small steps in the dialog", said the diplomat.

The cultural relations between Germany and Republic of Korea are very close. The Koreans like German music and literature. According to the German ambassador in Seoul, Hubertus von Morr, there are some 650,000 Koreans learning German. That is very many, considering that for the Japanese and Koreans the German language is very difficult to learn.

The cultural contacts embrace all areas of the cultural life, from exhibitions about films, music, literature and art to economic cooperation. Also the sport cooperation has a tradition.

At the same time, the cooperation between German and Korean universities is exemplary. Important links between both countries are also some 23,000 South Koreans who live in Germany, as well as many thousands of Koreans who have studied in Germany in the past. In 2002 some 5,000 Koreans study at German universities. The cooperation of businesses is also developing positively. (End)