Is Josef Thorak a forgotten artist? 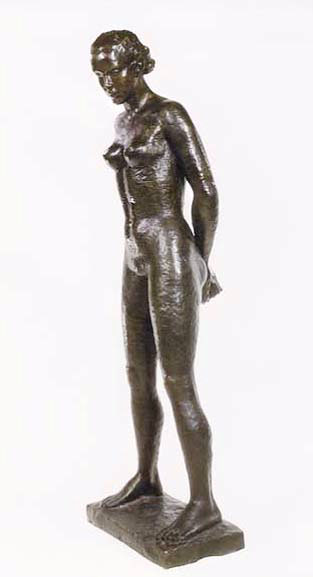 "The Beauty after a Bath", a sculpture by Thorak from 1934/1935. The model was the Czech film star Anny Ondra. She married the boxer Max Schmeling in 1933 in Berlin.

Berlin (bpb). He has created sculptures for the Olympia Stadium in Berlin, as well as for the 1937 World Exposition in Paris: Josef Thorak. Today his work is known predominantly only from photographs. Otherwise, in the year 2001 Thorak can be added to the list of forgotten artists of the 20th century. Since 1945, the work of Thorak is mostly mentioned only in connection with the NS times. The fact is that he did belong to the 'state artists' of the Third Reich. But from the biography it is apparent, that Thorak was a respected sculptor who was able to live well from his work, already before the commissions from the Reich government.

Thorak was born on February 7, 1889 in Salzburg as son of a master potter. In his father's shop, Thorak learned ceramics and pottery. At the age of 23 years he studies at the Academy of Art in Vienna. In 1915 he finally goes to Berlin, in order to continue there his art studies. From 1918 on, Thorak earns his living as an independent sculptor. "Mainly works from wax were created by him at this time, because Thorak had no money to have them cast in bronze", discovered the Thorak biographer Joe F. Bodenstein. "A sculptor, who--in connection with the building architecture--wants to make monumental sculptures needs clients who can finance the bronze sculptures, as well as the equally expensive works in stone.

Thorak found these clients at first in the public sphere. Ultimately, they were the monumental commissions in the NS times, which were awarded by Hitler's architect Albert Speer. Thorak created monuments for public buildings, autobahns and horses for the New Reich Chancellery. Yet already in 1928 he received a state prize of the Prussian Academy of Arts for his work.

Yet the budding optimism created by the allocations from Speer was temporarily damped down. In 1935 Thorak came up against opposition in Berlin. The jury for the artistic composition of the Reich Sport Field at the Olympia Stadium refuses to take into consideration the works of the Austrian. Only on the notice from the NSDAP, that Hitler valued the works of the sculptor, was the attitude changed.

After that, Thorak rise was assured with numerous commissions. He made a name for himself also internationally. He created reliefs for the Kemal Atatürk Monument in Ankara, where the "father of modern Turkey" has his mausoleum.

Also mysticism and tenderness in many works

In an analysis of the medium-size and small-format works of Thorak, the sculptor Kurt Arentz acknowledges "also much mysticism and tenderness" in the works of the deceased colleague. "With hindsight, Thorak is with much unappreciated", said Arentz to the Thorak biographer Bodenstein. "When one knows that Thorak was a great admirer of women, then one understands better that this fellow, in spite of all his rough outside shell was able to render also harmony and tenderness. "An example of that is the figure "The Beauty after a Bath" from 1935, which was almost totally unknown to the public in Thorak's lifetime. At that time, the famous Czech film star Anny Ondra, who lived in Berlin, stood him as model. That the "beautiful Anny" dropped off all her clothes in front of the sculptor, was at first kept as a secret. After all, Ondra was a star. On July 6, 1933 she married the legendary boxer Max Schmeling.

Thorak was known in his young years as a "womanizer" (Weiberer) , as they say in Bavaria about men who especially love to be on the chase after beautiful women. His private life was always a taboo. In his first marriage, he was married to a Jewess. During the Third Reich, she was allowed by the Reich government to leave for England, and did not wish to return back after the end of the war.

After fame and marriage, a broken heart

After the great fame as state artist, Thorak lived from 1945 totally withdrawn and widely isolated in Bavaria. In 1949, his acquaintances say about him that he is a "broken man". In 1951, one year before his death, art lovers wanted to honour the sculptor one more time. On October 20, an exhibition with the works of the old master was opened. In it were included besides Thorak also Sepp Hilz and other artists. There were public protests against this exhibition in the former "House of German Art", in which Thorak as well as Kolbe and Breker used to be formerly regularly shown at the great art exhibitions. The artist is embittered by these attacks against him and complains: "Won't they ever leave me in peace?"

The Bavarian Minister of Culture, Josef Schwalber supports democratic tolerance, and the 'Freedom in Art' that is guaranteed by the German constitutions. He confronts the protesters with the argument: "Paintings cannot be prohibited, just because once upon a time some big Nazi officials liked them."

Thorak dies on February 26, 1952 in Hartmannsberg at the Chiemsee Lake. His death--scarcely three weeks after his 63rd birthday--was caused, according to the doctors, by an asthma attack.