Homage to an Inventor

Introduction by Consul B. John Zavrel,

Director of the Museum of European Art, USA. 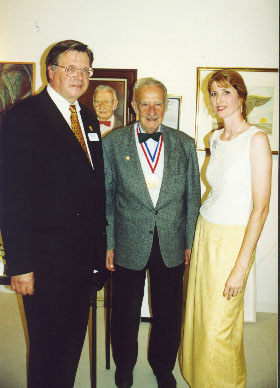 Consul John Zavrel with the inventor Dr. Wilson Greatbatch and the painter Mary McAndrew at the Museum of European Art in Clarence.

Honorable representatives of the Consular Corps,

Dear artists and friends of the Museum !

I have the honor to welcome you to this event. As our co-director Mary McAndrew announced, I would like to introduce you to this initiative, which combines art and science in a very unique way.

The theme is "Homage to an Inventor". And we personify this idea in one inventor, who is a great son of Clarence and an international personality: Dr. Wilson Greatbach. As the inventor of the implantable pacemaker, he made one of the most important contributions for the benefit of mankind.

It is well known, Dr. Greatbatch, that you are not so much fond of being honored in public. But let me force this on you today, and let me say a few words about this Homage to you.

Wilson Greatbatch is not only one of the leading inventors of our time, but also an ideal for social and cultural engagement in our area. As a supporter of culture -- we thank him; as an inventor -- we admire him; and as a human being of vision, humanity and friendship -- we love him.

I feel free to confess this in public, since I have the honor of knowing Dr. Greatbatch since he came to the former Czechoslovakia to attend an international trade fair back in 1965. And over so many years the ties of friendship, respect and trust became stronger and stronger.

In addition to this testimony about Wilson Greatbatch, we have just started something very special: we have founded a new art collection titled "Wilson and Eleanor Greatbatch Collection". This unique collection in the Museum of European Art guarantees to remind people in the decades to come about inventors in general, about Wilson Greatbatch in particular, as well as about the artists and all those who support this project now and in the future.

Artists of our time have already contributed their new works to this Collection. I would like to mention these European artists: Kurt Arentz (Germany), the sculptor Renate Stendar-Feuerbaum (Switzerland), Hugo Haig-Thomas (Great Britain), and others.

The bronze portrait "WILSON GREATBATCH" by Peter Hohberger, which our Museum commissioned years ago, is included in this collection.

Today I am proud to announce that the European Art Foundation in Berlin has promised to contribute to this collection honoring Wilson Greatbatch graphic works of Marc Chagall, Helga Tiemann, the artist friends Salvador Dali, Arno Breker and the Jewish painter Ernst Fuchs, as well as works of the late Jean Cocteau, Aristide Aristide Maillol, Charles Despiau, Jean Carzou and Jean Miro.

With our initiative "Homage to an Inventor" we continue a good European tradition. Many great artists like Picasso, Dali, Breker, Fuchs, Cocteau, George Brauqe, Miro, Alexander Calder and others created works for special occasions to honor colleagues, publishers, writers and poets.

The Museum of European Art and the European Art Foundation are leading this good tradition into a new dimension. Artists honor inventors!

Artists of our time and in the future can contribute to this collection. The portfolio of the museum's collection of drawings, paintings, graphic works, sculptures, and objects of art contains also letters of congratulations, literary text, and other documents.

But the first step on this new way to honor inventors now and in the decades to come has been taken. It was done here and now. And I make it very clear, that this first step is focused on you, Dr. Wilson Greatbatch. You should know that we appreciate very much what you have done and what are doing together with your beloved wife, Eleanor Greatbatch: being an ideal in our society.

A year from now, we will have an exhibition titled "HOMAGE TO AN INVENTOR" of the works of art contributed to our new art collection in the next 12 months. I hope that all of you can join us on that special occasion.

In honoring Wilson Greatbatch, we like to honor all inventors who have brought mankind ahead in a peaceful way, and with human dignity.

I am proud to say this in the presence of the Honorary Consuls of the region. And in a few moments, our good friend, the Austrian Consul Fred Friedman, will introduce to us the members of the Consular Corps.

Now we have the occasion to unveil a new portrait of Wilson Greatbatch.

The painter Mary McAndrew has recently completed this oil painting.

(Unveiling of the painting by John Zavrel and Mary McAndrew)

Allow me to thank you for this great realistic painting. Thank you for lending us your painting to be shown during the next few weeks in our Museum. 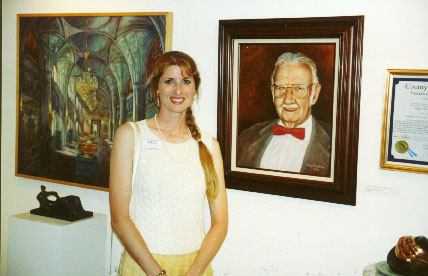 Mary McAndrew after the unveiling of her portrait "Wilson Greatbatch". 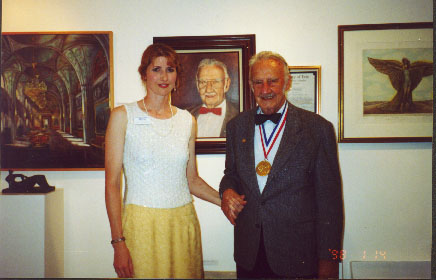 The inventor Dr. Wilson Greatbatch with Mary McAndrew in front of his portrait.

Now I like to ask Consul Fred Friedman to introduce to us the Honorary Consuls. This event tonight is also a good opportunity for us all to meet the consuls for good conversation and to sample some fine wines from the countries they represent.

Consul Fred Friedman, you have the word.

After the introduction of the eight consuls and an address by the Hon. Roger Marsham, the Consul General of Canada, Mary McAndrew read the following messages of congratulation from New York Governor George Pataki, Senator Charles Schumer, and the Himalayan saint-sage Swami Veda: 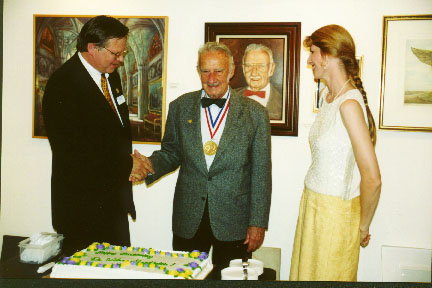 After the speeches, Consul John Zavrel and Mary McAndrew congratulate Dr. Greatbatch as he prepares to cut his birthday cake for more than 200 invited guests gathered at the Museum of European Art in Clarence for this special occasion.